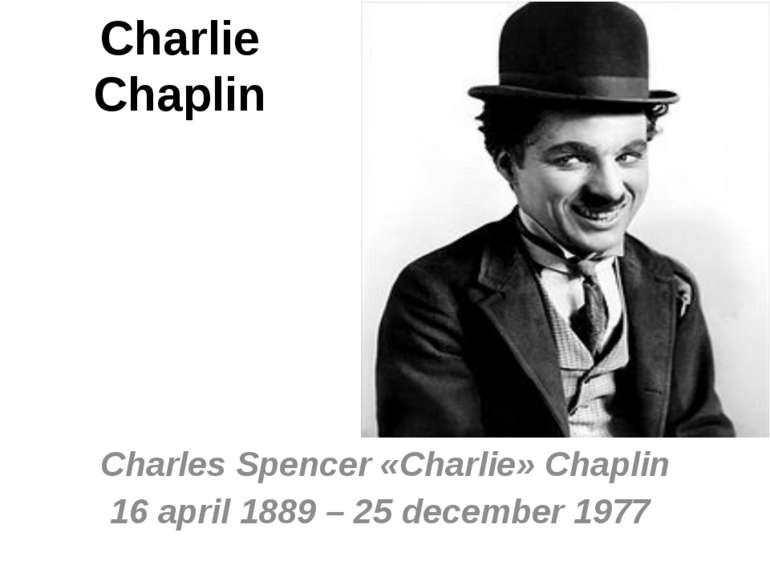 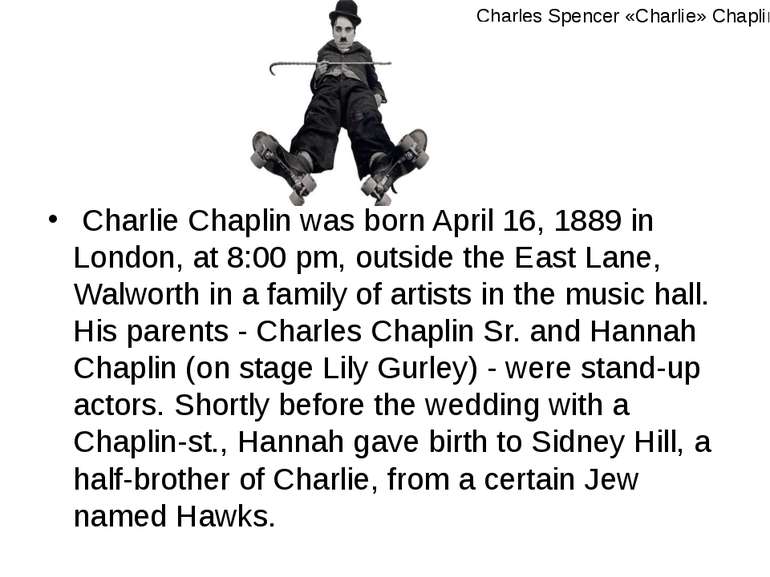 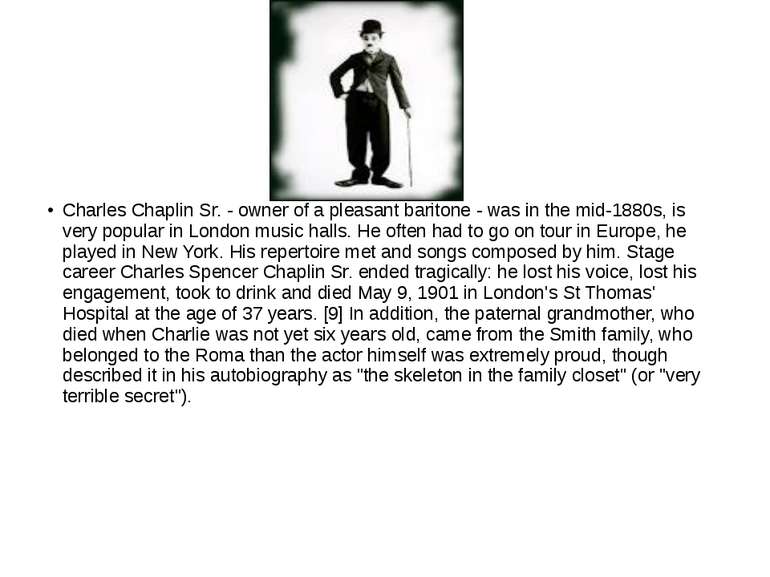 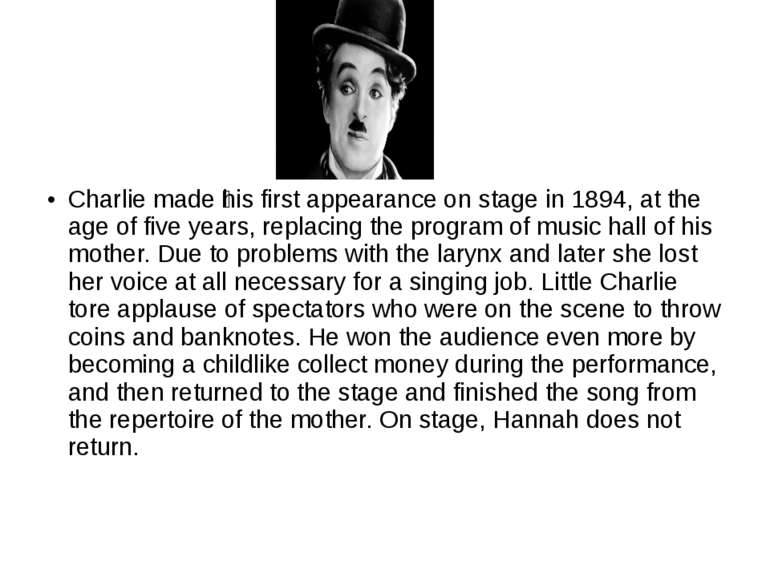 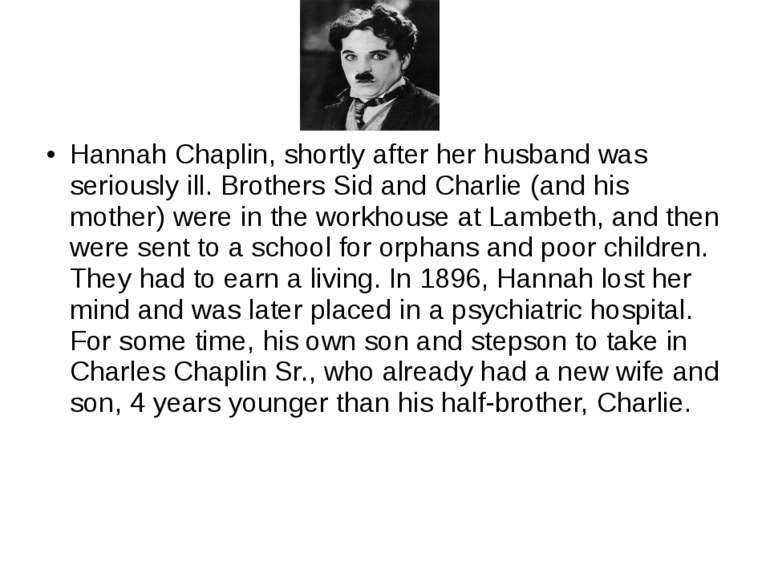 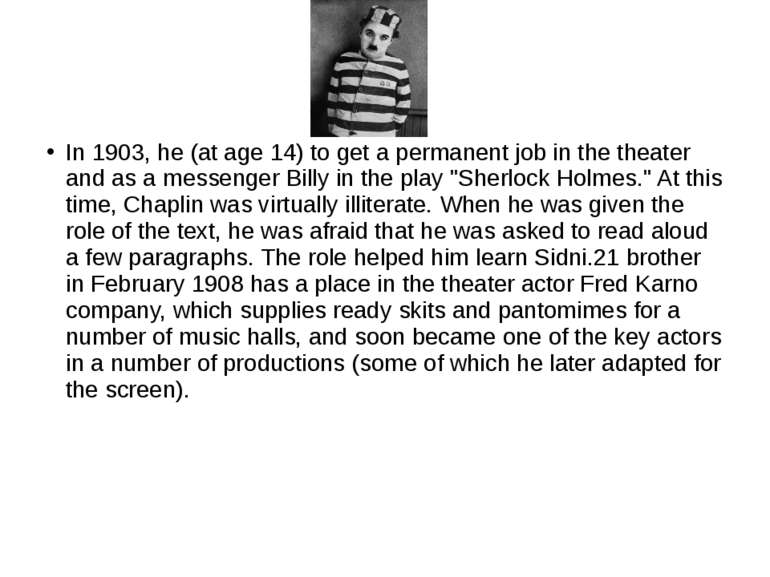 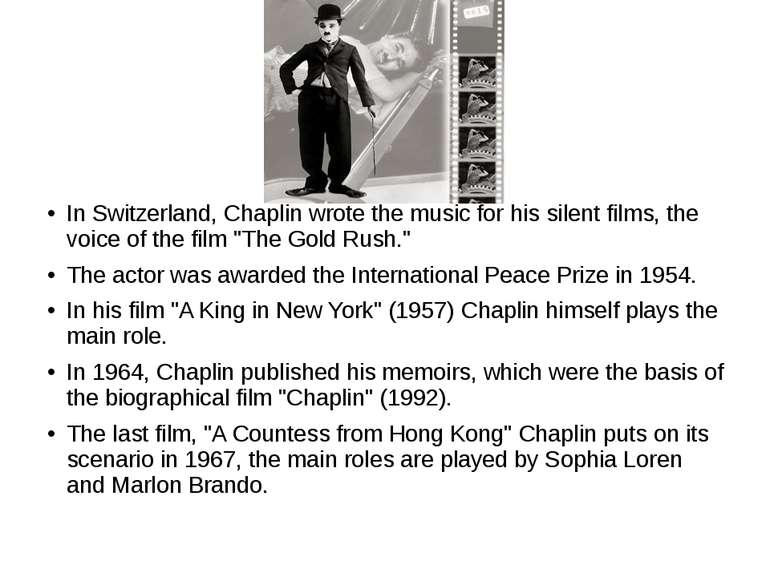 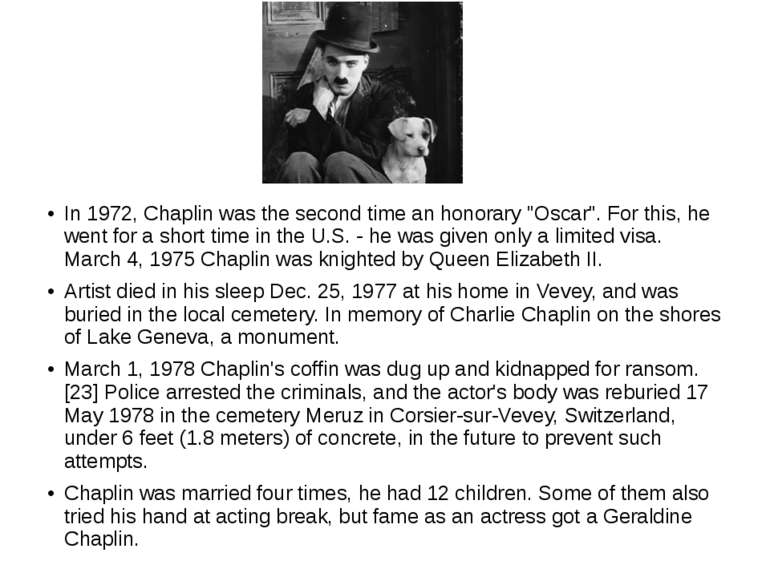 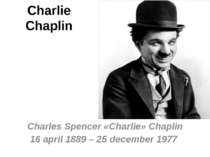 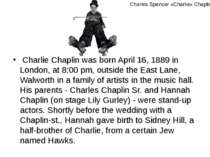 Charlie Chaplin was born April 16, 1889 in London, at 8:00 pm, outside the East Lane, Walworth in a family of artists in the music hall. His parents - Charles Chaplin Sr. and Hannah Chaplin (on stage Lily Gurley) - were stand-up actors. Shortly before the wedding with a Chaplin-st., Hannah gave birth to Sidney Hill, a half-brother of Charlie, from a certain Jew named Hawks. Charles Spencer «Charlie» Chaplin 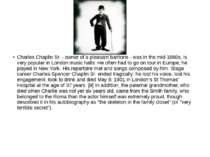 Charles Chaplin Sr. - owner of a pleasant baritone - was in the mid-1880s, is very popular in London music halls. He often had to go on tour in Europe, he played in New York. His repertoire met and songs composed by him. Stage career Charles Spencer Chaplin Sr. ended tragically: he lost his voice, lost his engagement, took to drink and died May 9, 1901 in London's St Thomas' Hospital at the age of 37 years. [9] In addition, the paternal grandmother, who died when Charlie was not yet six years old, came from the Smith family, who belonged to the Roma than the actor himself was extremely proud, though described it in his autobiography as "the skeleton in the family closet" (or "very terrible secret"). 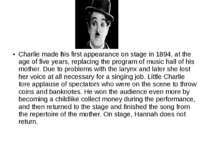 Charlie made his first appearance on stage in 1894, at the age of five years, replacing the program of music hall of his mother. Due to problems with the larynx and later she lost her voice at all necessary for a singing job. Little Charlie tore applause of spectators who were on the scene to throw coins and banknotes. He won the audience even more by becoming a childlike collect money during the performance, and then returned to the stage and finished the song from the repertoire of the mother. On stage, Hannah does not return. 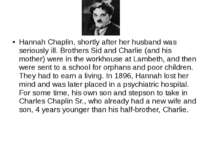 Hannah Chaplin, shortly after her husband was seriously ill. Brothers Sid and Charlie (and his mother) were in the workhouse at Lambeth, and then were sent to a school for orphans and poor children. They had to earn a living. In 1896, Hannah lost her mind and was later placed in a psychiatric hospital. For some time, his own son and stepson to take in Charles Chaplin Sr., who already had a new wife and son, 4 years younger than his half-brother, Charlie. 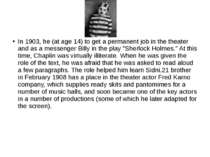 In 1903, he (at age 14) to get a permanent job in the theater and as a messenger Billy in the play "Sherlock Holmes." At this time, Chaplin was virtually illiterate. When he was given the role of the text, he was afraid that he was asked to read aloud a few paragraphs. The role helped him learn Sidni.21 brother in February 1908 has a place in the theater actor Fred Karno company, which supplies ready skits and pantomimes for a number of music halls, and soon became one of the key actors in a number of productions (some of which he later adapted for the screen). 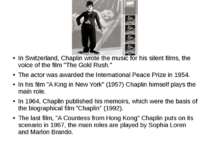 In Switzerland, Chaplin wrote the music for his silent films, the voice of the film "The Gold Rush." The actor was awarded the International Peace Prize in 1954. In his film "A King in New York" (1957) Chaplin himself plays the main role. In 1964, Chaplin published his memoirs, which were the basis of the biographical film "Chaplin" (1992). The last film, "A Countess from Hong Kong" Chaplin puts on its scenario in 1967, the main roles are played by Sophia Loren and Marlon Brando. 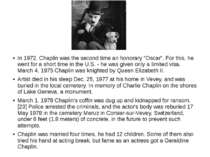 In 1972, Chaplin was the second time an honorary "Oscar". For this, he went for a short time in the U.S. - he was given only a limited visa. March 4, 1975 Chaplin was knighted by Queen Elizabeth II. Artist died in his sleep Dec. 25, 1977 at his home in Vevey, and was buried in the local cemetery. In memory of Charlie Chaplin on the shores of Lake Geneva, a monument. March 1, 1978 Chaplin's coffin was dug up and kidnapped for ransom. [23] Police arrested the criminals, and the actor's body was reburied 17 May 1978 in the cemetery Meruz in Corsier-sur-Vevey, Switzerland, under 6 feet (1.8 meters) of concrete, in the future to prevent such attempts. Chaplin was married four times, he had 12 children. Some of them also tried his hand at acting break, but fame as an actress got a Geraldine Chaplin. 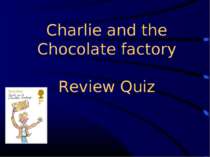 "Charlie and the chocolate factory " 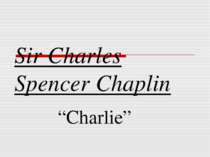