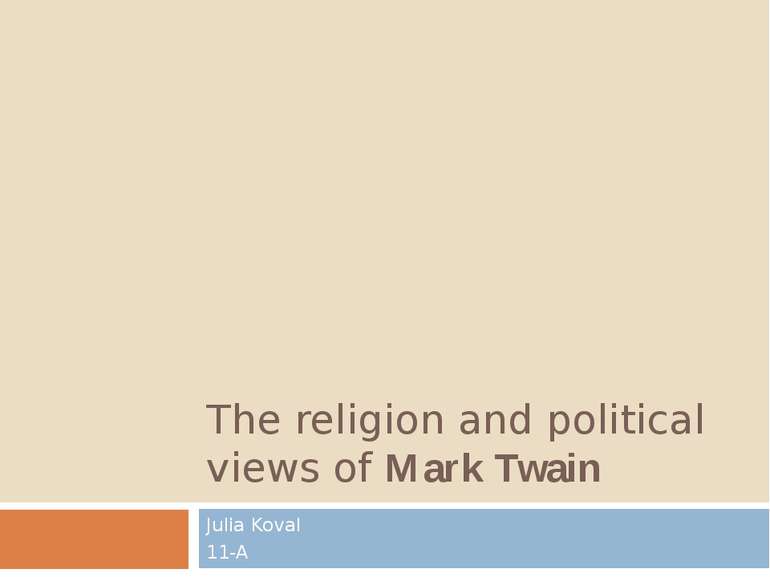 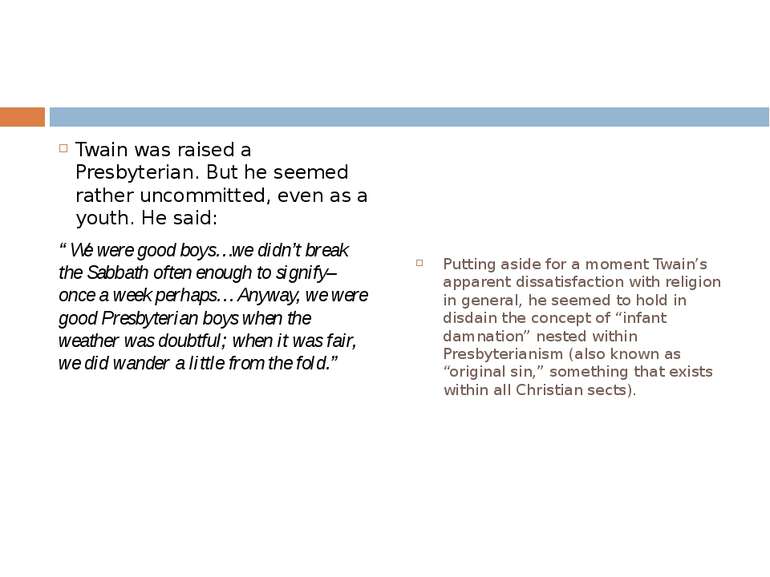 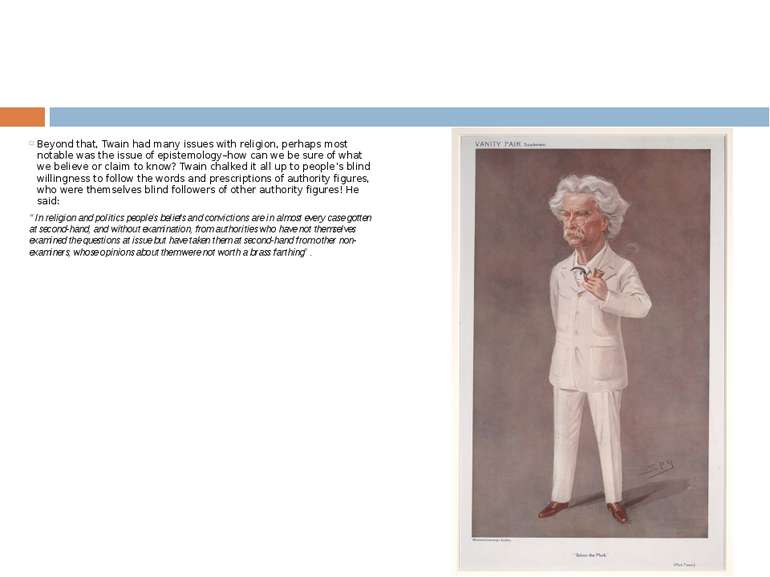 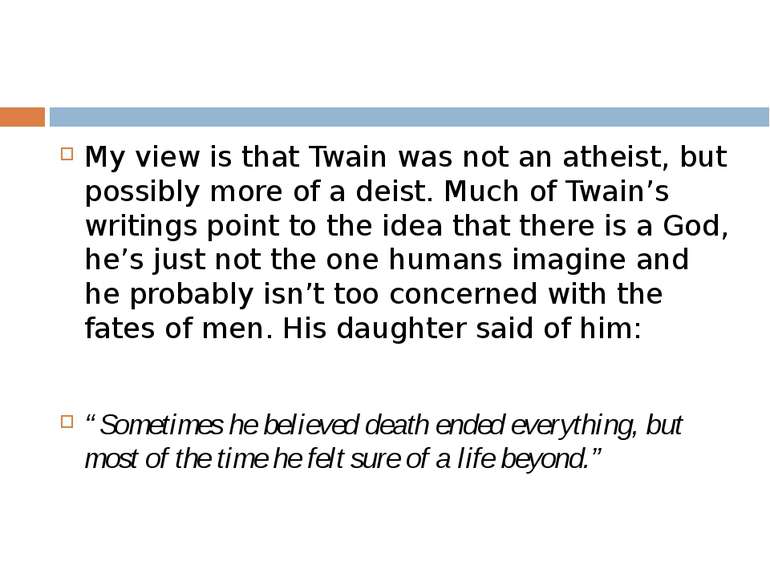 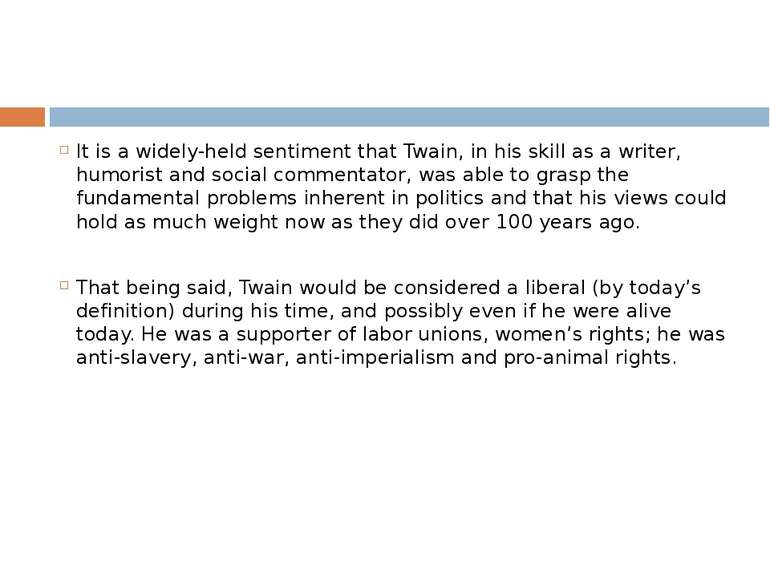 "The religion and political views of Mark Twain" 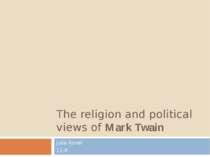 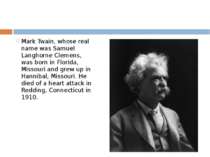 Mark Twain, whose real name was Samuel Langhorne Clemens, was born in Florida, Missouri and grew up in Hannibal, Missouri. He died of a heart attack in Redding, Connecticut in 1910. 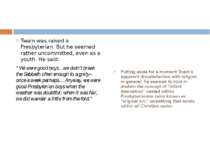 Twain was raised a Presbyterian. But he seemed rather uncommitted, even as a youth. He said: “We were good boys…we didn’t break the Sabbath often enough to signify–once a week perhaps… Anyway, we were good Presbyterian boys when the weather was doubtful; when it was fair, we did wander a little from the fold.” Putting aside for a moment Twain’s apparent dissatisfaction with religion in general, he seemed to hold in disdain the concept of “infant damnation” nested within Presbyterianism (also known as “original sin,” something that exists within all Christian sects).

Beyond that, Twain had many issues with religion, perhaps most notable was the issue of epistemology–how can we be sure of what we believe or claim to know? Twain chalked it all up to people’s blind willingness to follow the words and prescriptions of authority figures, who were themselves blind followers of other authority figures! He said: “In religion and politics people’s beliefs and convictions are in almost every case gotten at second-hand, and without examination, from authorities who have not themselves examined the questions at issue but have taken them at second-hand from other non-examiners, whose opinions about them were not worth a brass farthing”. 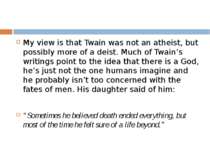 My view is that Twain was not an atheist, but possibly more of a deist. Much of Twain’s writings point to the idea that there is a God, he’s just not the one humans imagine and he probably isn’t too concerned with the fates of men. His daughter said of him: “Sometimes he believed death ended everything, but most of the time he felt sure of a life beyond.” 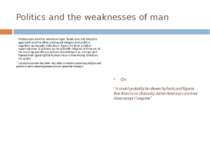 Politics and the weaknesses of man Politics was another sensitive topic Twain was not afraid to approach and he often portrayed religion and politics together–as equally ridiculous. Again, he took a rather nuanced view of politics–as he did with religion, with most of his musings painting a picture of politicians as corrupt and flawed men guiding the human race in the wrong direction. He wrote: “I am quite sure now that often, very often, in matters concerning religion and politics a man’s reasoning powers are not above the monkey’s.” Or: “It could probably be shown by facts and figures that there is no distinctly native American criminal class except Congress.” 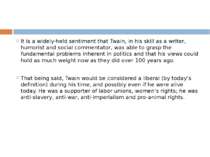 It is a widely-held sentiment that Twain, in his skill as a writer, humorist and social commentator, was able to grasp the fundamental problems inherent in politics and that his views could hold as much weight now as they did over 100 years ago. That being said, Twain would be considered a liberal (by today’s definition) during his time, and possibly even if he were alive today. He was a supporter of labor unions, women’s rights; he was anti-slavery, anti-war, anti-imperialism and pro-animal rights. 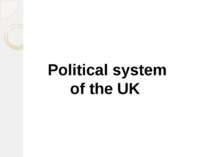 Political system of the UK 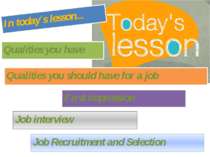 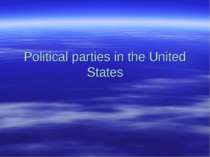