Презентація на тему:
The Big Three Names of the Renaissance 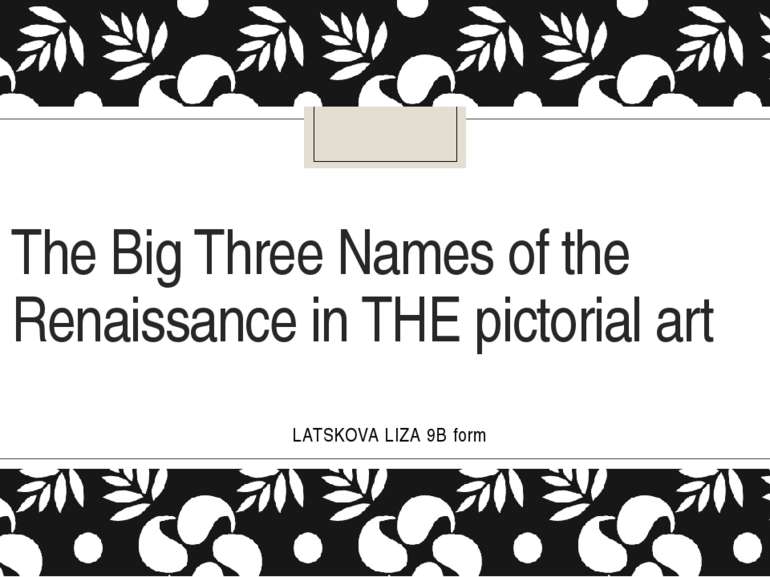 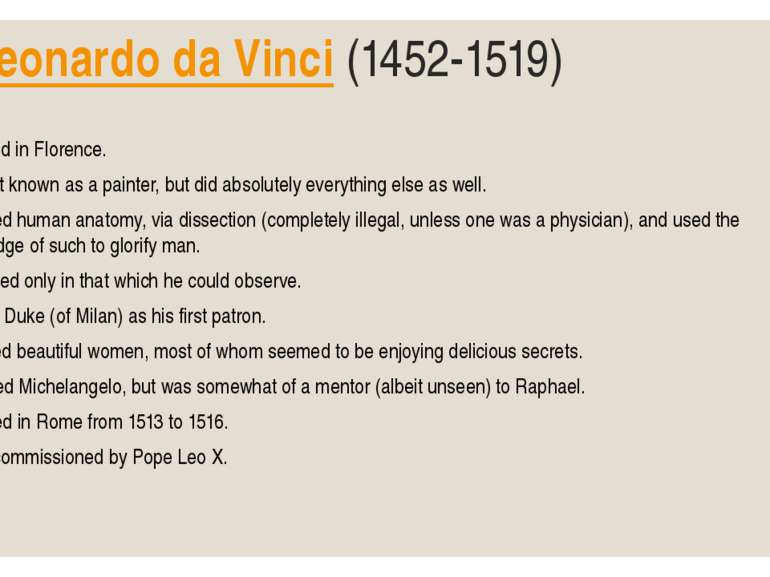 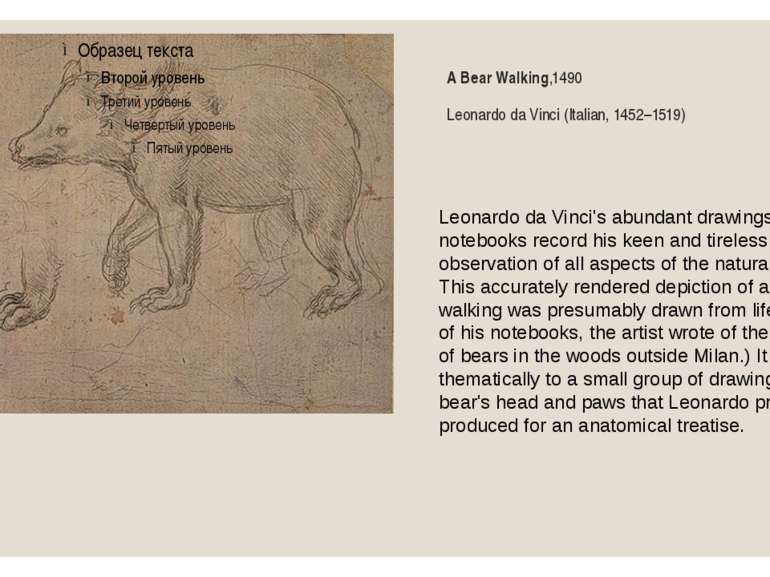 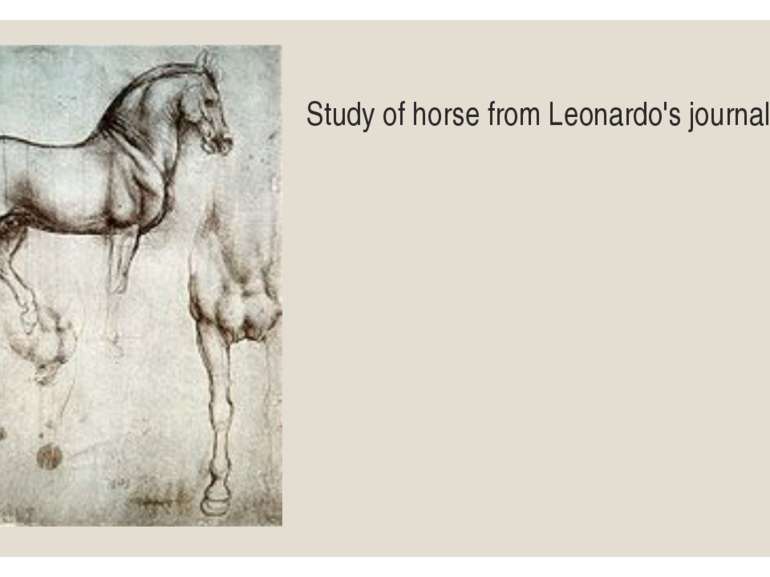 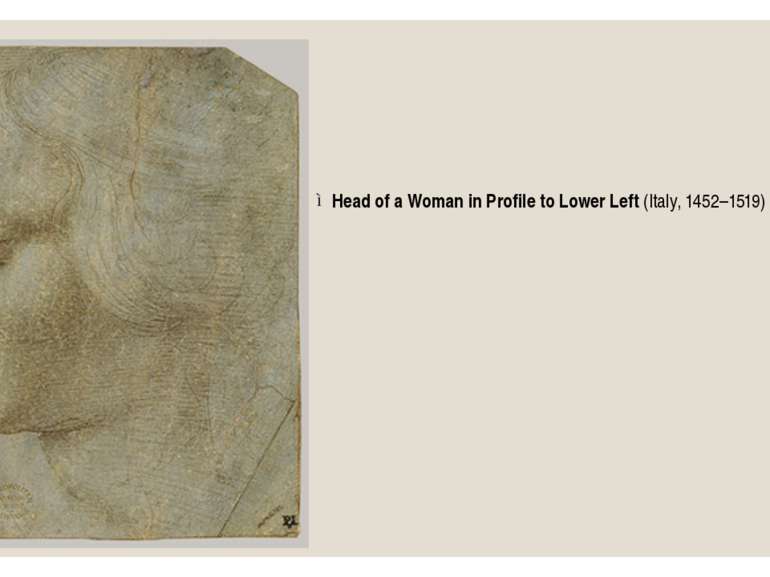 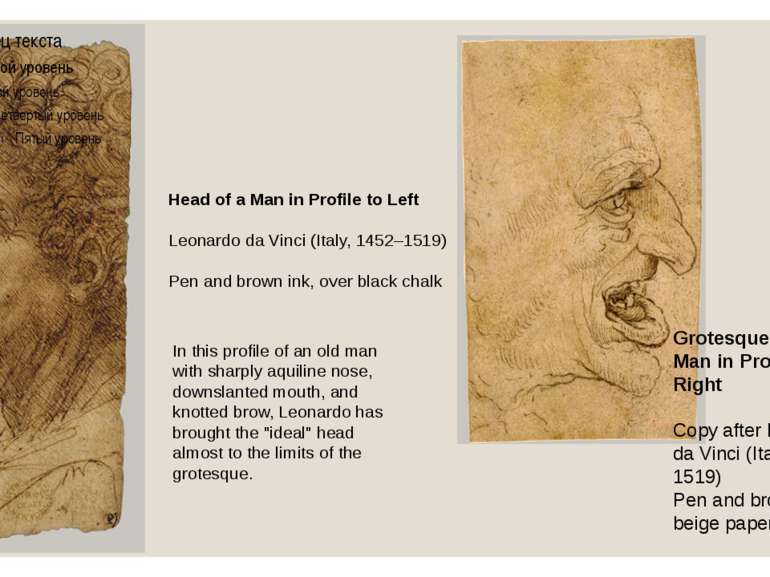 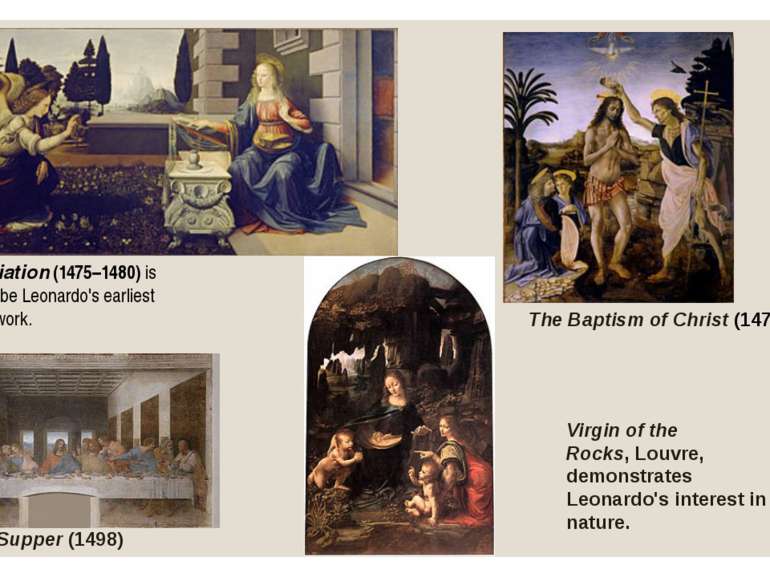 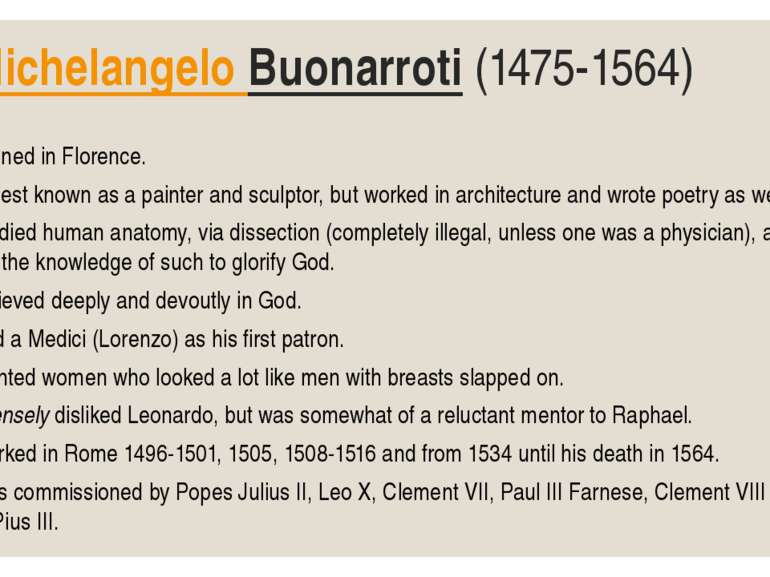 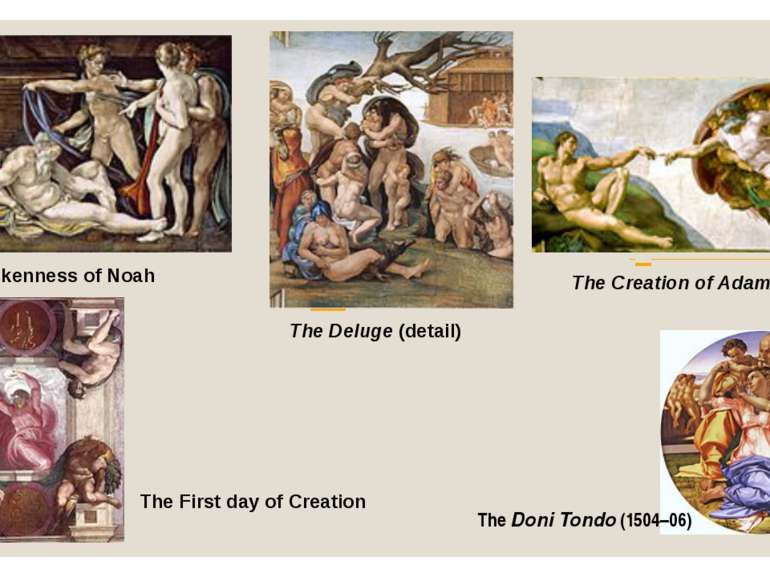 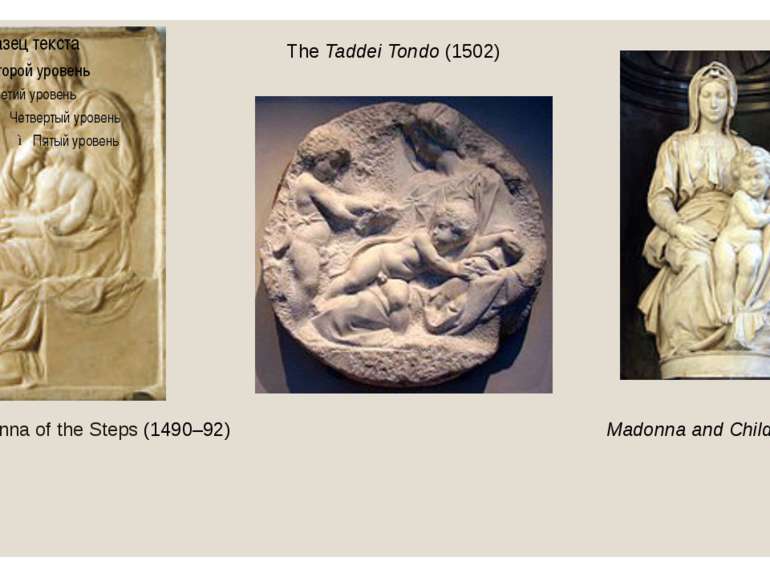 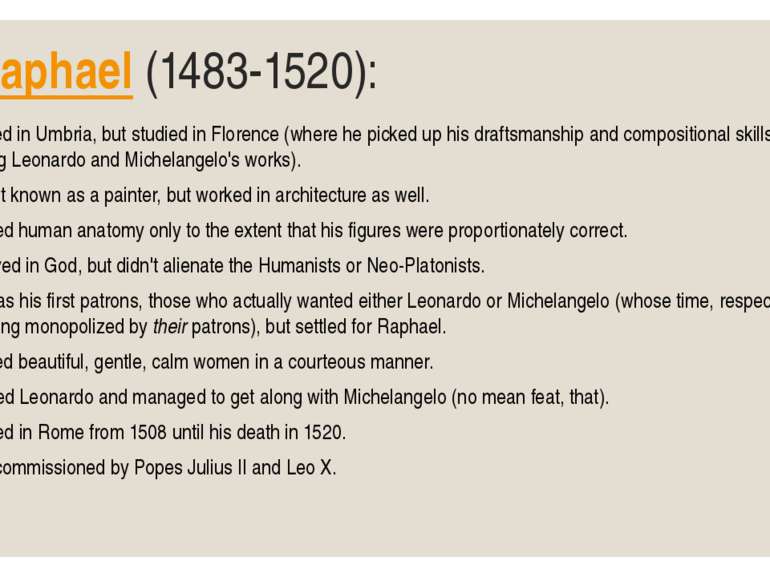 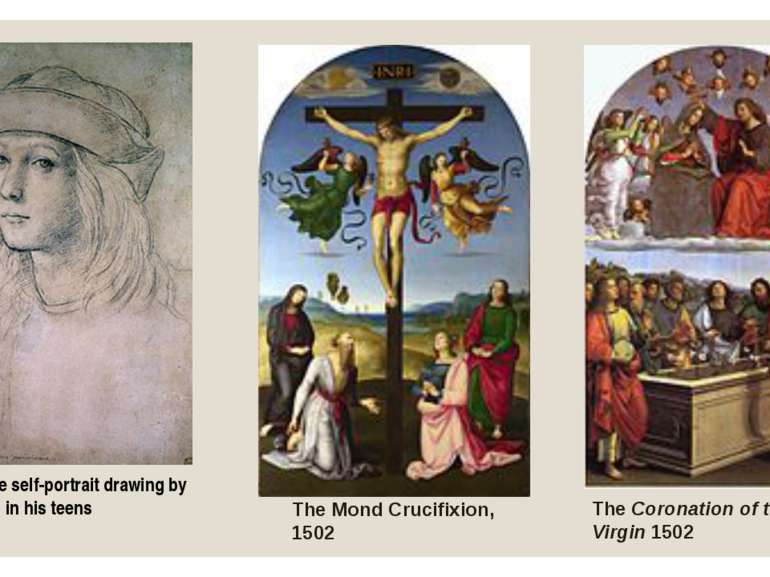 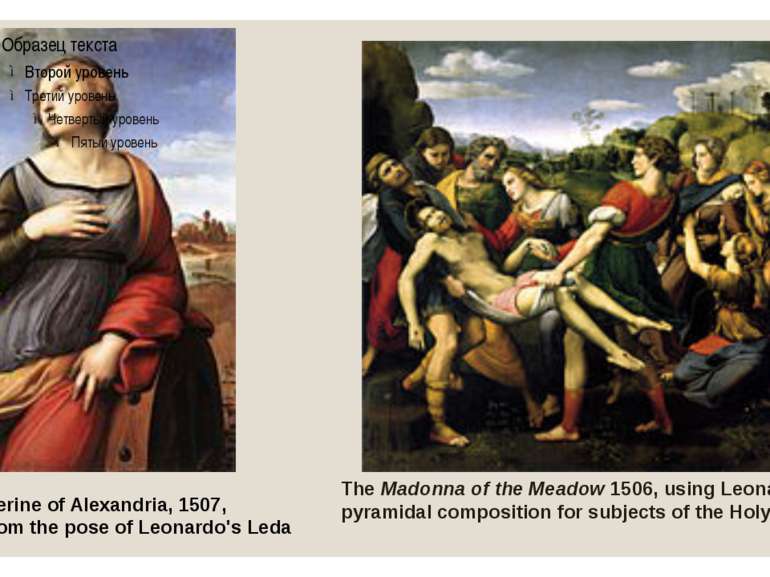 The Big Three Names of the Renaissance 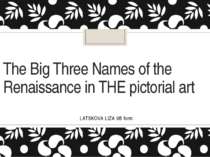 Leonardo da Vinci (1452-1519) • Trained in Florence. • Is best known as a painter, but did absolutely everything else as well. • Studied human anatomy, via dissection (completely illegal, unless one was a physician), and used the knowledge of such to glorify man. • Believed only in that which he could observe. • Had a Duke (of Milan) as his first patron. • Painted beautiful women, most of whom seemed to be enjoying delicious secrets. • Disliked Michelangelo, but was somewhat of a mentor (albeit unseen) to Raphael. • Worked in Rome from 1513 to 1516. • Was commissioned by Pope Leo X. 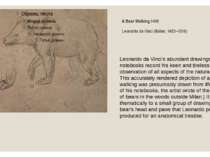 A Bear Walking,1490 Leonardo da Vinci (Italian, 1452–1519) Leonardo da Vinci's abundant drawings and notebooks record his keen and tireless observation of all aspects of the natural world. This accurately rendered depiction of a bear walking was presumably drawn from life. (In one of his notebooks, the artist wrote of the presence of bears in the woods outside Milan.) It relates thematically to a small group of drawings of a bear's head and paws that Leonardo probably produced for an anatomical treatise.

Study of horse from Leonardo's journal 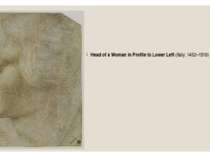 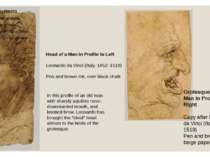 Head of a Man in Profile to Left Leonardo da Vinci (Italy, 1452–1519) Pen and brown ink, over black chalk In this profile of an old man with sharply aquiline nose, downslanted mouth, and knotted brow, Leonardo has brought the "ideal" head almost to the limits of the grotesque.  Grotesque Head: Man in Profile to Right Copy after Leonardo da Vinci (Italian, 1452–1519) Pen and brown ink, on beige paper 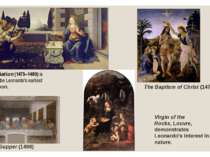 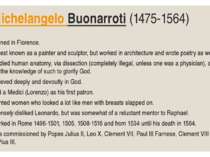 Michelangelo Buonarroti (1475-1564) • Trained in Florence. • Is best known as a painter and sculptor, but worked in architecture and wrote poetry as well. • Studied human anatomy, via dissection (completely illegal, unless one was a physician), and used the knowledge of such to glorify God. • Believed deeply and devoutly in God. • Had a Medici (Lorenzo) as his first patron. • Painted women who looked a lot like men with breasts slapped on. • Intensely disliked Leonardo, but was somewhat of a reluctant mentor to Raphael. • Worked in Rome 1496-1501, 1505, 1508-1516 and from 1534 until his death in 1564. • Was commissioned by Popes Julius II, Leo X, Clement VII, Paul III Farnese, Clement VIII and Pius III. 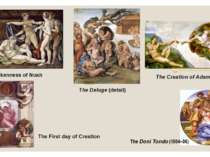 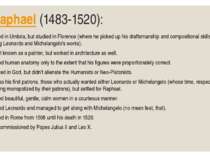 Raphael (1483-1520): • Trained in Umbria, but studied in Florence (where he picked up his draftsmanship and compositional skills by studying Leonardo and Michelangelo's works). • Is best known as a painter, but worked in architecture as well. • Studied human anatomy only to the extent that his figures were proportionately correct. • Believed in God, but didn't alienate the Humanists or Neo-Platonists. • Had, as his first patrons, those who actually wanted either Leonardo or Michelangelo (whose time, respectively, was being monopolized by their patrons), but settled for Raphael. • Painted beautiful, gentle, calm women in a courteous manner. • Idolized Leonardo and managed to get along with Michelangelo (no mean feat, that). • Worked in Rome from 1508 until his death in 1520. • Was commissioned by Popes Julius II and Leo X. 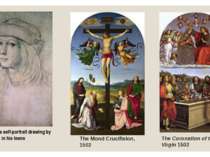 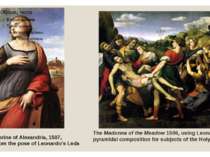 Saint Catherine of Alexandria, 1507, borrows from the pose of Leonardo's Leda The Madonna of the Meadow 1506, using Leonardo's pyramidal composition for subjects of the Holy Family. 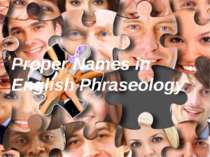 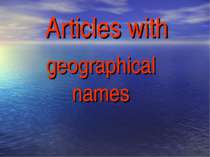