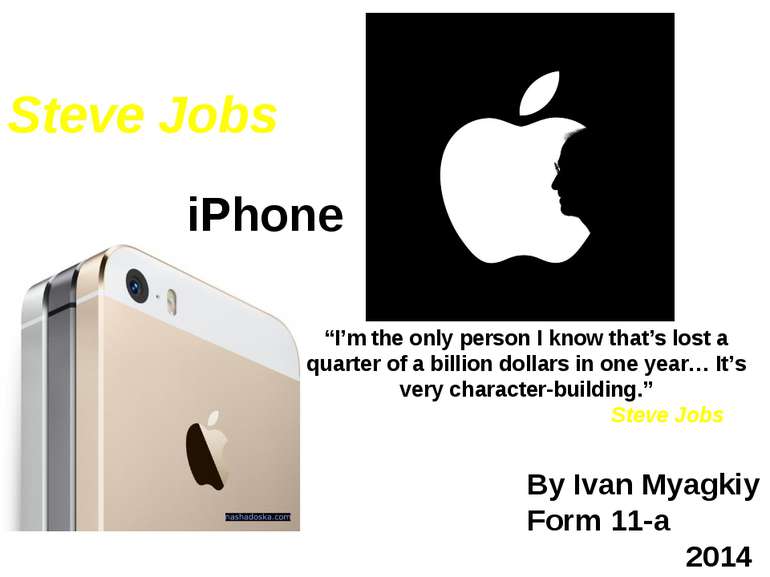 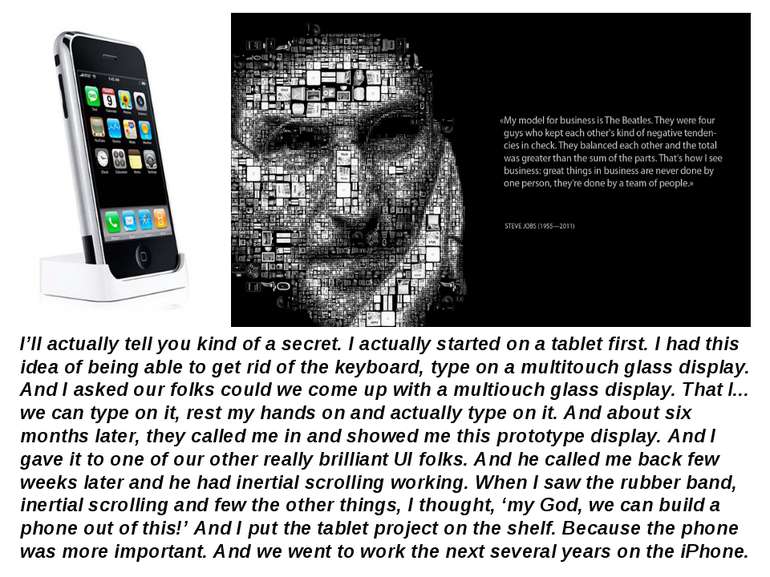 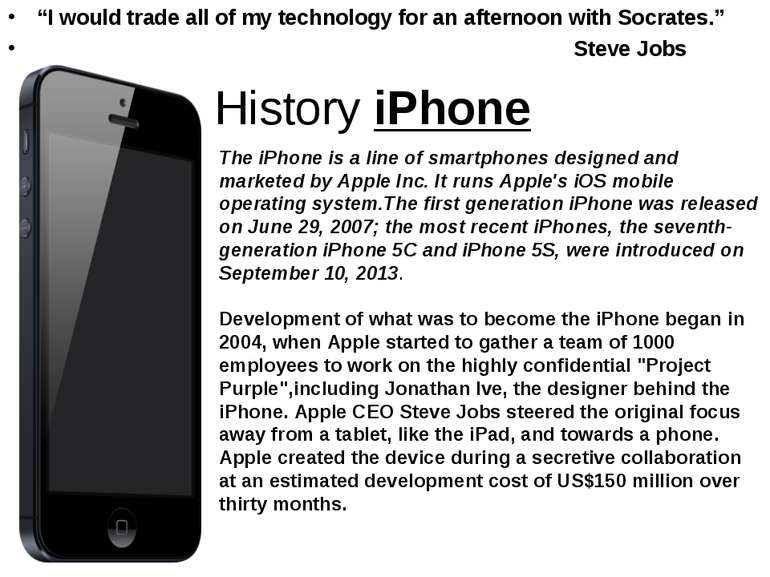 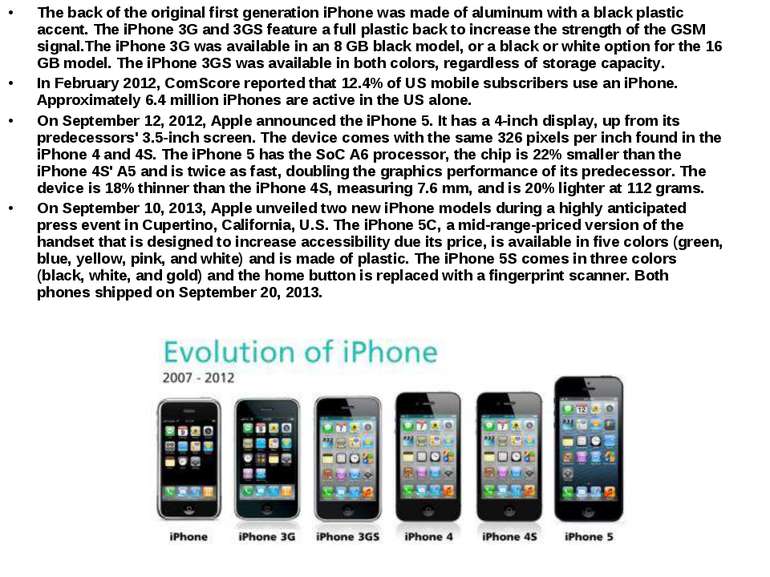 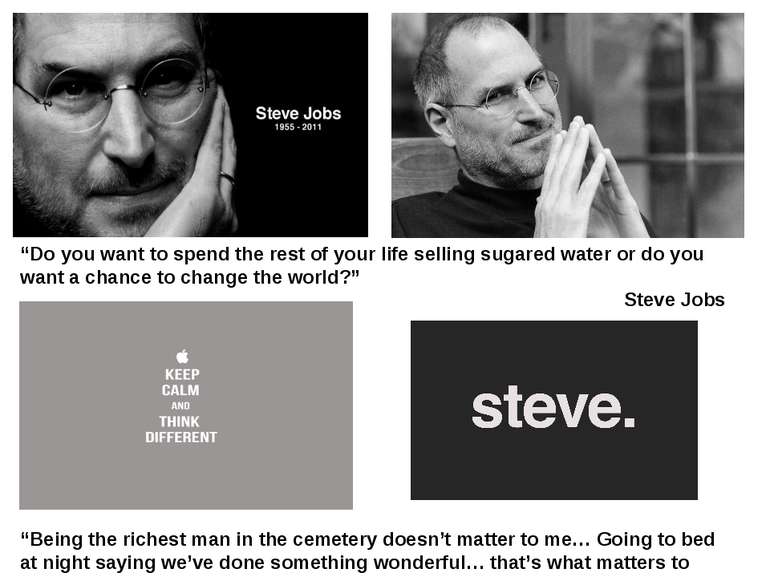 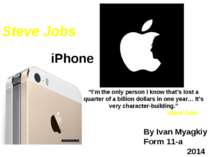 “I’m the only person I know that’s lost a quarter of a billion dollars in one year… It’s very character-building.” Steve Jobs Steve Jobs iPhone By Ivan Myagkiy Form 11-a 2014 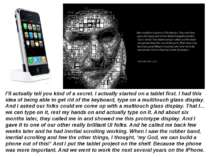 I’ll actually tell you kind of a secret. I actually started on a tablet first. I had this idea of being able to get rid of the keyboard, type on a multitouch glass display. And I asked our folks could we come up with a multiouch glass display. That I... we can type on it, rest my hands on and actually type on it. And about six months later, they called me in and showed me this prototype display. And I gave it to one of our other really brilliant UI folks. And he called me back few weeks later and he had inertial scrolling working. When I saw the rubber band, inertial scrolling and few the other things, I thought, ‘my God, we can build a phone out of this!’ And I put the tablet project on the shelf. Because the phone was more important. And we went to work the next several years on the iPhone. 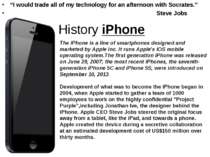 History iPhone “I would trade all of my technology for an afternoon with Socrates.” Steve Jobs The iPhone is a line of smartphones designed and marketed by Apple Inc. It runs Apple's iOS mobile operating system.The first generation iPhone was released on June 29, 2007; the most recent iPhones, the seventh-generation iPhone 5C and iPhone 5S, were introduced on September 10, 2013. Development of what was to become the iPhone began in 2004, when Apple started to gather a team of 1000 employees to work on the highly confidential "Project Purple",including Jonathan Ive, the designer behind the iPhone. Apple CEO Steve Jobs steered the original focus away from a tablet, like the iPad, and towards a phone. Apple created the device during a secretive collaboration at an estimated development cost of US$150 million over thirty months. 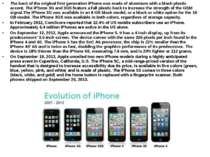 The back of the original first generation iPhone was made of aluminum with a black plastic accent. The iPhone 3G and 3GS feature a full plastic back to increase the strength of the GSM signal.The iPhone 3G was available in an 8 GB black model, or a black or white option for the 16 GB model. The iPhone 3GS was available in both colors, regardless of storage capacity. In February 2012, ComScore reported that 12.4% of US mobile subscribers use an iPhone. Approximately 6.4 million iPhones are active in the US alone. On September 12, 2012, Apple announced the iPhone 5. It has a 4-inch display, up from its predecessors' 3.5-inch screen. The device comes with the same 326 pixels per inch found in the iPhone 4 and 4S. The iPhone 5 has the SoC A6 processor, the chip is 22% smaller than the iPhone 4S' A5 and is twice as fast, doubling the graphics performance of its predecessor. The device is 18% thinner than the iPhone 4S, measuring 7.6 mm, and is 20% lighter at 112 grams. On September 10, 2013, Apple unveiled two new iPhone models during a highly anticipated press event in Cupertino, California, U.S. The iPhone 5C, a mid-range-priced version of the handset that is designed to increase accessibility due its price, is available in five colors (green, blue, yellow, pink, and white) and is made of plastic. The iPhone 5S comes in three colors (black, white, and gold) and the home button is replaced with a fingerprint scanner. Both phones shipped on September 20, 2013. 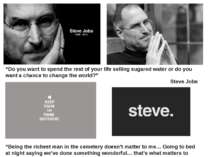 “Do you want to spend the rest of your life selling sugared water or do you want a chance to change the world?” Steve Jobs “Being the richest man in the cemetery doesn’t matter to me… Going to bed at night saying we’ve done something wonderful… that’s what matters to me.” 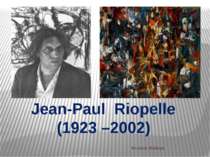 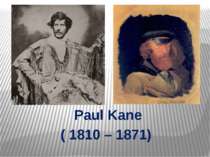 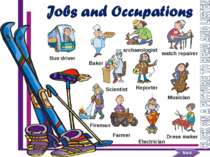 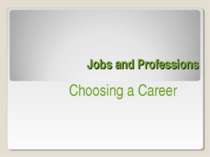 Jobs and Professions. Choosing a career, doing a manner 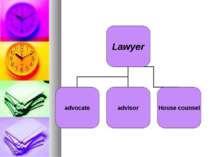 Jobs and Professions. Choosing a car 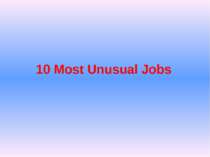 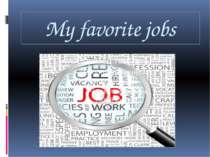 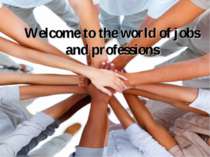 "Welcome to the world of jobs and professions" 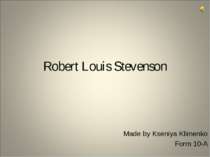 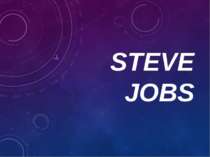