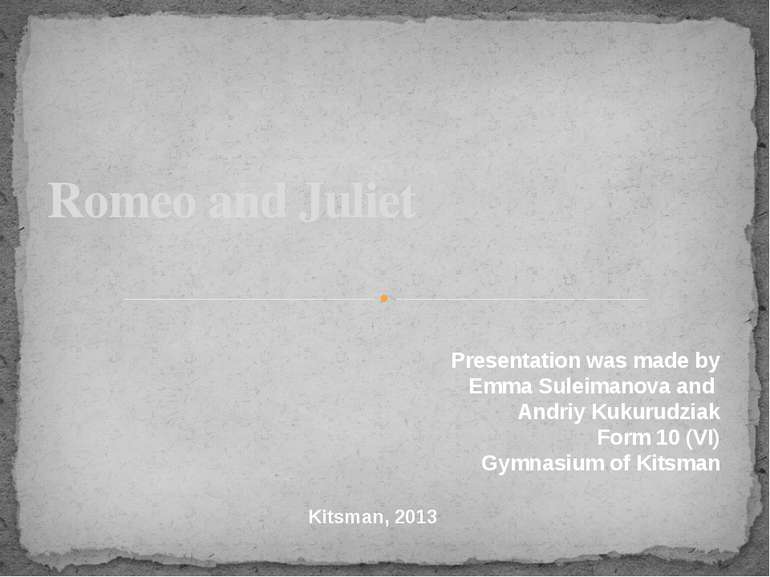 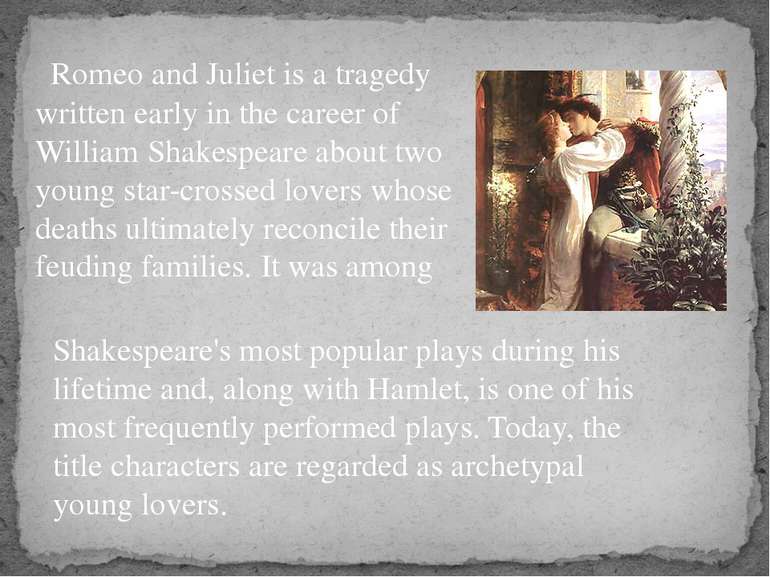 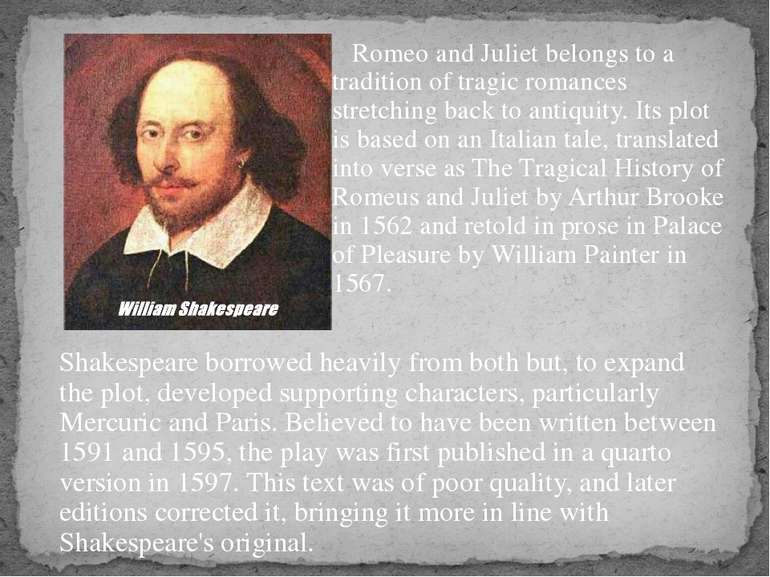 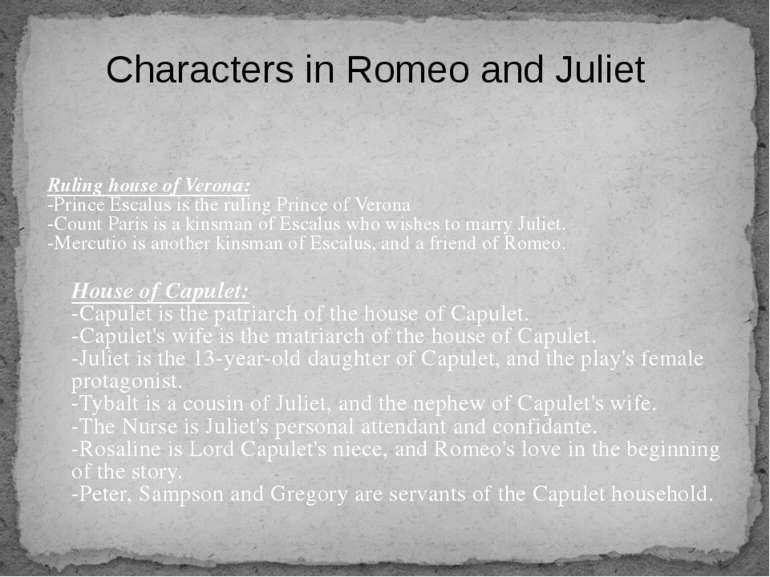 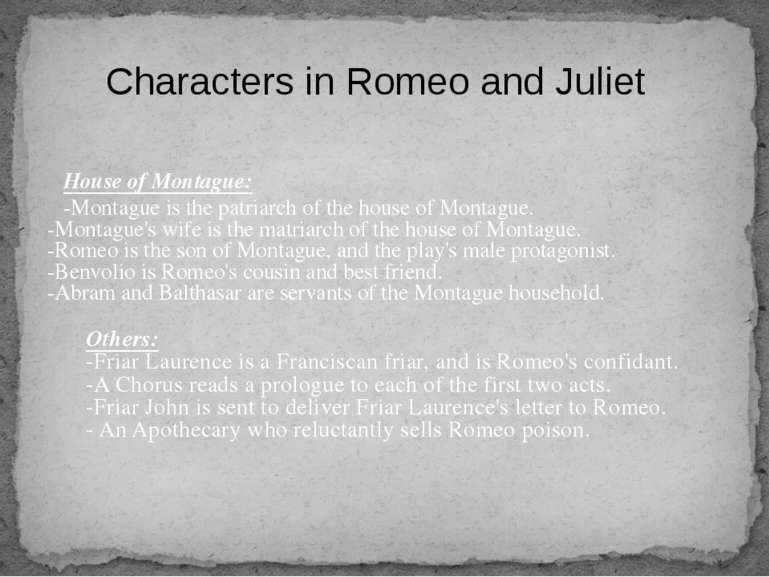 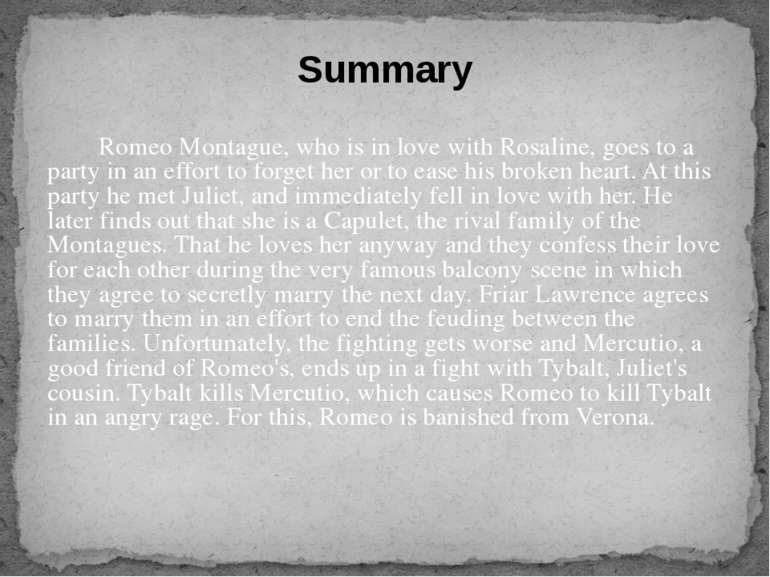 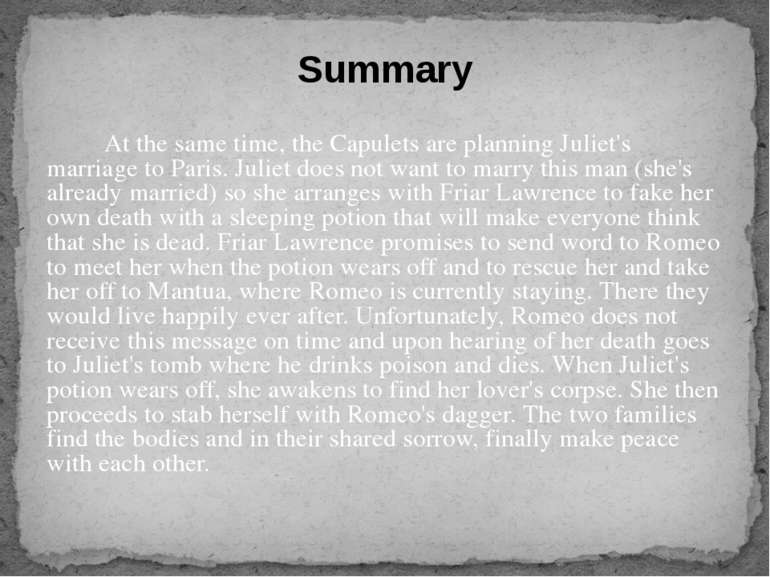 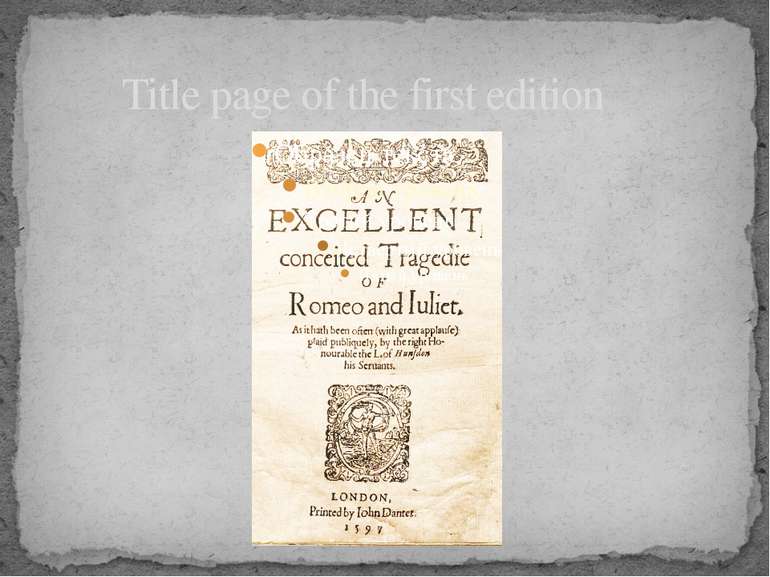 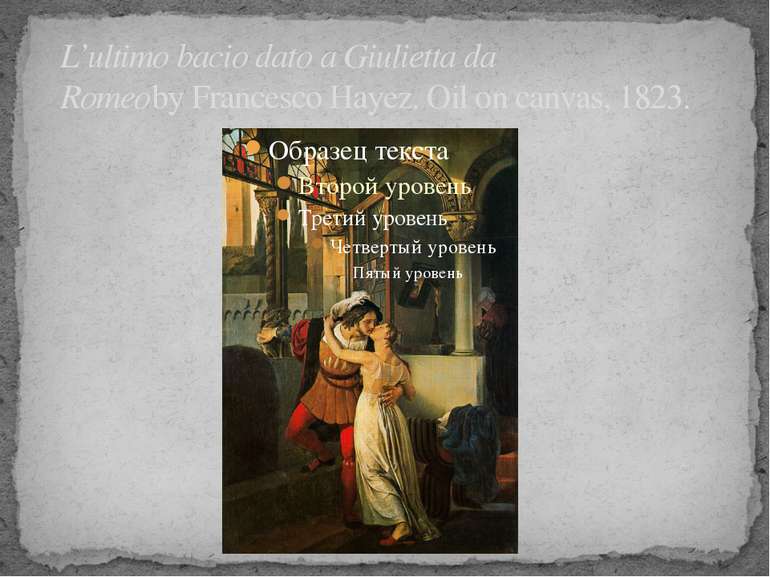 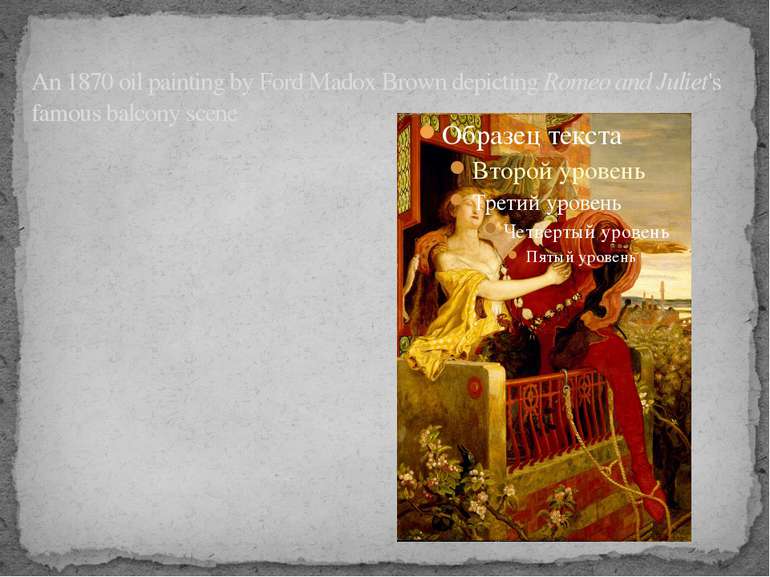 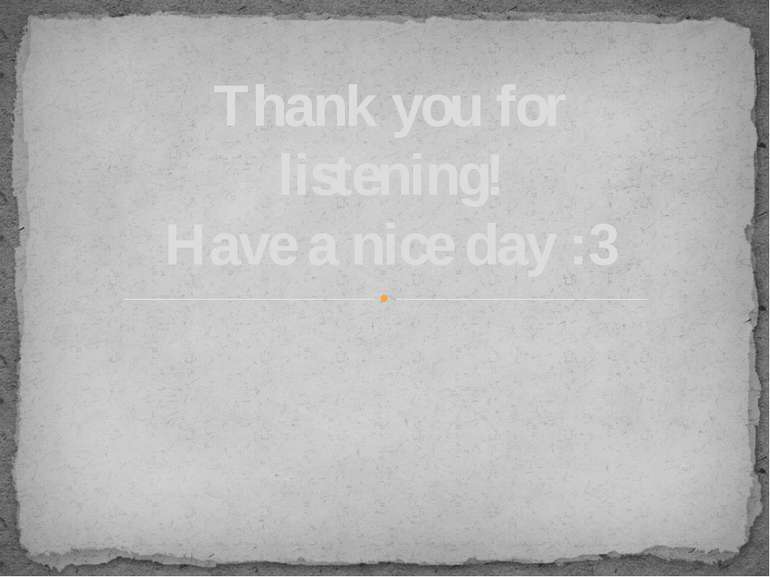 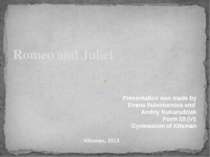 Romeo and Juliet Presentation was made by Emma Suleimanova and Andriy Kukurudziak Form 10 (VI) Gymnasium of Kitsman Kitsman, 2013 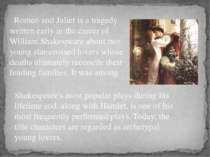 Romeo and Juliet is a tragedy written early in the career of William Shakespeare about two young star-crossed lovers whose deaths ultimately reconcile their feuding families. It was among Shakespeare's most popular plays during his lifetime and, along with Hamlet, is one of his most frequently performed plays. Today, the title characters are regarded as archetypal young lovers. 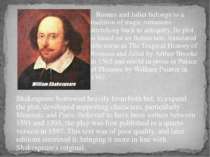 Romeo and Juliet belongs to a tradition of tragic romances stretching back to antiquity. Its plot is based on an Italian tale, translated into verse as The Tragical History of Romeus and Juliet by Arthur Brooke in 1562 and retold in prose in Palace of Pleasure by William Painter in 1567. Shakespeare borrowed heavily from both but, to expand the plot, developed supporting characters, particularly Mercuric and Paris. Believed to have been written between 1591 and 1595, the play was first published in a quarto version in 1597. This text was of poor quality, and later editions corrected it, bringing it more in line with Shakespeare's original. 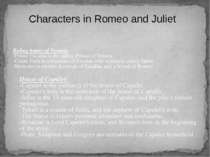 Ruling house of Verona: -Prince Escalus is the ruling Prince of Verona -Count Paris is a kinsman of Escalus who wishes to marry Juliet. -Mercutio is another kinsman of Escalus, and a friend of Romeo. Characters in Romeo and Juliet House of Capulet: -Capulet is the patriarch of the house of Capulet. -Capulet's wife is the matriarch of the house of Capulet. -Juliet is the 13-year-old daughter of Capulet, and the play's female protagonist. -Tybalt is a cousin of Juliet, and the nephew of Capulet's wife. -The Nurse is Juliet's personal attendant and confidante. -Rosaline is Lord Capulet's niece, and Romeo's love in the beginning of the story. -Peter, Sampson and Gregory are servants of the Capulet household. 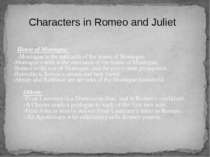 House of Montague: -Montague is the patriarch of the house of Montague. -Montague's wife is the matriarch of the house of Montague. -Romeo is the son of Montague, and the play's male protagonist. -Benvolio is Romeo's cousin and best friend. -Abram and Balthasar are servants of the Montague household. Characters in Romeo and Juliet Others: -Friar Laurence is a Franciscan friar, and is Romeo's confidant. -A Chorus reads a prologue to each of the first two acts. -Friar John is sent to deliver Friar Laurence's letter to Romeo. - An Apothecary who reluctantly sells Romeo poison. 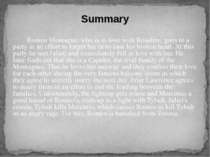 Romeo Montague, who is in love with Rosaline, goes to a party in an effort to forget her or to ease his broken heart. At this party he met Juliet, and immediately fell in love with her. He later finds out that she is a Capulet, the rival family of the Montagues. That he loves her anyway and they confess their love for each other during the very famous balcony scene in which they agree to secretly marry the next day. Friar Lawrence agrees to marry them in an effort to end the feuding between the families. Unfortunately, the fighting gets worse and Mercutio, a good friend of Romeo's, ends up in a fight with Tybalt, Juliet's cousin. Tybalt kills Mercutio, which causes Romeo to kill Tybalt in an angry rage. For this, Romeo is banished from Verona.  Summary 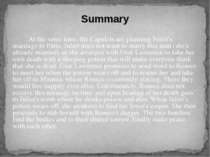 At the same time, the Capulets are planning Juliet's marriage to Paris. Juliet does not want to marry this man (she's already married) so she arranges with Friar Lawrence to fake her own death with a sleeping potion that will make everyone think that she is dead. Friar Lawrence promises to send word to Romeo to meet her when the potion wears off and to rescue her and take her off to Mantua, where Romeo is currently staying. There they would live happily ever after. Unfortunately, Romeo does not receive this message on time and upon hearing of her death goes to Juliet's tomb where he drinks poison and dies. When Juliet's potion wears off, she awakens to find her lover's corpse. She then proceeds to stab herself with Romeo's dagger. The two families find the bodies and in their shared sorrow, finally make peace with each other. Summary 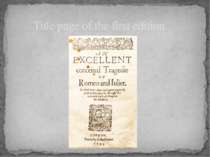 Title page of the first edition 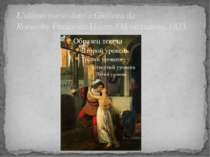 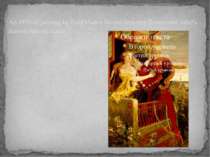 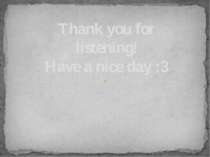 Thank you for listening! Have a nice day :3