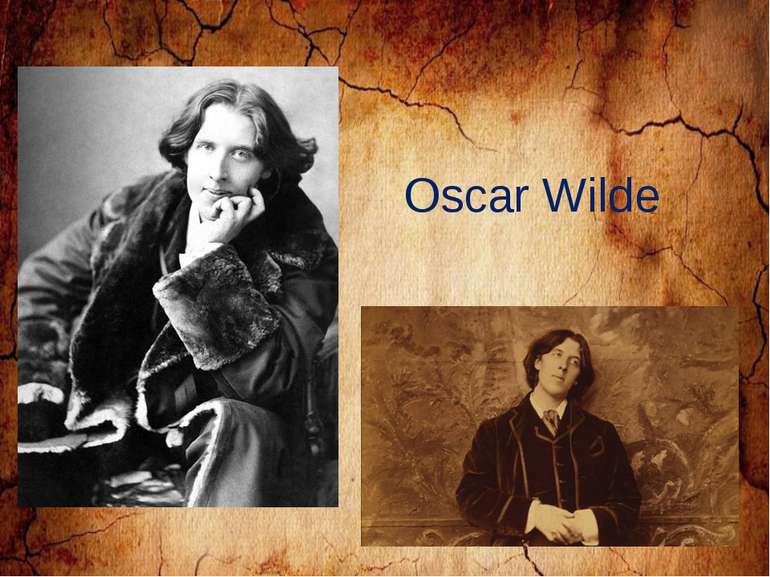 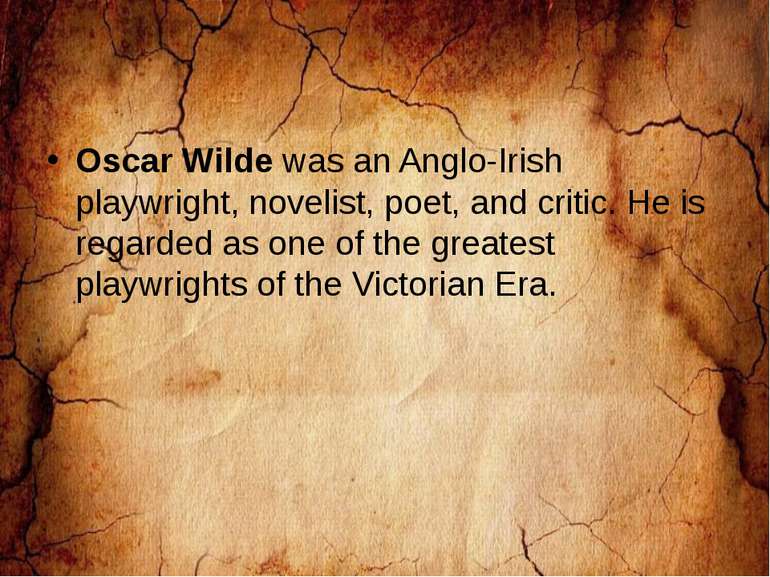 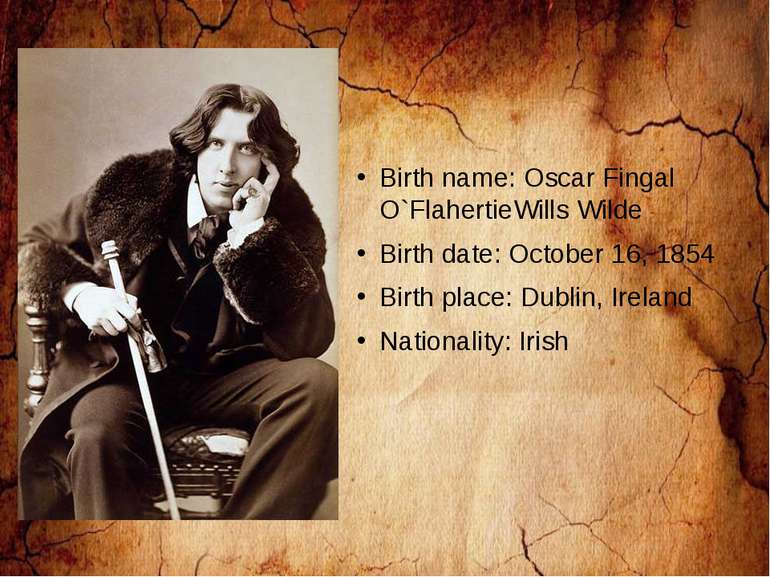 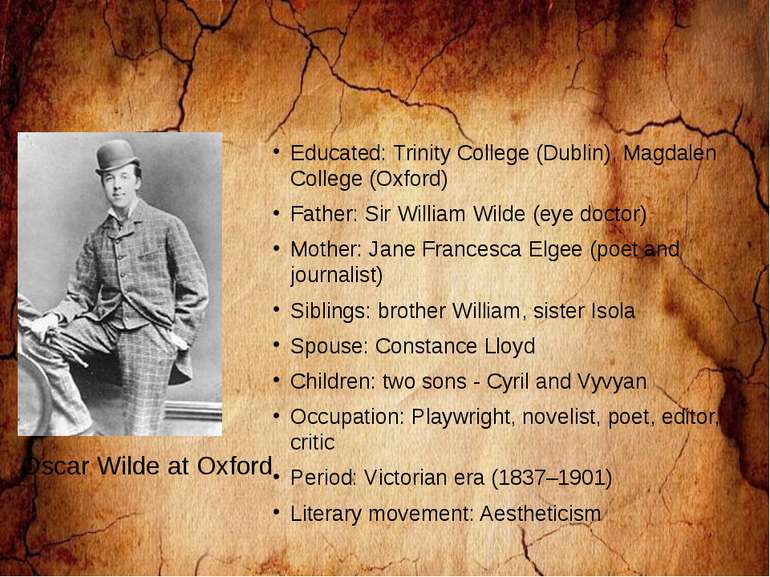 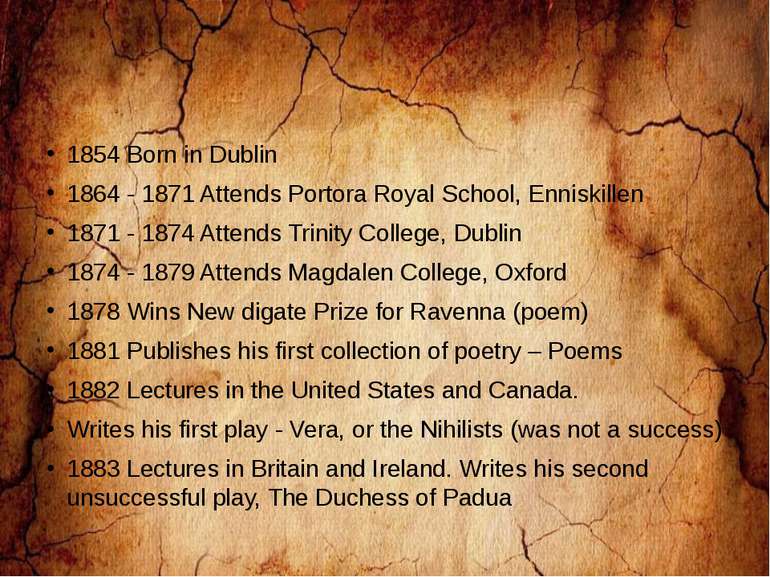 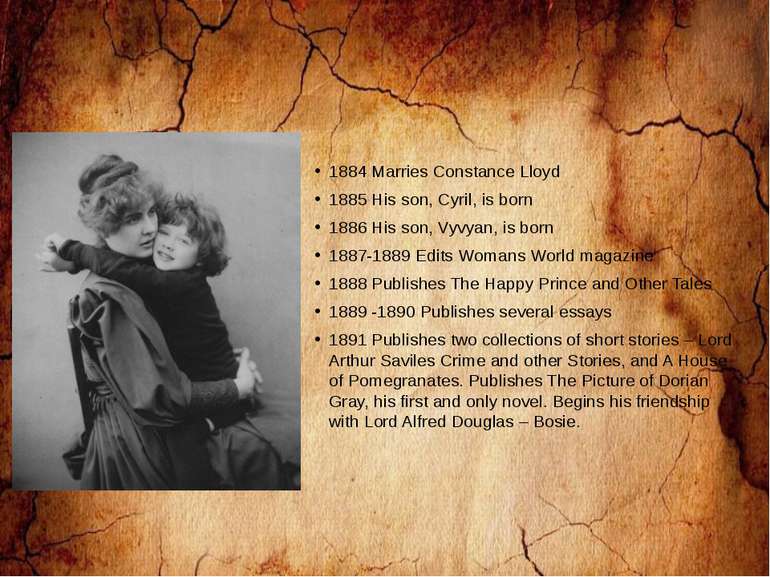 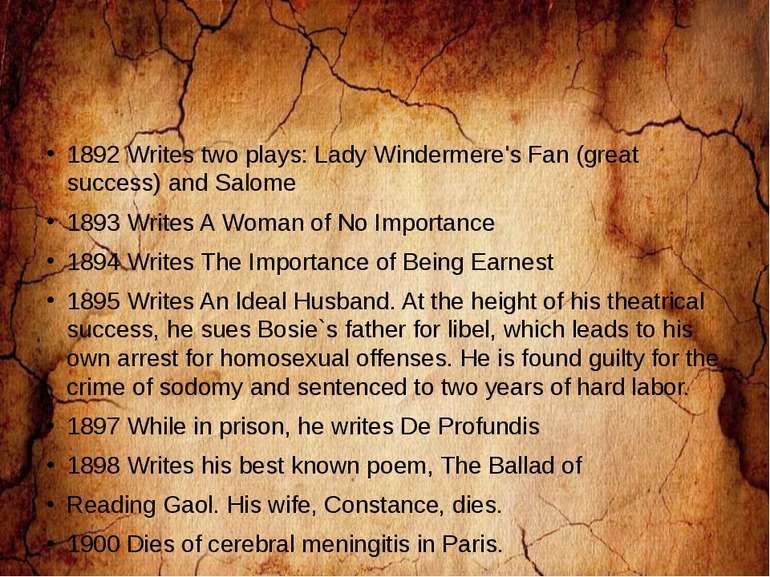 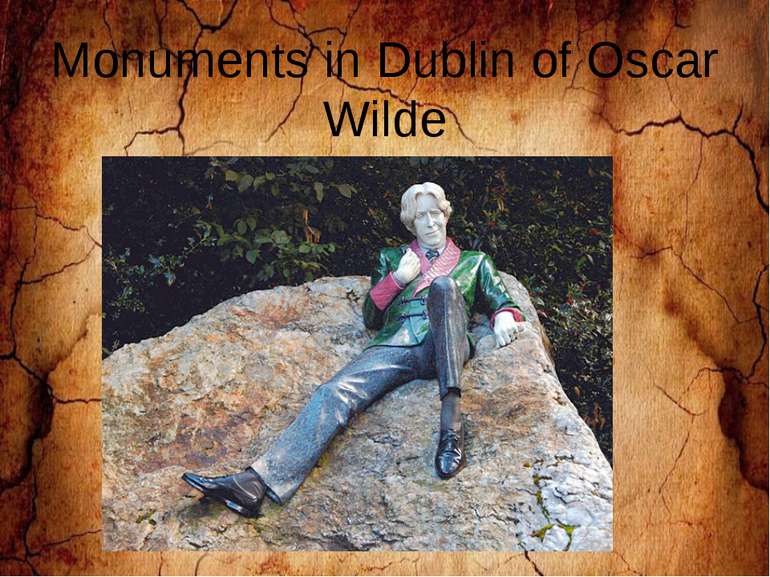 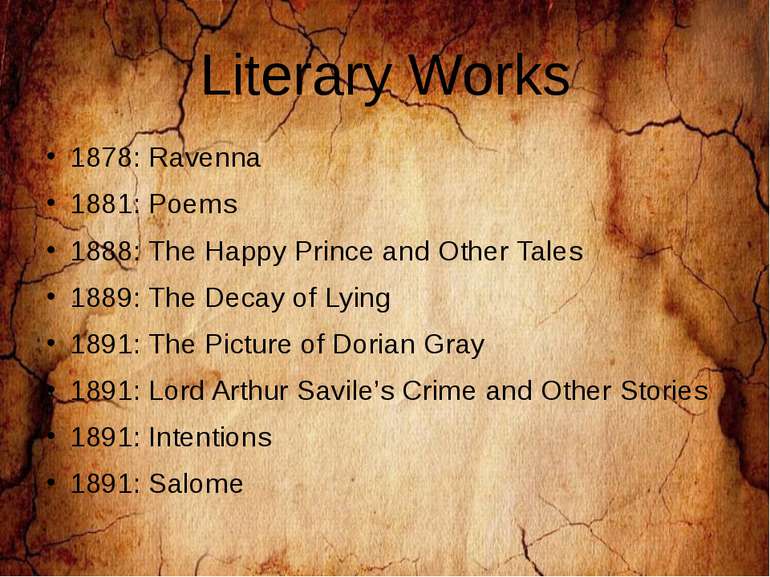 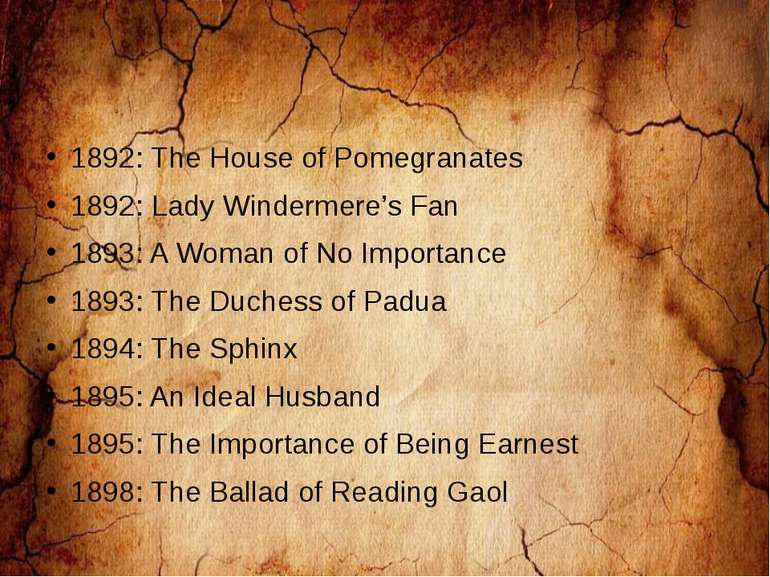 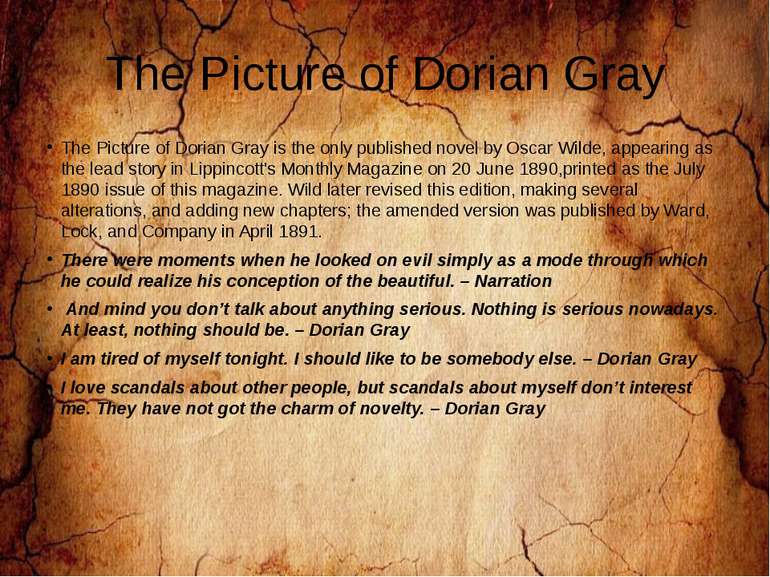 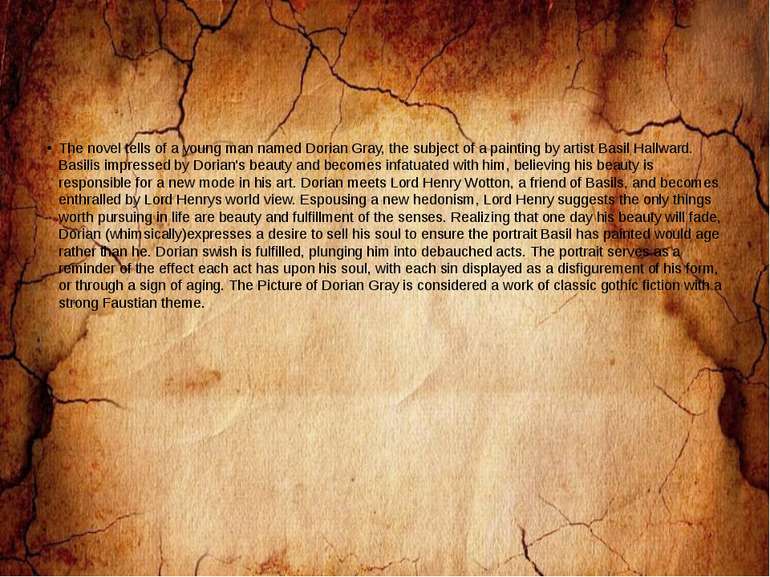 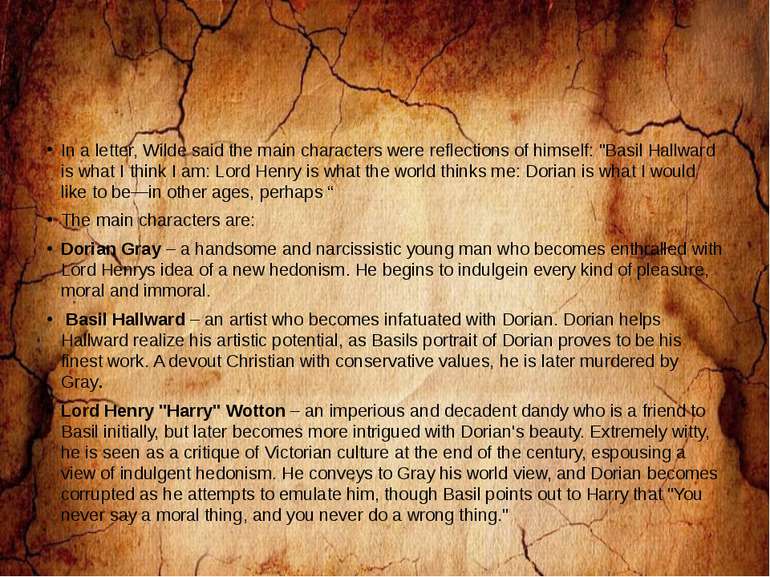 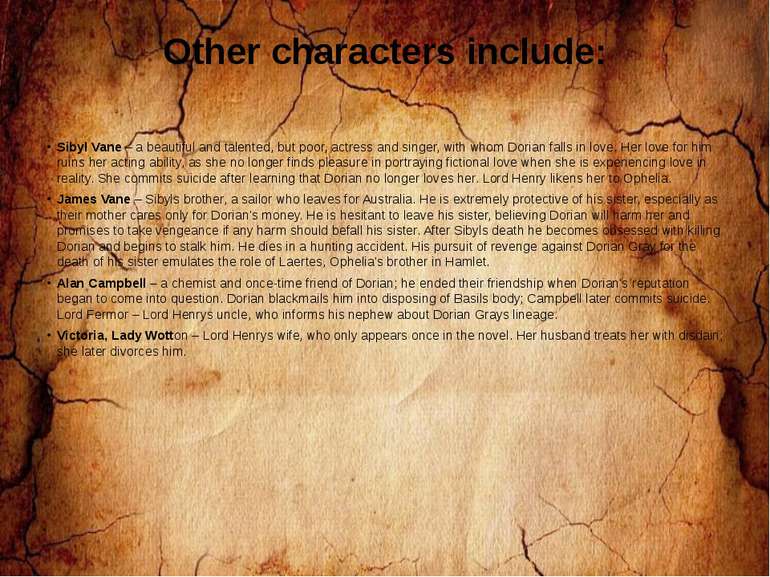 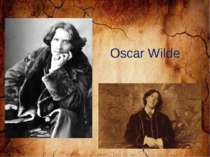 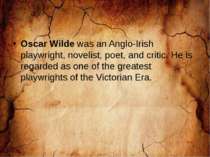 Oscar Wilde was an Anglo-Irish playwright, novelist, poet, and critic. He is regarded as one of the greatest playwrights of the Victorian Era. 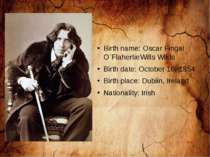 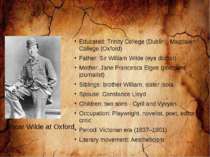 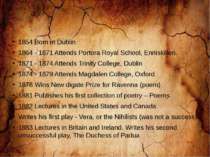 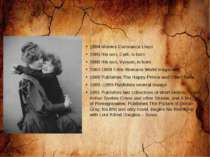 1884 Marries Constance Lloyd 1885 His son, Cyril, is born 1886 His son, Vyvyan, is born 1887-1889 Edits Womans World magazine 1888 Publishes The Happy Prince and Other Tales 1889 -1890 Publishes several essays 1891 Publishes two collections of short stories – Lord Arthur Saviles Crime and other Stories, and A House of Pomegranates. Publishes The Picture of Dorian Gray, his first and only novel. Begins his friendship with Lord Alfred Douglas – Bosie. 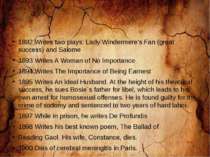 1892 Writes two plays: Lady Windermere's Fan (great success) and Salome 1893 Writes A Woman of No Importance 1894 Writes The Importance of Being Earnest 1895 Writes An ldeal Husband. At the height of his theatrical success, he sues Bosie`s father for libel, which leads to his own arrest for homosexual offenses. He is found guilty for the crime of sodomy and sentenced to two years of hard labor. 1897 While in prison, he writes De Profundis 1898 Writes his best known poem, The Ballad of Reading Gaol. His wife, Constance, dies. 1900 Dies of cerebral meningitis in Paris. 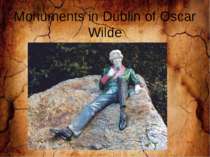 Monuments in Dublin of Oscar Wilde 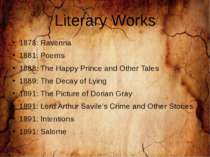 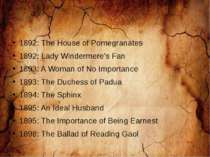 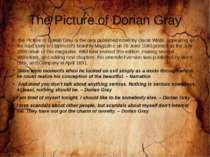 The Picture of Dorian Gray The Picture of Dorian Gray is the only published novel by Oscar Wilde, appearing as the lead story in Lippincott's Monthly Magazine on 20 June 1890,printed as the July 1890 issue of this magazine. Wild later revised this edition, making several alterations, and adding new chapters; the amended version was published by Ward, Lock, and Company in April 1891. There were moments when he looked on evil simply as a mode through which he could realize his conception of the beautiful. – Narration And mind you don’t talk about anything serious. Nothing is serious nowadays. At least, nothing should be. – Dorian Gray I am tired of myself tonight. I should like to be somebody else. – Dorian Gray I love scandals about other people, but scandals about myself don’t interest me. They have not got the charm of novelty. – Dorian Gray 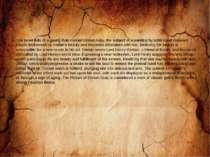 The novel tells of a young man named Dorian Gray, the subject of a painting by artist Basil Hallward. Basilis impressed by Dorian's beauty and becomes infatuated with him, believing his beauty is responsible for a new mode in his art. Dorian meets Lord Henry Wotton, a friend of Basils, and becomes enthralled by Lord Henrys world view. Espousing a new hedonism, Lord Henry suggests the only things worth pursuing in life are beauty and fulfillment of the senses. Realizing that one day his beauty will fade, Dorian (whimsically)expresses a desire to sell his soul to ensure the portrait Basil has painted would age rather than he. Dorian swish is fulfilled, plunging him into debauched acts. The portrait serves as a reminder of the effect each act has upon his soul, with each sin displayed as a disfigurement of his form, or through a sign of aging. The Picture of Dorian Gray is considered a work of classic gothic fiction with a strong Faustian theme. 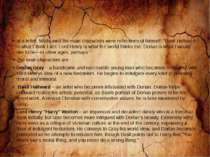 In a letter, Wilde said the main characters were reflections of himself: "Basil Hallward is what I think I am: Lord Henry is what the world thinks me: Dorian is what I would like to be—in other ages, perhaps “ The main characters are: Dorian Gray – a handsome and narcissistic young man who becomes enthralled with Lord Henrys idea of a new hedonism. He begins to indulgein every kind of pleasure, moral and immoral. Basil Hallward – an artist who becomes infatuated with Dorian. Dorian helps Hallward realize his artistic potential, as Basils portrait of Dorian proves to be his finest work. A devout Christian with conservative values, he is later murdered by Gray. Lord Henry "Harry" Wotton – an imperious and decadent dandy who is a friend to Basil initially, but later becomes more intrigued with Dorian's beauty. Extremely witty, he is seen as a critique of Victorian culture at the end of the century, espousing a view of indulgent hedonism. He conveys to Gray his world view, and Dorian becomes corrupted as he attempts to emulate him, though Basil points out to Harry that "You never say a moral thing, and you never do a wrong thing." 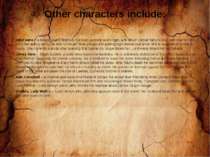 Other characters include: Sibyl Vane – a beautiful and talented, but poor, actress and singer, with whom Dorian falls in love. Her love for him ruins her acting ability, as she no longer finds pleasure in portraying fictional love when she is experiencing love in reality. She commits suicide after learning that Dorian no longer loves her. Lord Henry likens her to Ophelia. James Vane – Sibyls brother, a sailor who leaves for Australia. He is extremely protective of his sister, especially as their mother cares only for Dorian's money. He is hesitant to leave his sister, believing Dorian will harm her and promises to take vengeance if any harm should befall his sister. After Sibyls death he becomes obsessed with killing Dorian and begins to stalk him. He dies in a hunting accident. His pursuit of revenge against Dorian Gray for the death of his sister emulates the role of Laertes, Ophelia's brother in Hamlet. Alan Campbell – a chemist and once-time friend of Dorian; he ended their friendship when Dorian's reputation began to come into question. Dorian blackmails him into disposing of Basils body; Campbell later commits suicide. Lord Fermor – Lord Henrys uncle, who informs his nephew about Dorian Grays lineage. Victoria, Lady Wotton – Lord Henrys wife, who only appears once in the novel. Her husband treats her with disdain; she later divorces him.