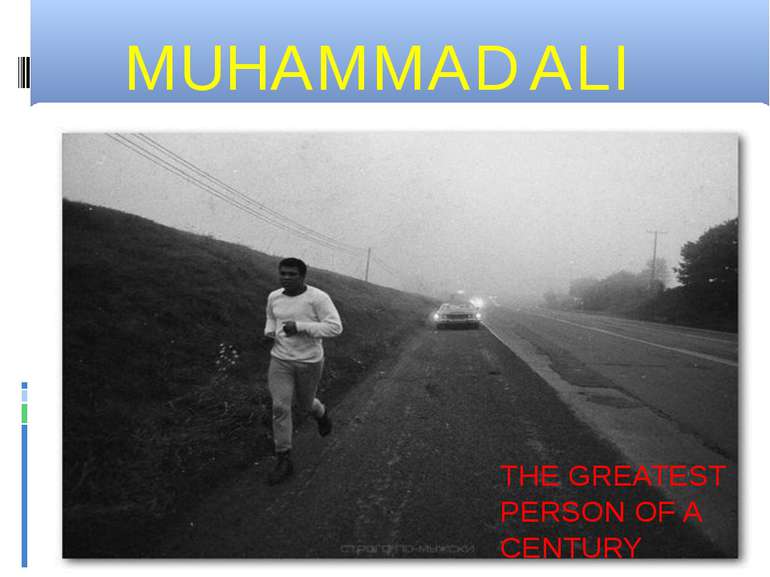 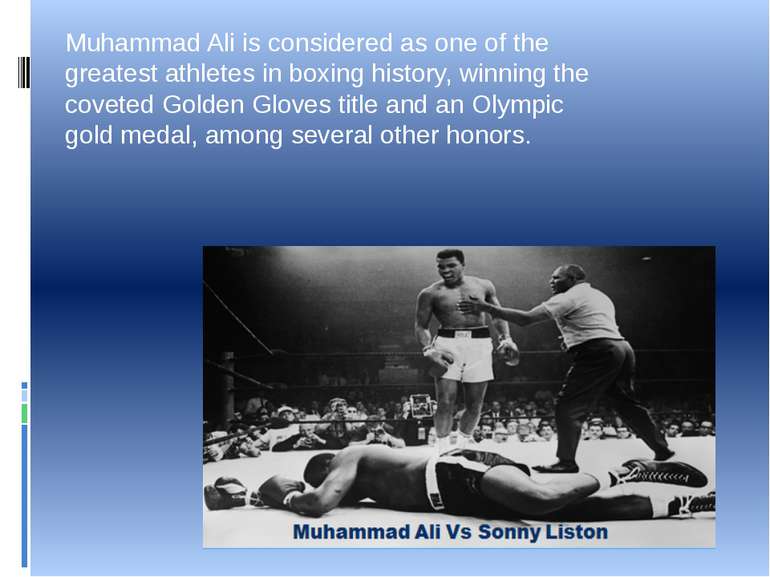 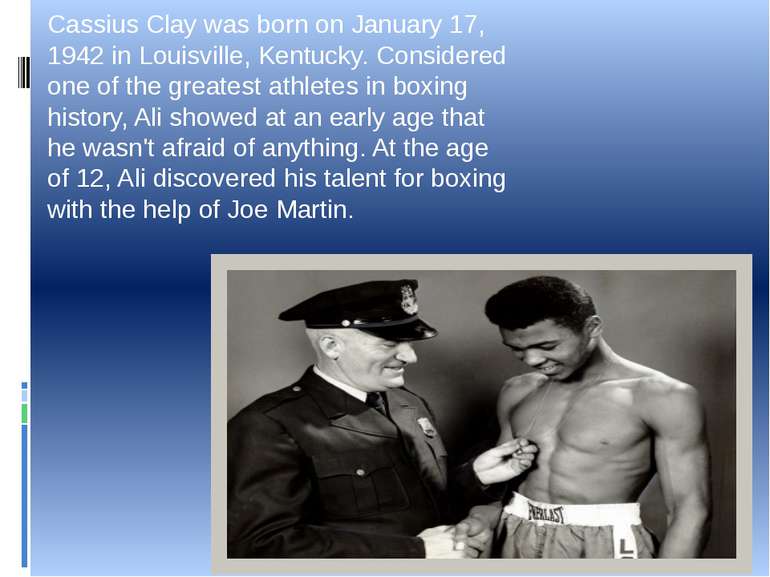 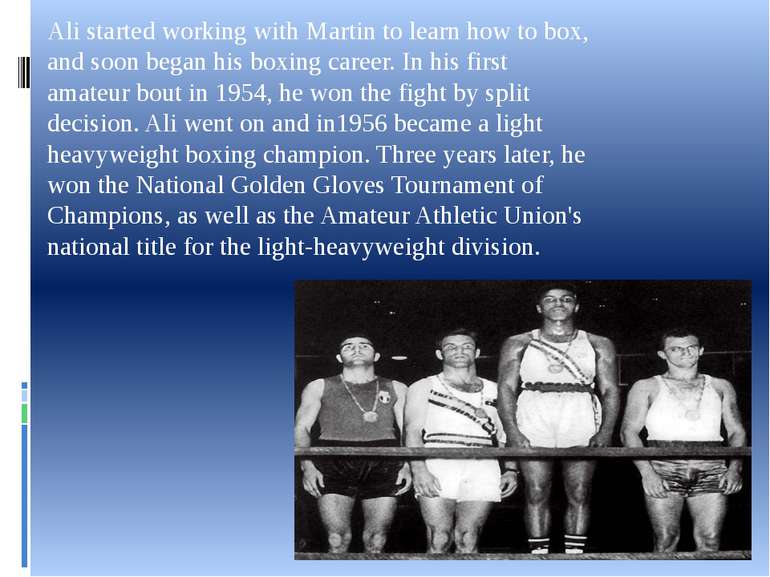 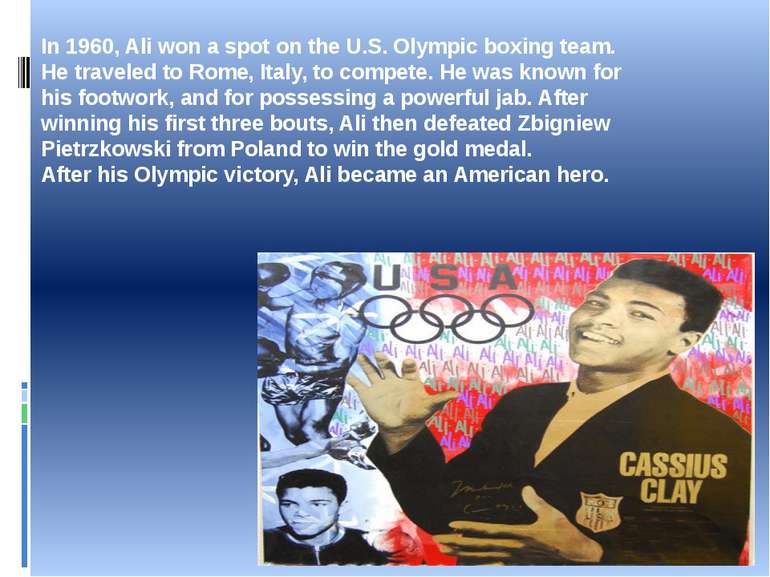 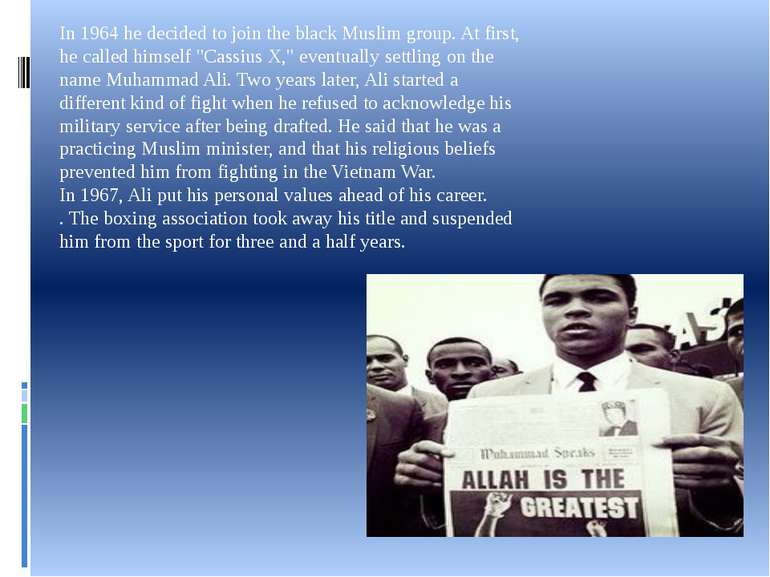 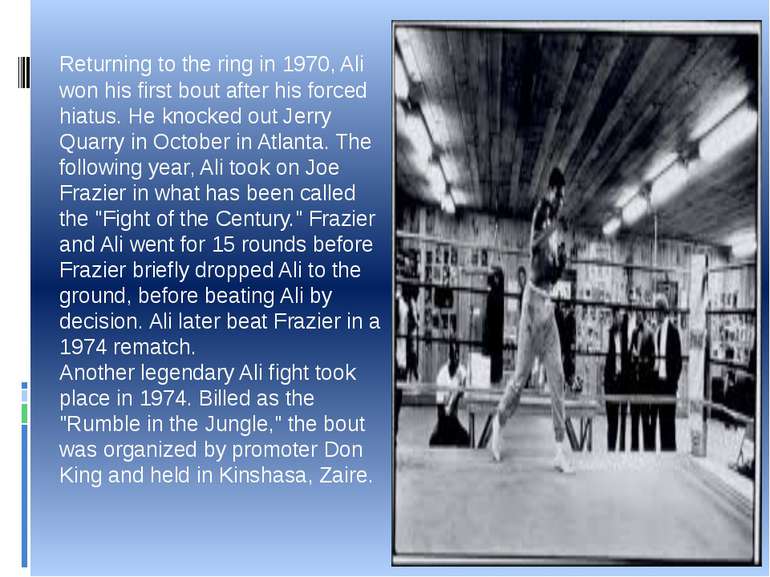 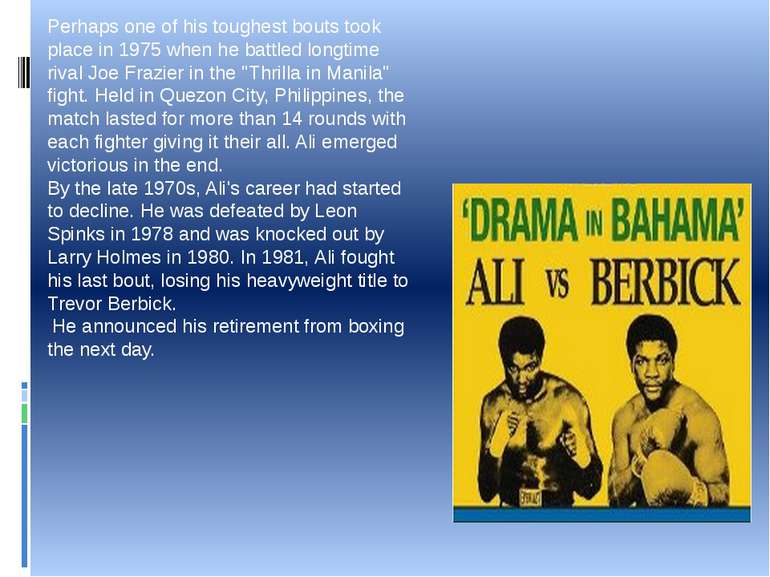 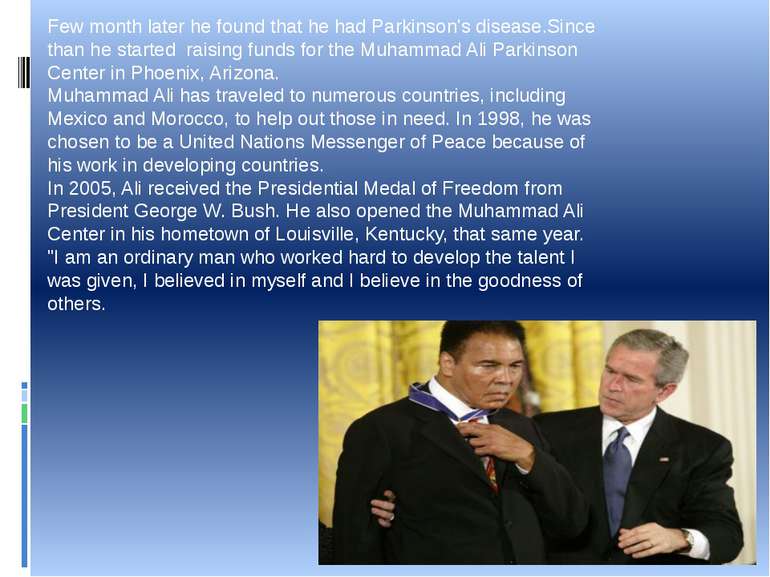 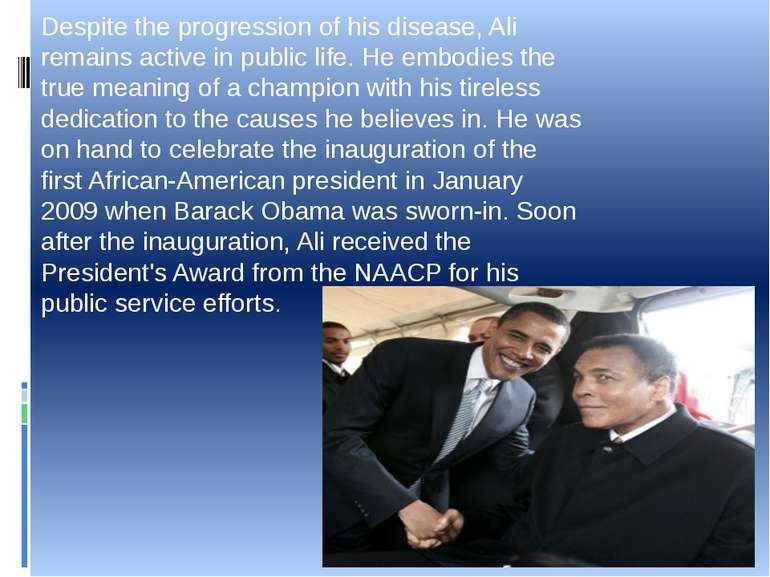 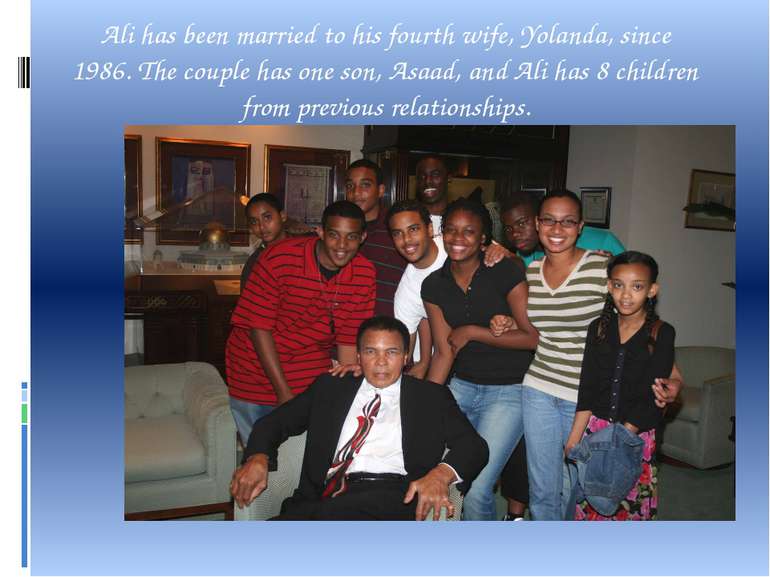 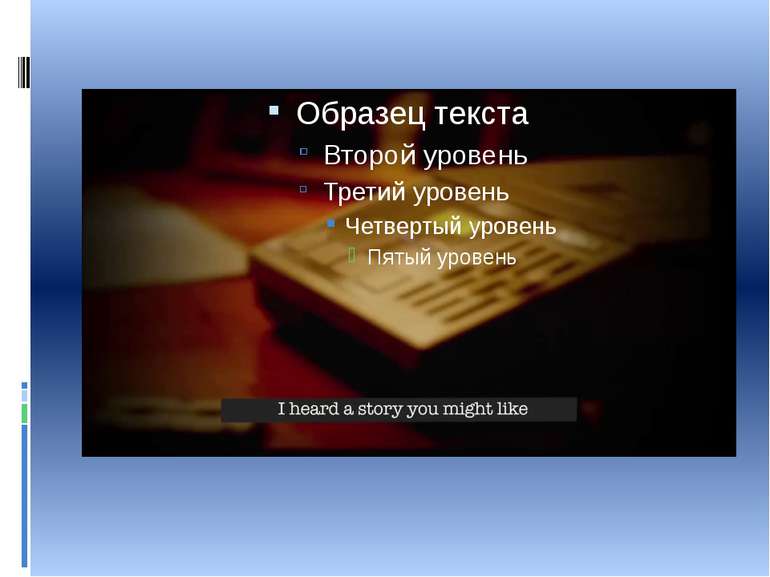 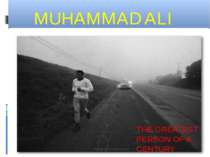 MUHAMMAD ALI THE GREATEST PERSON OF A CENTURY 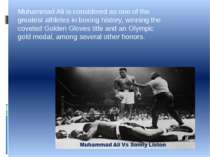 Muhammad Ali is considered as one of the greatest athletes in boxing history, winning the coveted Golden Gloves title and an Olympic gold medal, among several other honors. 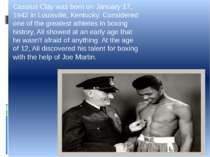 Cassius Clay was born on January 17, 1942 in Louisville, Kentucky. Considered one of the greatest athletes in boxing history, Ali showed at an early age that he wasn't afraid of anything. At the age of 12, Ali discovered his talent for boxing with the help of Joe Martin. 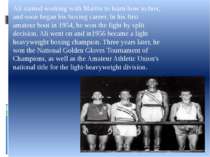 Ali started working with Martin to learn how to box, and soon began his boxing career. In his first amateur bout in 1954, he won the fight by split decision. Ali went on and in1956 became a light heavyweight boxing champion. Three years later, he won the National Golden Gloves Tournament of Champions, as well as the Amateur Athletic Union's national title for the light-heavyweight division. 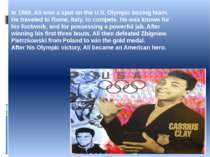 In 1960, Ali won a spot on the U.S. Olympic boxing team. He traveled to Rome, Italy, to compete. He was known for his footwork, and for possessing a powerful jab. After winning his first three bouts, Ali then defeated Zbigniew Pietrzkowski from Poland to win the gold medal. After his Olympic victory, Ali became an American hero. 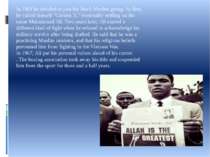 In 1964 he decided to join the black Muslim group. At first, he called himself "Cassius X," eventually settling on the name Muhammad Ali. Two years later, Ali started a different kind of fight when he refused to acknowledge his military service after being drafted. He said that he was a practicing Muslim minister, and that his religious beliefs prevented him from fighting in the Vietnam War. In 1967, Ali put his personal values ahead of his career. . The boxing association took away his title and suspended him from the sport for three and a half years. 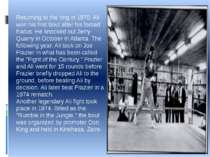 Returning to the ring in 1970, Ali won his first bout after his forced hiatus. He knocked out Jerry Quarry in October in Atlanta. The following year, Ali took on Joe Frazier in what has been called the "Fight of the Century." Frazier and Ali went for 15 rounds before Frazier briefly dropped Ali to the ground, before beating Ali by decision. Ali later beat Frazier in a 1974 rematch. Another legendary Ali fight took place in 1974. Billed as the "Rumble in the Jungle," the bout was organized by promoter Don King and held in Kinshasa, Zaire. 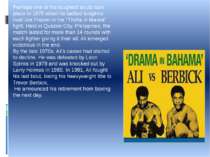 Perhaps one of his toughest bouts took place in 1975 when he battled longtime rival Joe Frazier in the "Thrilla in Manila" fight. Held in Quezon City, Philippines, the match lasted for more than 14 rounds with each fighter giving it their all. Ali emerged victorious in the end. By the late 1970s, Ali's career had started to decline. He was defeated by Leon Spinks in 1978 and was knocked out by Larry Holmes in 1980. In 1981, Ali fought his last bout, losing his heavyweight title to Trevor Berbick. He announced his retirement from boxing the next day. 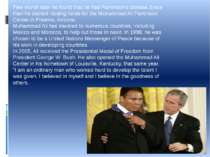 Few month later he found that he had Parkinson's disease.Since than he started raising funds for the Muhammad Ali Parkinson Center in Phoenix, Arizona. Muhammad Ali has traveled to numerous countries, including Mexico and Morocco, to help out those in need. In 1998, he was chosen to be a United Nations Messenger of Peace because of his work in developing countries. In 2005, Ali received the Presidential Medal of Freedom from President George W. Bush. He also opened the Muhammad Ali Center in his hometown of Louisville, Kentucky, that same year. "I am an ordinary man who worked hard to develop the talent I was given, I believed in myself and I believe in the goodness of others. 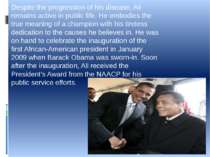 Despite the progression of his disease, Ali remains active in public life. He embodies the true meaning of a champion with his tireless dedication to the causes he believes in. He was on hand to celebrate the inauguration of the first African-American president in January 2009 when Barack Obama was sworn-in. Soon after the inauguration, Ali received the President's Award from the NAACP for his public service efforts. 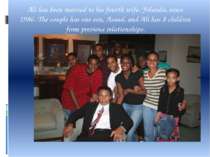 Ali has been married to his fourth wife, Yolanda, since 1986. The couple has one son, Asaad, and Ali has 8 children from previous relationships. 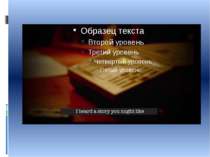