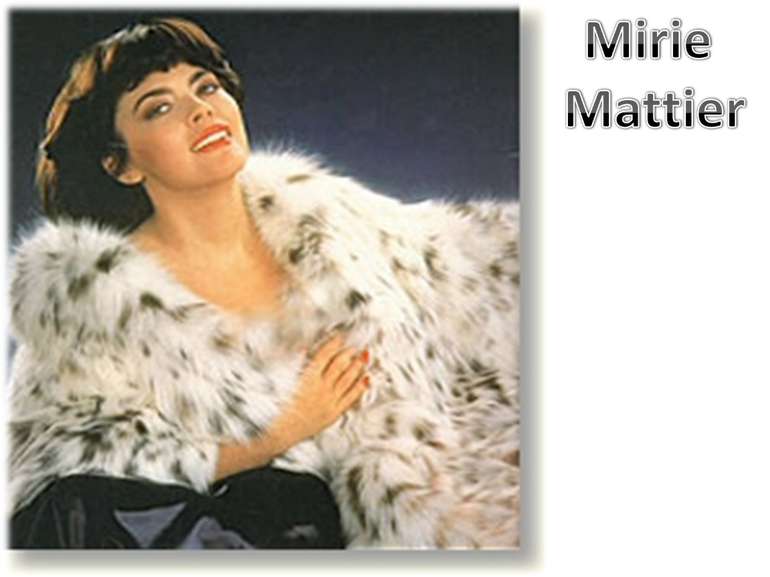 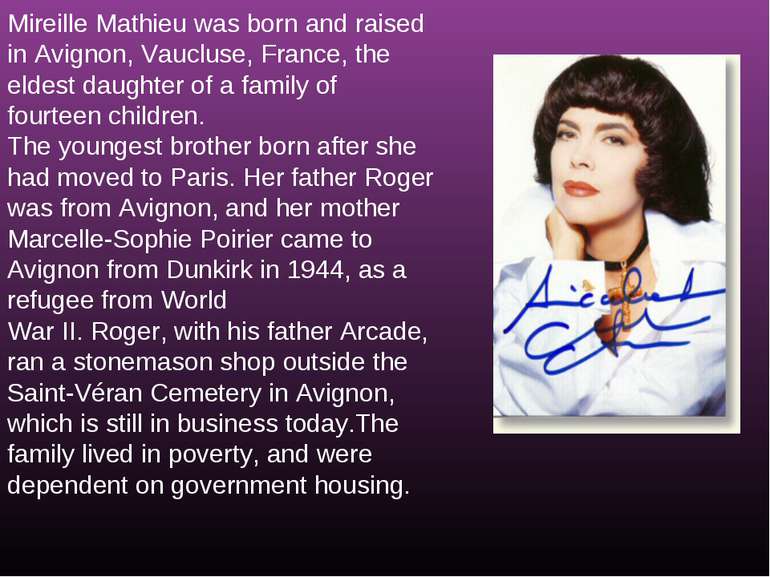 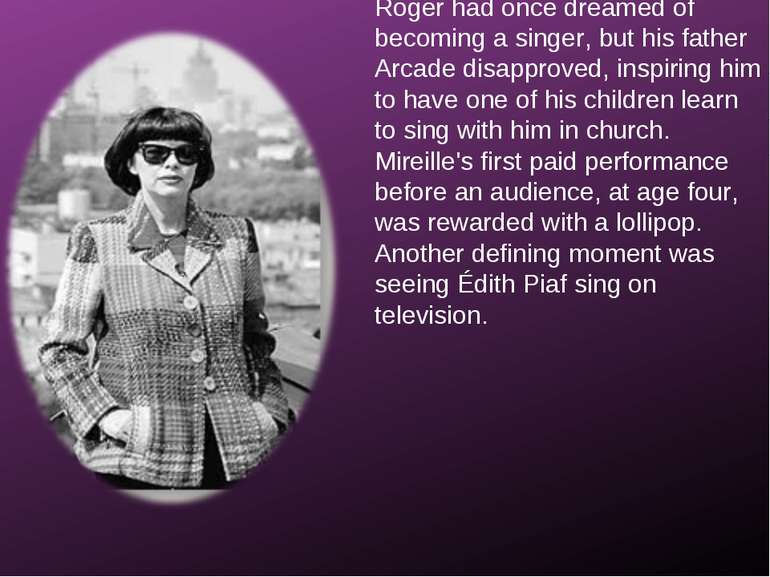 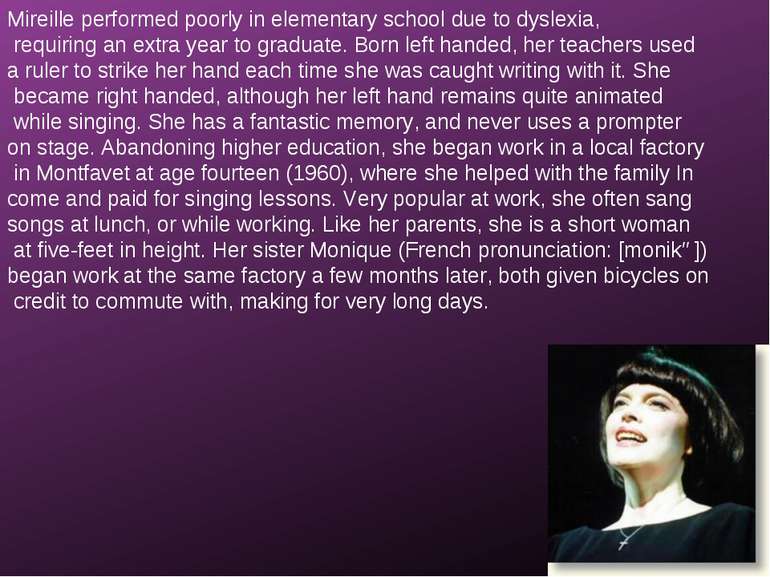 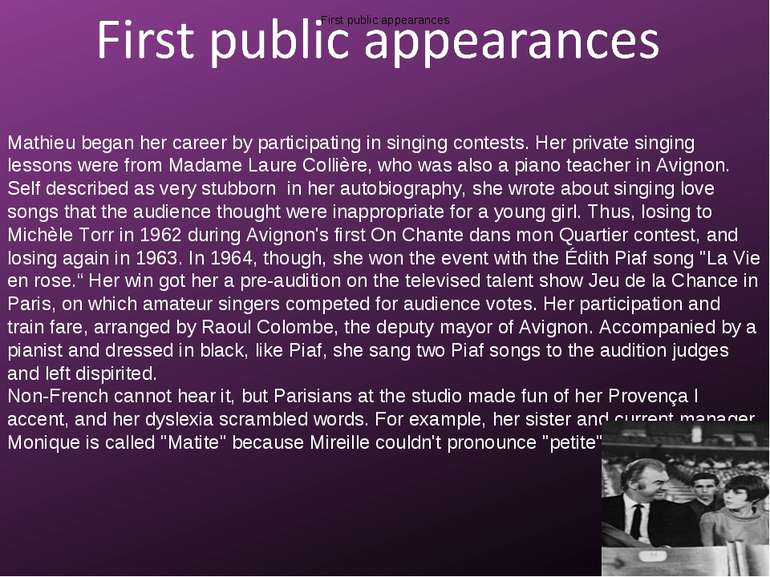 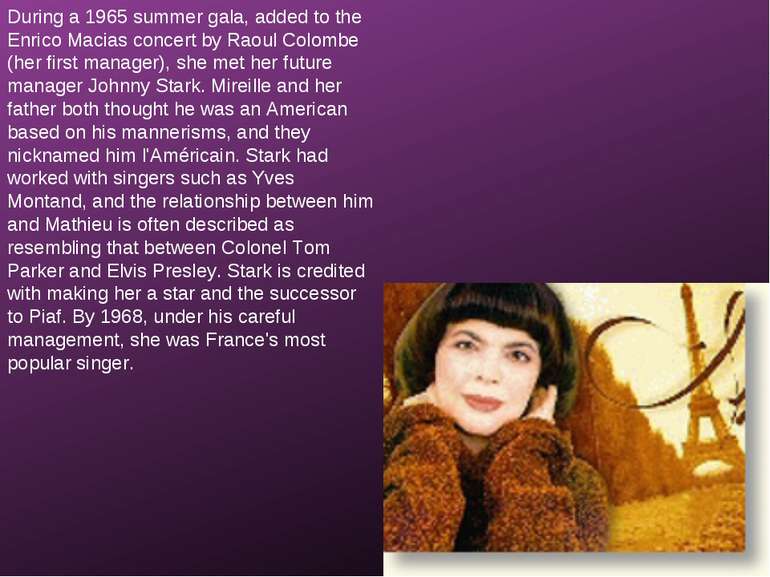 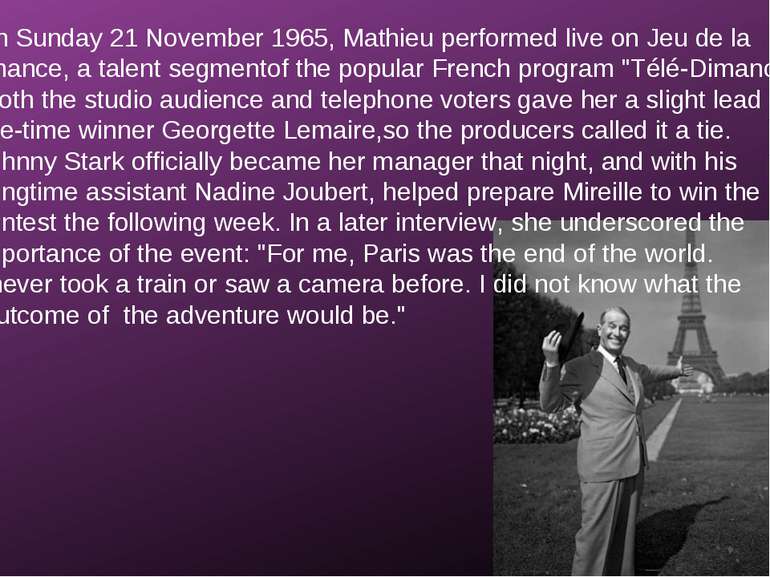 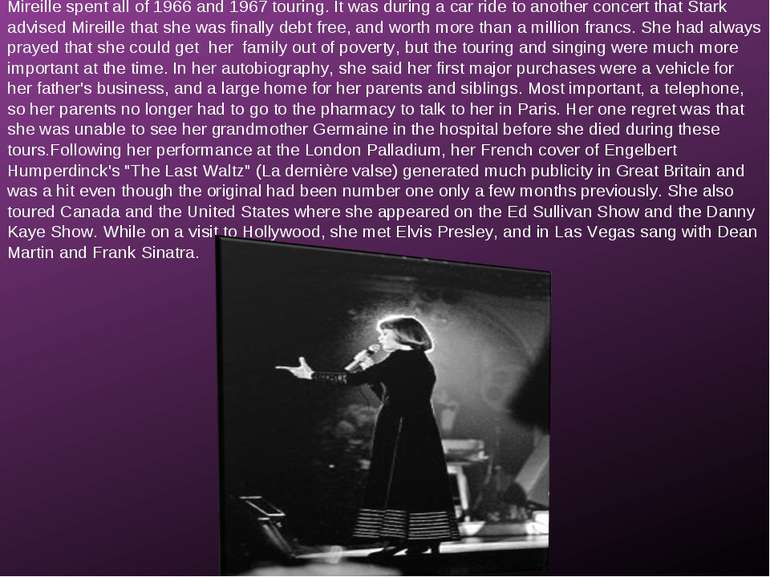 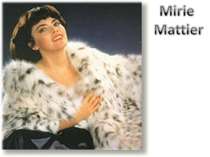 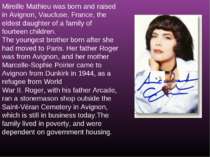 Mireille Mathieu was born and raised in Avignon, Vaucluse, France, the eldest daughter of a family of fourteen children. The youngest brother born after she had moved to Paris. Her father Roger was from Avignon, and her mother Marcelle-Sophie Poirier came to Avignon from Dunkirk in 1944, as a refugee from World War II. Roger, with his father Arcade, ran a stonemason shop outside the Saint-Véran Cemetery in Avignon, which is still in business today.The family lived in poverty, and were dependent on government housing. 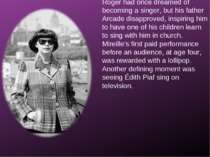 Roger had once dreamed of becoming a singer, but his father Arcade disapproved, inspiring him to have one of his children learn to sing with him in church. Mireille's first paid performance before an audience, at age four, was rewarded with a lollipop. Another defining moment was seeing Édith Piaf sing on television. 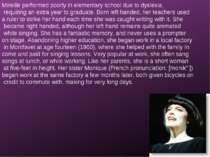 Mireille performed poorly in elementary school due to dyslexia, requiring an extra year to graduate. Born left handed, her teachers used a ruler to strike her hand each time she was caught writing with it. She became right handed, although her left hand remains quite animated while singing. She has a fantastic memory, and never uses a prompter on stage. Abandoning higher education, she began work in a local factory in Montfavet at age fourteen (1960), where she helped with the family In come and paid for singing lessons. Very popular at work, she often sang songs at lunch, or while working. Like her parents, she is a short woman at five-feet in height. Her sister Monique (French pronunciation: [monikə]) began work at the same factory a few months later, both given bicycles on credit to commute with, making for very long days. 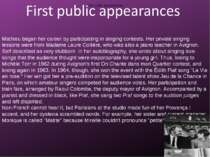 First public appearances Mathieu began her career by participating in singing contests. Her private singing lessons were from Madame Laure Collière, who was also a piano teacher in Avignon. Self described as very stubborn in her autobiography, she wrote about singing love songs that the audience thought were inappropriate for a young girl. Thus, losing to Michèle Torr in 1962 during Avignon's first On Chante dans mon Quartier contest, and losing again in 1963. In 1964, though, she won the event with the Édith Piaf song "La Vie en rose.“ Her win got her a pre-audition on the televised talent show Jeu de la Chance in Paris, on which amateur singers competed for audience votes. Her participation and train fare, arranged by Raoul Colombe, the deputy mayor of Avignon. Accompanied by a pianist and dressed in black, like Piaf, she sang two Piaf songs to the audition judges and left dispirited. Non-French cannot hear it, but Parisians at the studio made fun of her Provença l accent, and her dyslexia scrambled words. For example, her sister and current manager, Monique is called "Matite" because Mireille couldn't pronounce "petite" as a child. 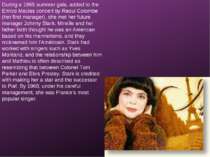 During a 1965 summer gala, added to the Enrico Macias concert by Raoul Colombe (her first manager), she met her future manager Johnny Stark. Mireille and her father both thought he was an American based on his mannerisms, and they nicknamed him l'Américain. Stark had worked with singers such as Yves Montand, and the relationship between him and Mathieu is often described as resembling that between Colonel Tom Parker and Elvis Presley. Stark is credited with making her a star and the successor to Piaf. By 1968, under his careful management, she was France's most popular singer. 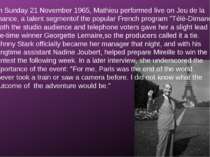 On Sunday 21 November 1965, Mathieu performed live on Jeu de la Chance, a talent segmentof the popular French program "Télé-Dimanche.“ Both the studio audience and telephone voters gave her a slight lead over five-time winner Georgette Lemaire,so the producers called it a tie. Johnny Stark officially became her manager that night, and with his longtime assistant Nadine Joubert, helped prepare Mireille to win the contest the following week. In a later interview, she underscored the importance of the event: "For me, Paris was the end of the world. I never took a train or saw a camera before. I did not know what the outcome of the adventure would be." 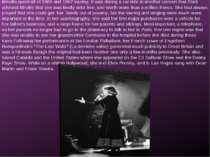 Mireille spent all of 1966 and 1967 touring. It was during a car ride to another concert that Stark advised Mireille that she was finally debt free, and worth more than a million francs. She had always prayed that she could get her family out of poverty, but the touring and singing were much more important at the time. In her autobiography, she said her first major purchases were a vehicle for her father's business, and a large home for her parents and siblings. Most important, a telephone, so her parents no longer had to go to the pharmacy to talk to her in Paris. Her one regret was that she was unable to see her grandmother Germaine in the hospital before she died during these tours.Following her performance at the London Palladium, her French cover of Engelbert Humperdinck's "The Last Waltz" (La dernière valse) generated much publicity in Great Britain and was a hit even though the original had been number one only a few months previously. She also toured Canada and the United States where she appeared on the Ed Sullivan Show and the Danny Kaye Show. While on a visit to Hollywood, she met Elvis Presley, and in Las Vegas sang with Dean Martin and Frank Sinatra.