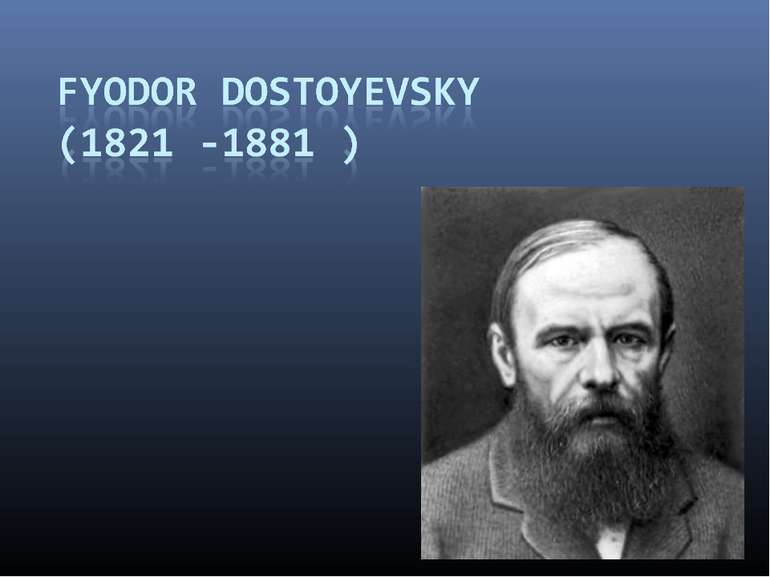 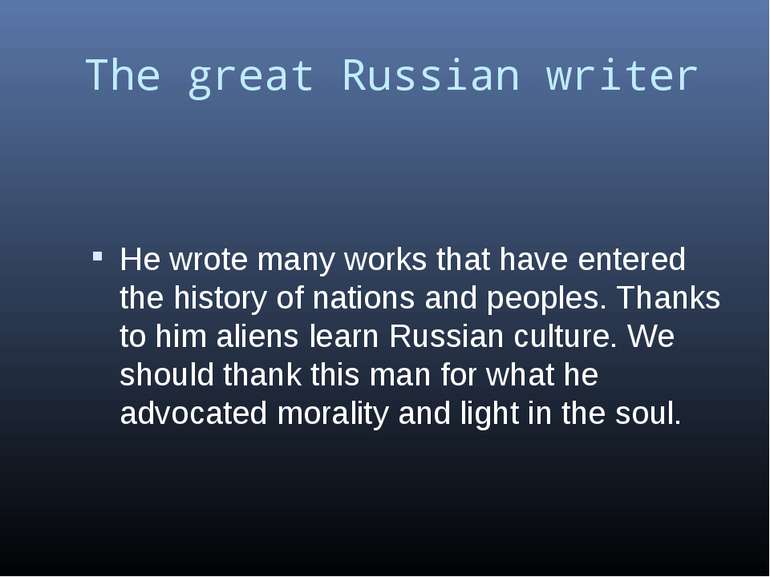 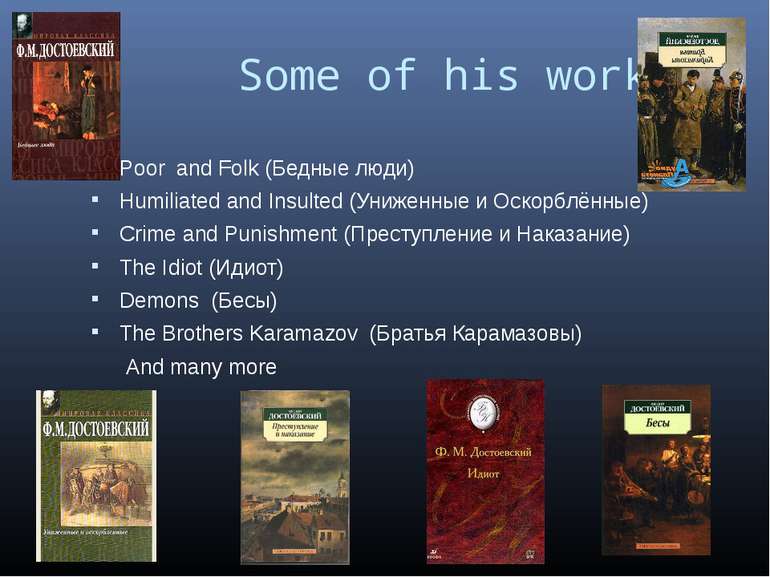 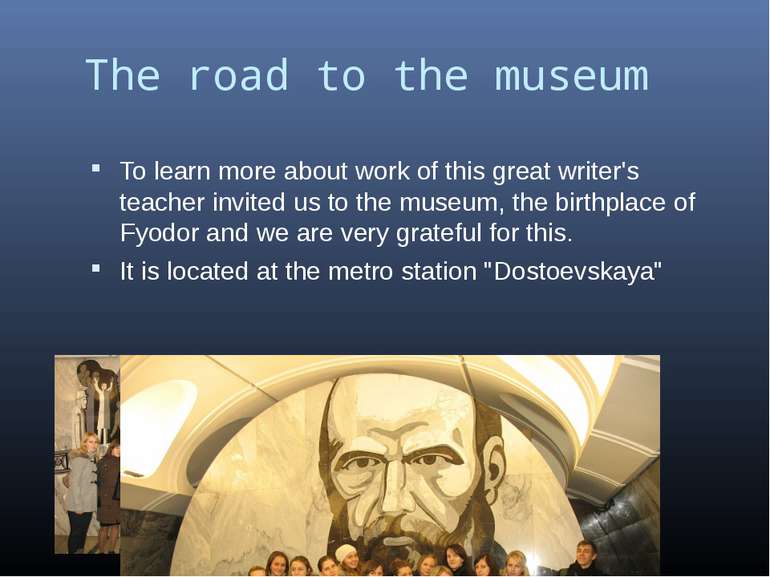 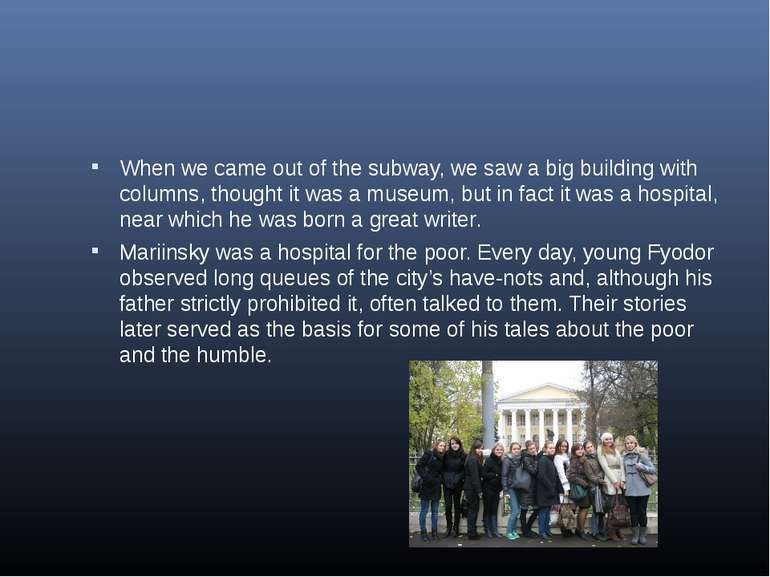 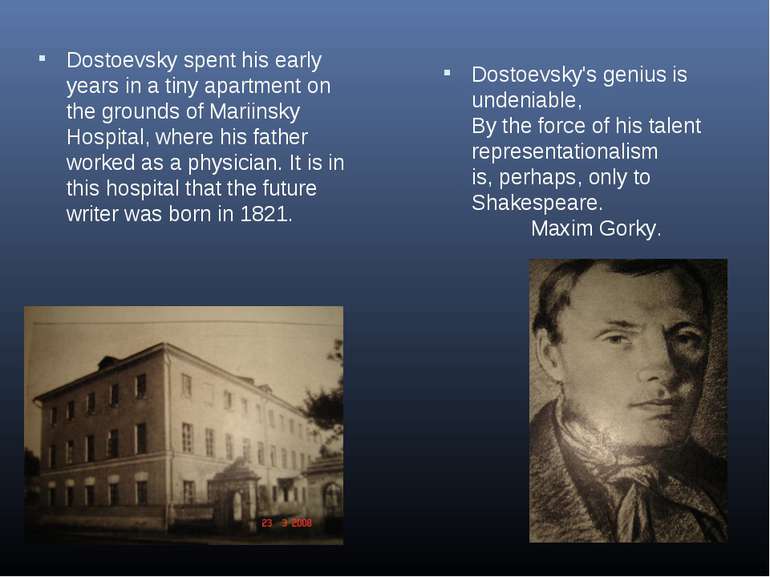 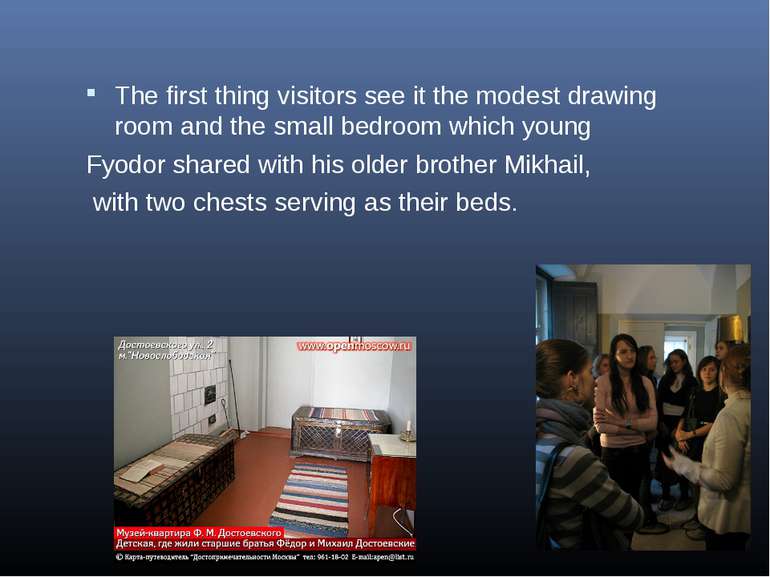 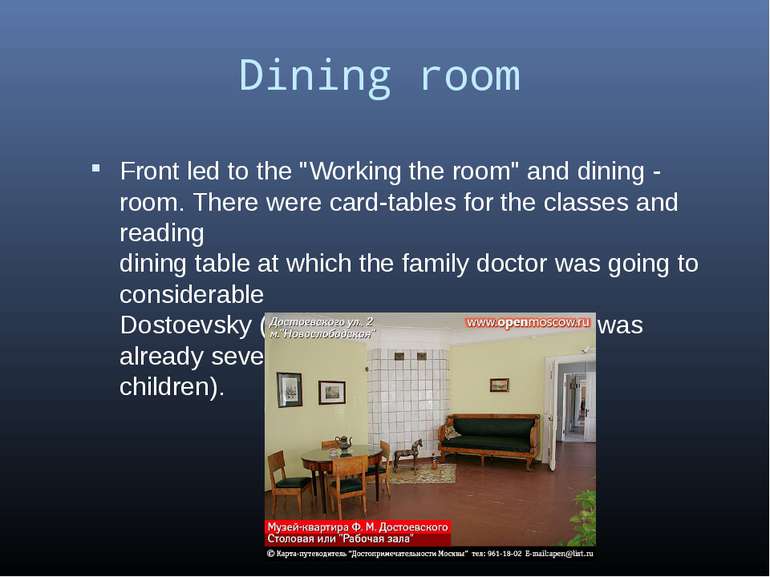 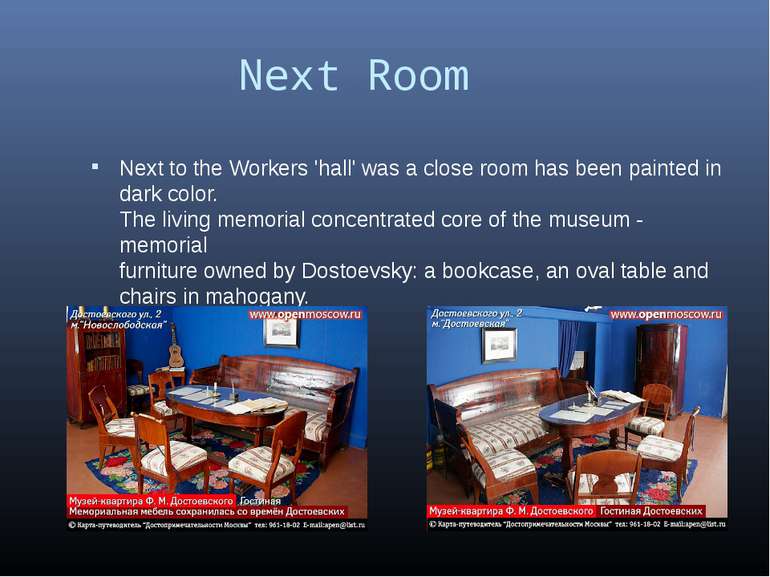 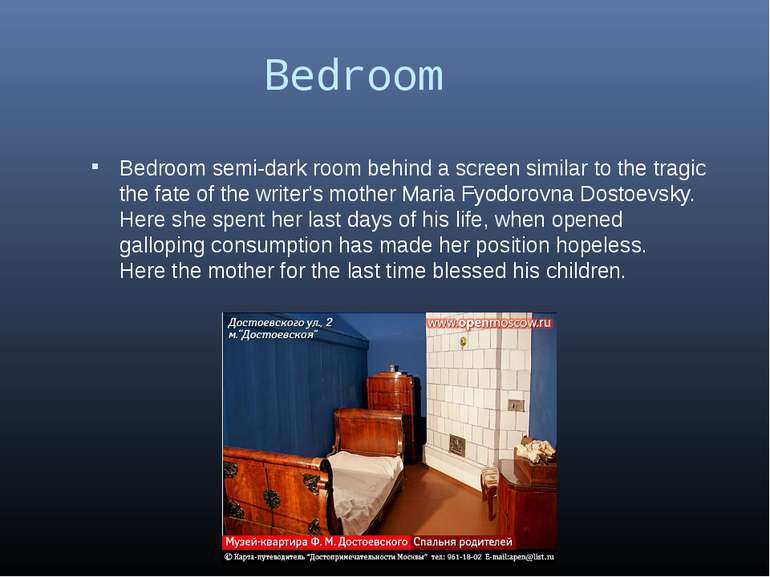 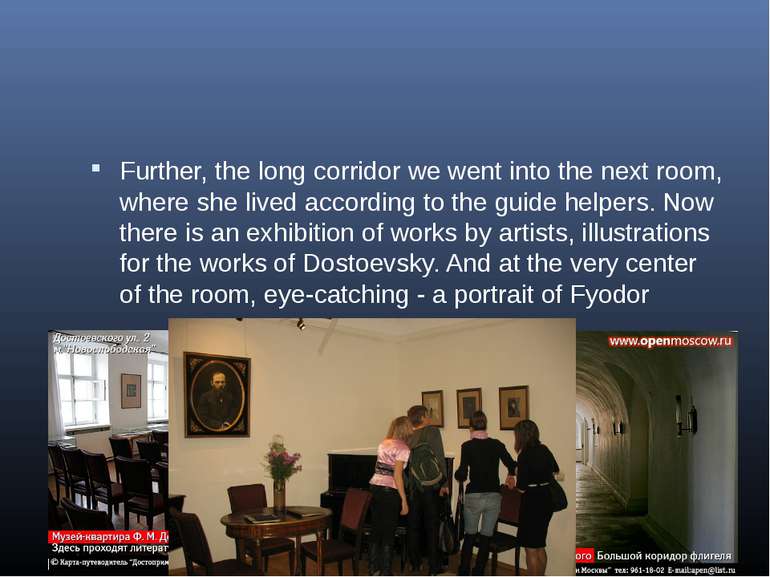 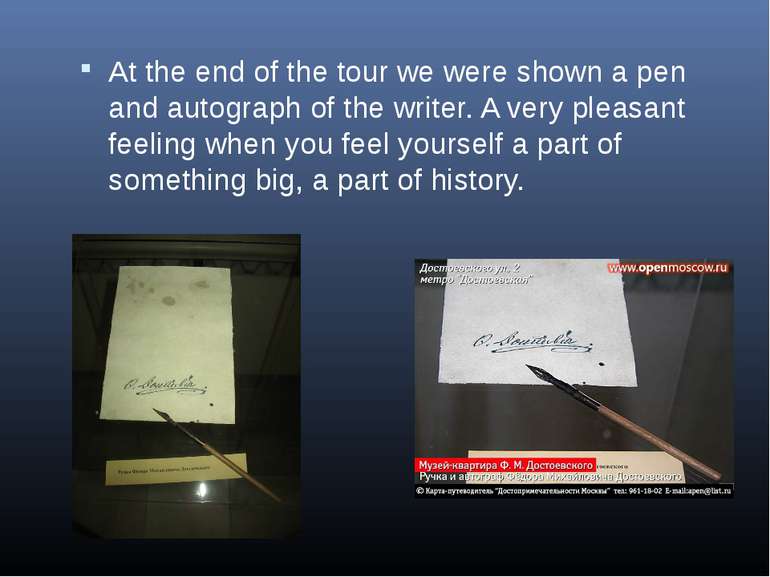 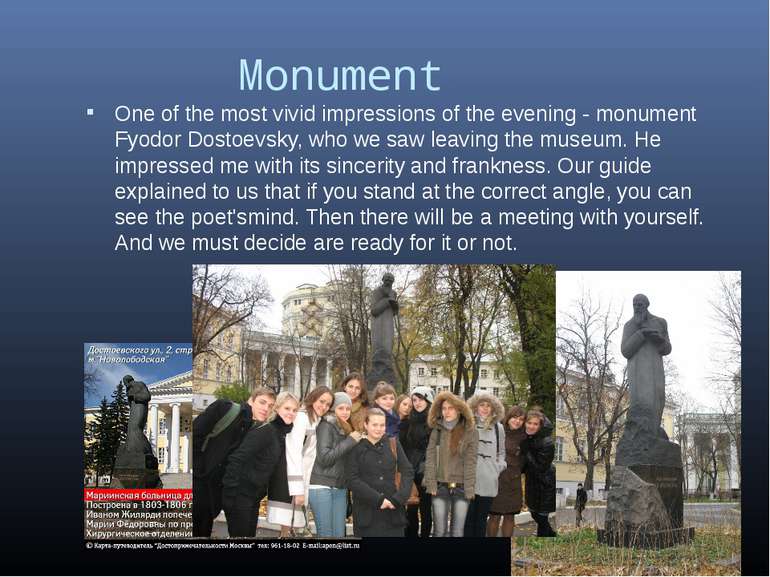 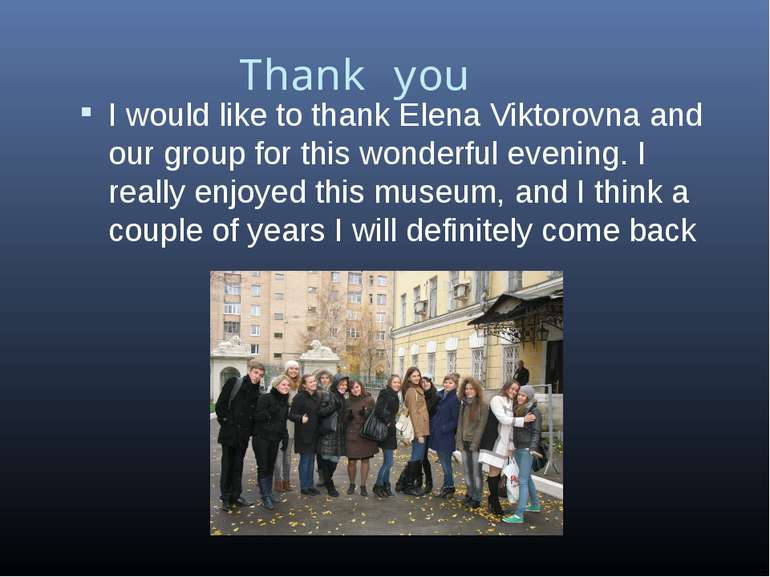 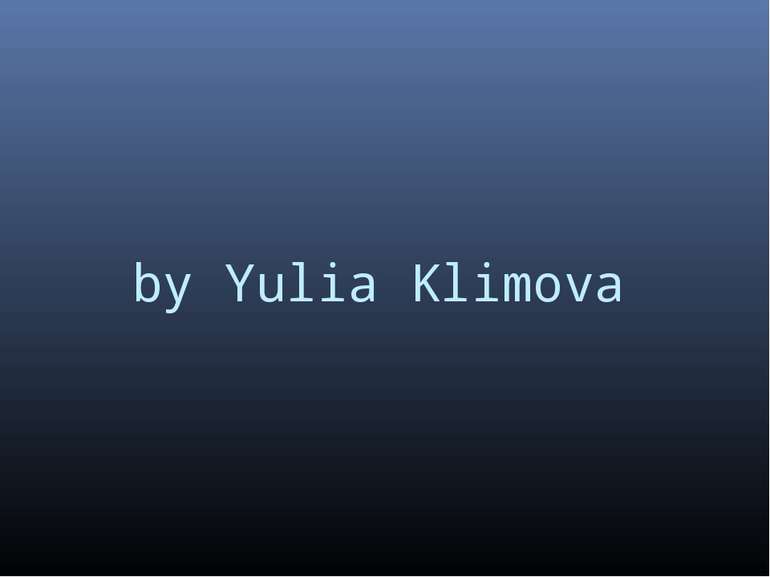 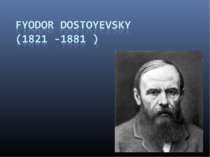 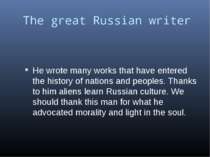 The great Russian writer He wrote many works that have entered the history of nations and peoples. Thanks to him aliens learn Russian culture. We should thank this man for what he advocated morality and light in the soul. 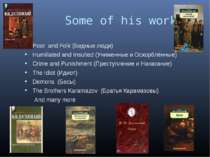 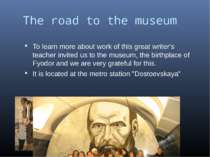 The road to the museum To learn more about work of this great writer's teacher invited us to the museum, the birthplace of Fyodor and we are very grateful for this. It is located at the metro station "Dostoevskaya" 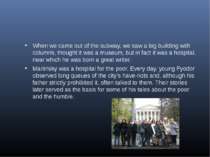 When we came out of the subway, we saw a big building with columns, thought it was a museum, but in fact it was a hospital, near which he was born a great writer. Mariinsky was a hospital for the poor. Every day, young Fyodor observed long queues of the city’s have-nots and, although his father strictly prohibited it, often talked to them. Their stories later served as the basis for some of his tales about the poor and the humble. 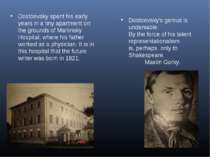 Dostoevsky spent his early years in a tiny apartment on the grounds of Mariinsky Hospital, where his father worked as a physician. It is in this hospital that the future writer was born in 1821. Dostoevsky's genius is undeniable, By the force of his talent representationalism is, perhaps, only to Shakespeare.           Maxim Gorky. 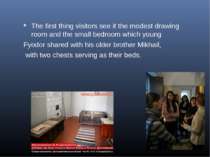 The first thing visitors see it the modest drawing room and the small bedroom which young Fyodor shared with his older brother Mikhail, with two chests serving as their beds. 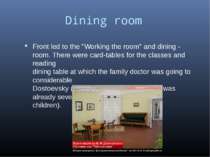 Dining room Front led to the "Working the room" and dining - room. There were card-tables for the classes and reading dining table at which the family doctor was going to considerable Dostoevsky (in the second half of 1830. It was already seven children). 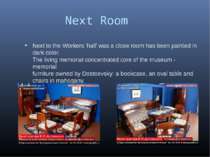 Next Room Next to the Workers 'hall' was a close room has been painted in dark color. The living memorial concentrated core of the museum - memorial furniture owned by Dostoevsky: a bookcase, an oval table and chairs in mahogany. 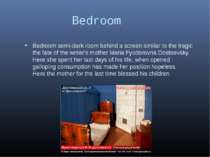 Bedroom Bedroom semi-dark room behind a screen similar to the tragic the fate of the writer's mother Maria Fyodorovna Dostoevsky. Here she spent her last days of his life, when opened galloping consumption has made her position hopeless. Here the mother for the last time blessed his children. 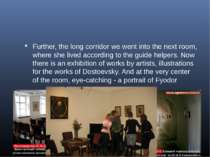 Further, the long corridor we went into the next room, where she lived according to the guide helpers. Now there is an exhibition of works by artists, illustrations for the works of Dostoevsky. And at the very center of the room, eye-catching - a portrait of Fyodor 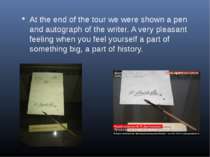 At the end of the tour we were shown a pen and autograph of the writer. A very pleasant feeling when you feel yourself a part of something big, a part of history. 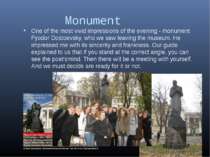 Monument One of the most vivid impressions of the evening - monument Fyodor Dostoevsky, who we saw leaving the museum. He impressed me with its sincerity and frankness. Our guide explained to us that if you stand at the correct angle, you can see the poet'smind. Then there will be a meeting with yourself. And we must decide are ready for it or not. 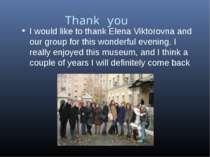 Thank you I would like to thank Elena Viktorovna and our group for this wonderful evening. I really enjoyed this museum, and I think a couple of years I will definitely come back 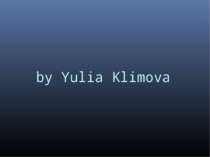