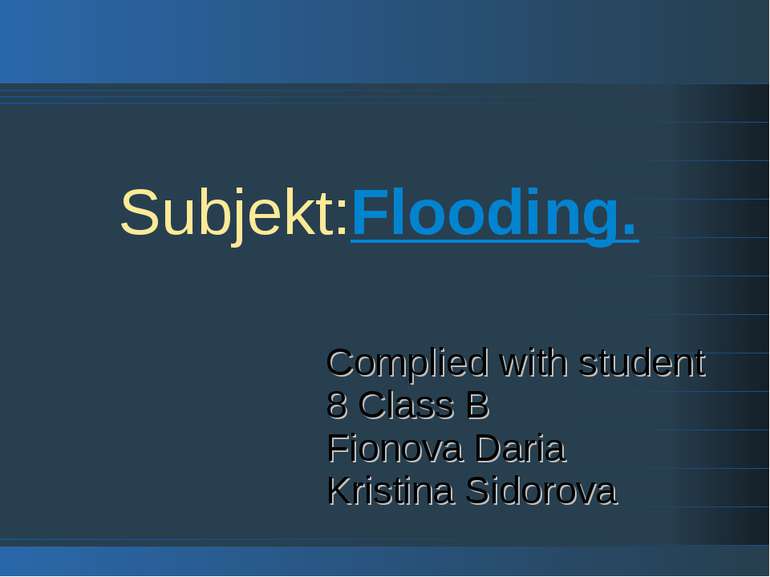 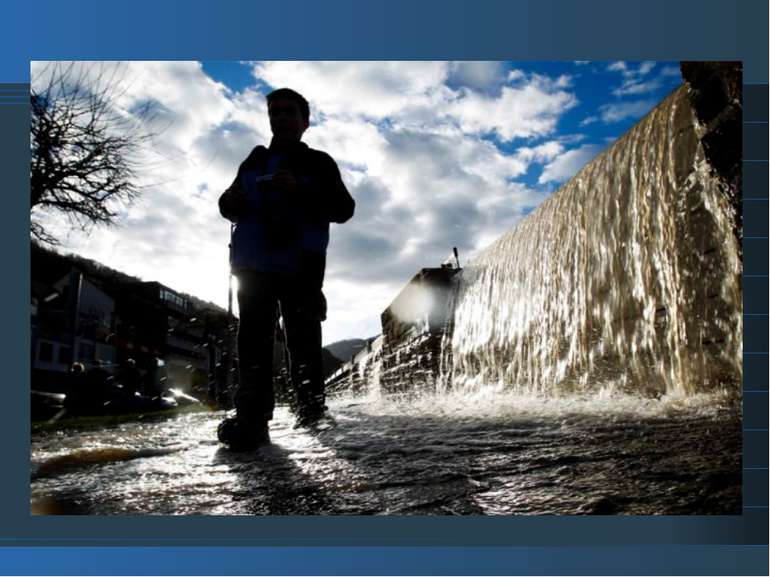 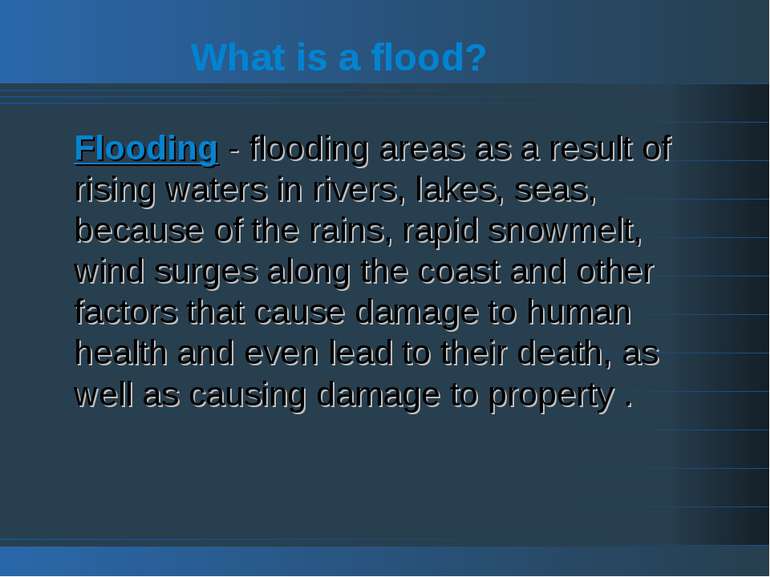 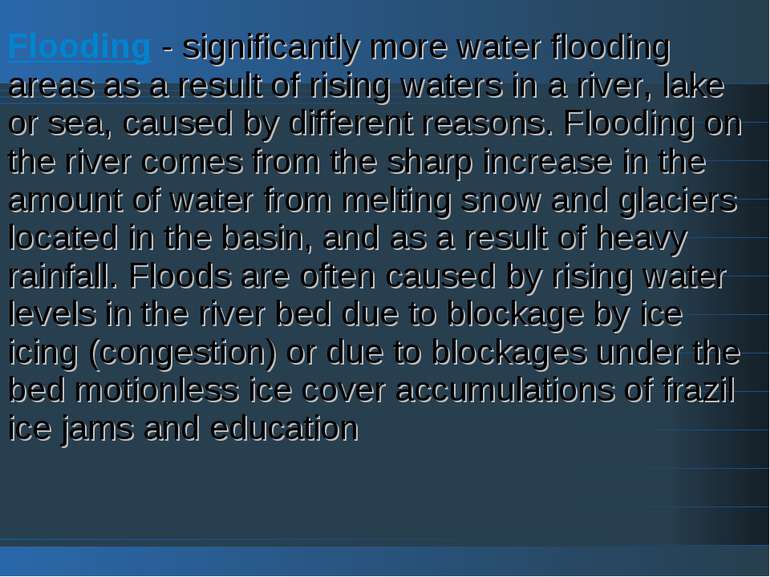 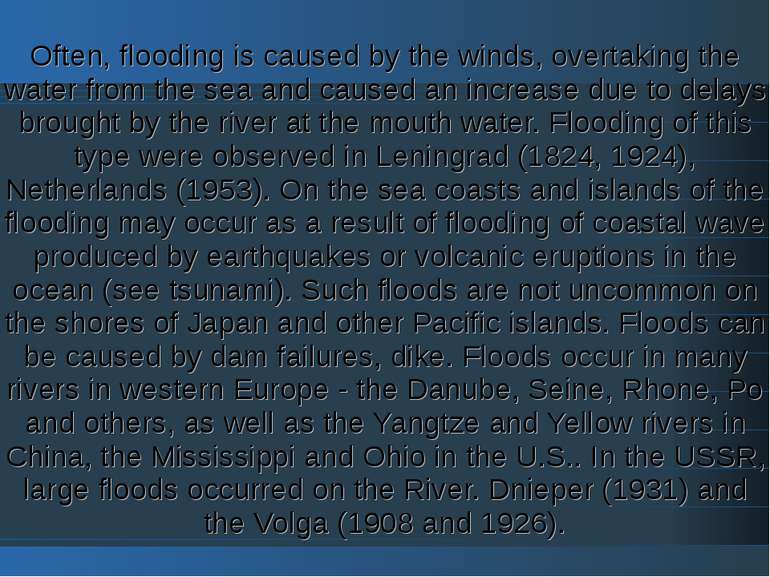 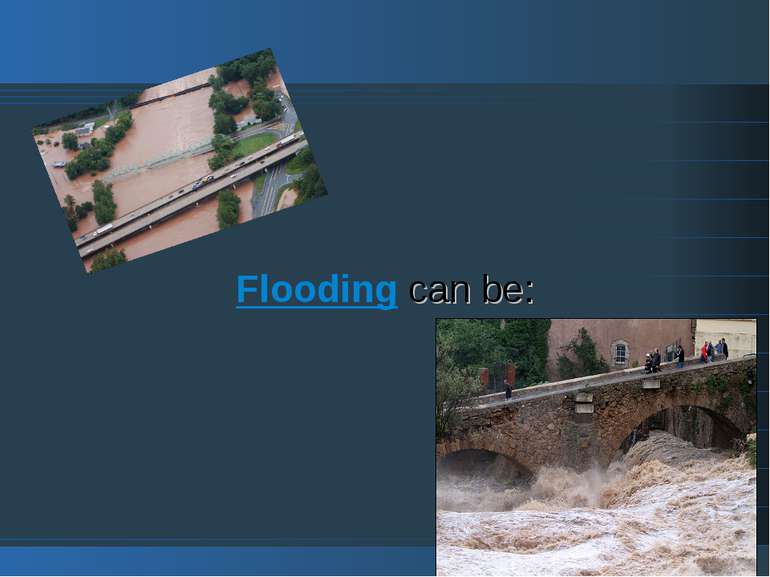 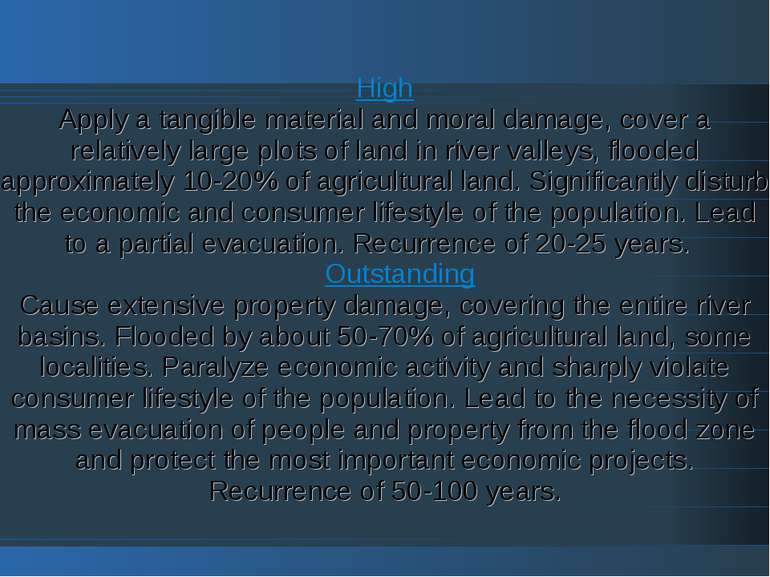 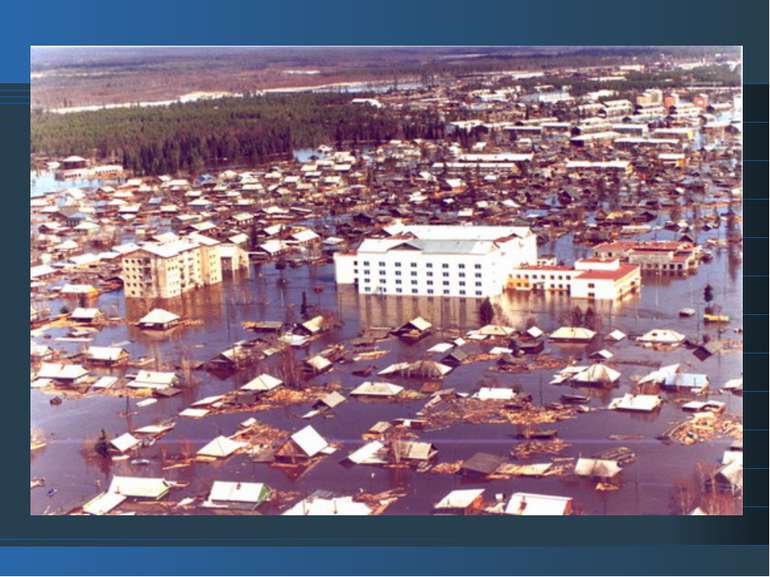 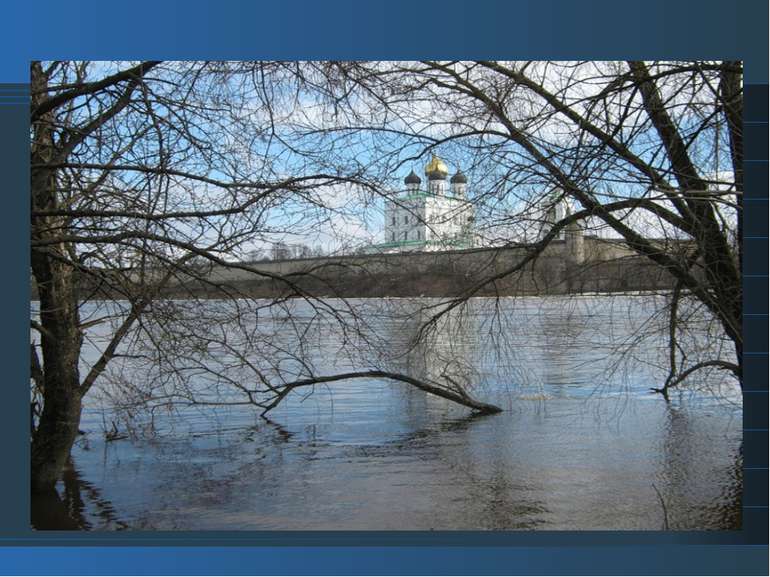 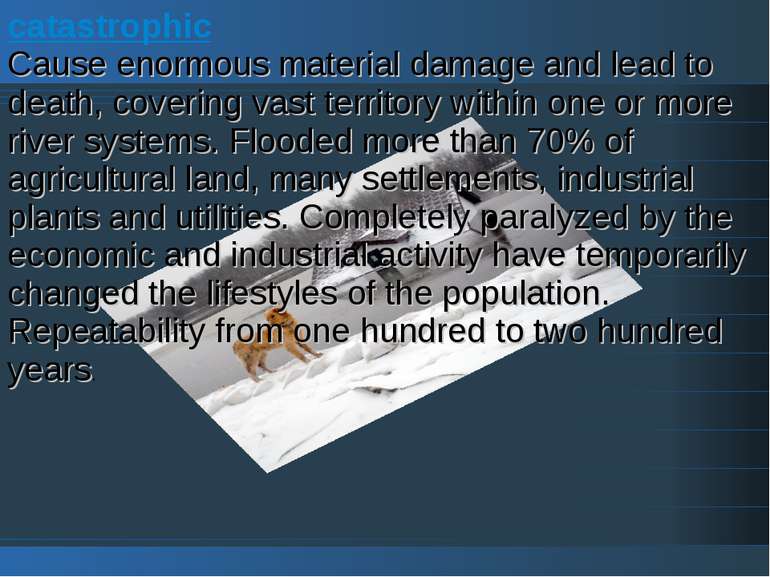 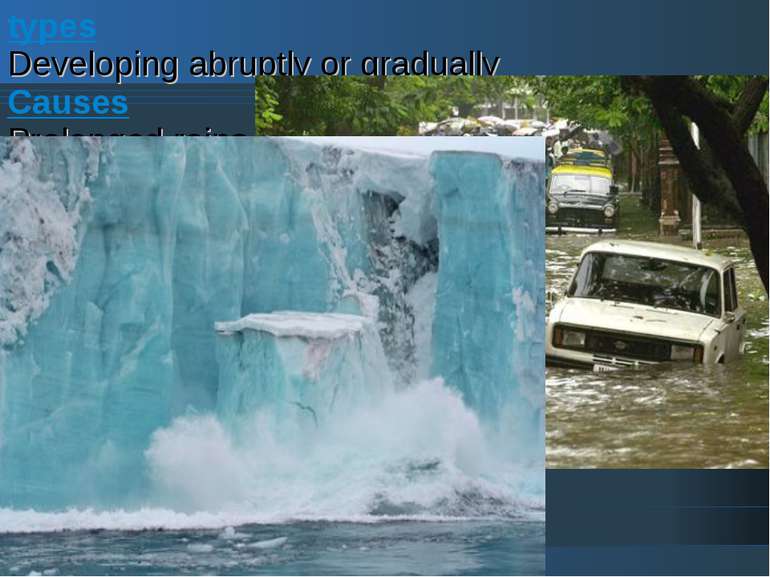 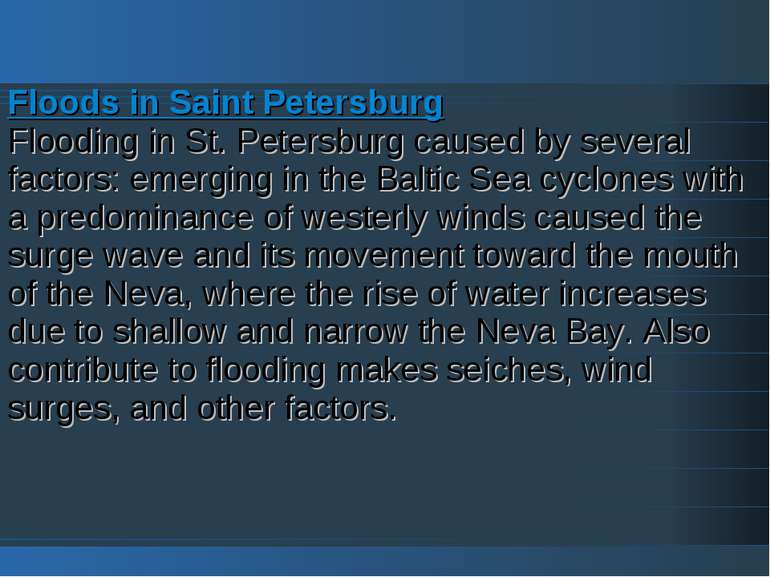 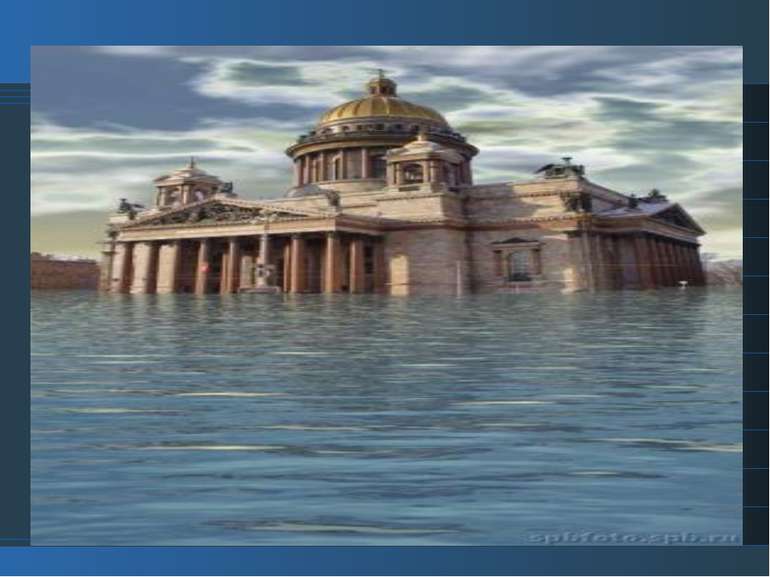 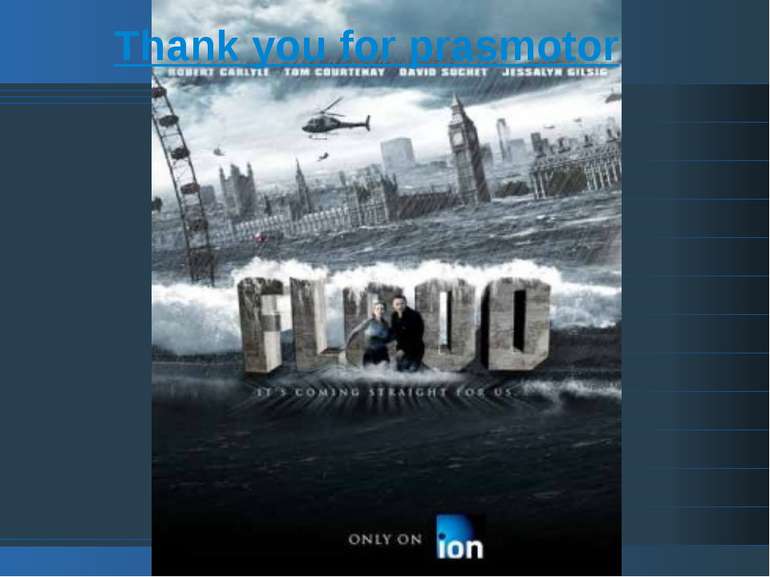 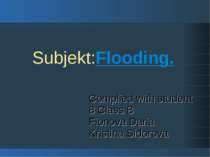 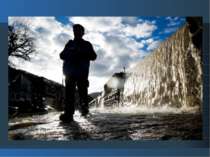 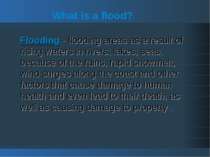 What is a flood? Flooding - flooding areas as a result of rising waters in rivers, lakes, seas, because of the rains, rapid snowmelt, wind surges along the coast and other factors that cause damage to human health and even lead to their death, as well as causing damage to property . 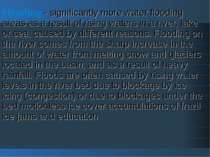 Flooding - significantly more water flooding areas as a result of rising waters in a river, lake or sea, caused by different reasons. Flooding on the river comes from the sharp increase in the amount of water from melting snow and glaciers located in the basin, and as a result of heavy rainfall. Floods are often caused by rising water levels in the river bed due to blockage by ice icing (congestion) or due to blockages under the bed motionless ice cover accumulations of frazil ice jams and education 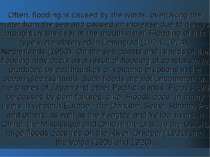 Often, flooding is caused by the winds, overtaking the water from the sea and caused an increase due to delays brought by the river at the mouth water. Flooding of this type were observed in Leningrad (1824, 1924), Netherlands (1953). On the sea coasts and islands of the flooding may occur as a result of flooding of coastal wave produced by earthquakes or volcanic eruptions in the ocean (see tsunami). Such floods are not uncommon on the shores of Japan and other Pacific islands. Floods can be caused by dam failures, dike. Floods occur in many rivers in western Europe - the Danube, Seine, Rhone, Po and others, as well as the Yangtze and Yellow rivers in China, the Mississippi and Ohio in the U.S.. In the USSR, large floods occurred on the River. Dnieper (1931) and the Volga (1908 and 1926). 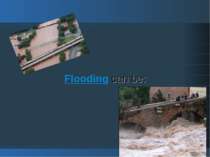 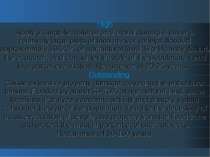 High Apply a tangible material and moral damage, cover a relatively large plots of land in river valleys, flooded approximately 10-20% of agricultural land. Significantly disturb the economic and consumer lifestyle of the population. Lead to a partial evacuation. Recurrence of 20-25 years. Outstanding Cause extensive property damage, covering the entire river basins. Flooded by about 50-70% of agricultural land, some localities. Paralyze economic activity and sharply violate consumer lifestyle of the population. Lead to the necessity of mass evacuation of people and property from the flood zone and protect the most important economic projects. Recurrence of 50-100 years. 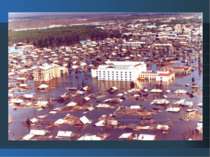 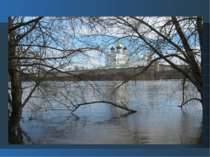 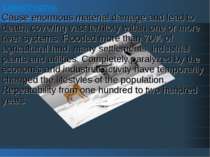 catastrophic Cause enormous material damage and lead to death, covering vast territory within one or more river systems. Flooded more than 70% of agricultural land, many settlements, industrial plants and utilities. Completely paralyzed by the economic and industrial activity have temporarily changed the lifestyles of the population. Repeatability from one hundred to two hundred years. 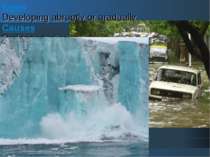 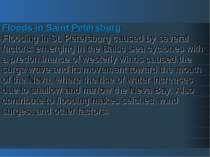 Floods in Saint Petersburg Flooding in St. Petersburg caused by several factors: emerging in the Baltic Sea cyclones with a predominance of westerly winds caused the surge wave and its movement toward the mouth of the Neva, where the rise of water increases due to shallow and narrow the Neva Bay. Also contribute to flooding makes seiches, wind surges, and other factors. 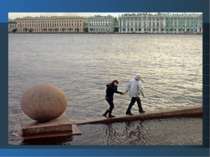 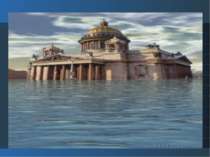 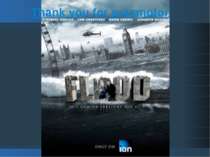 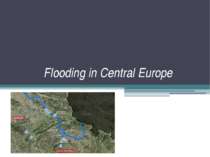