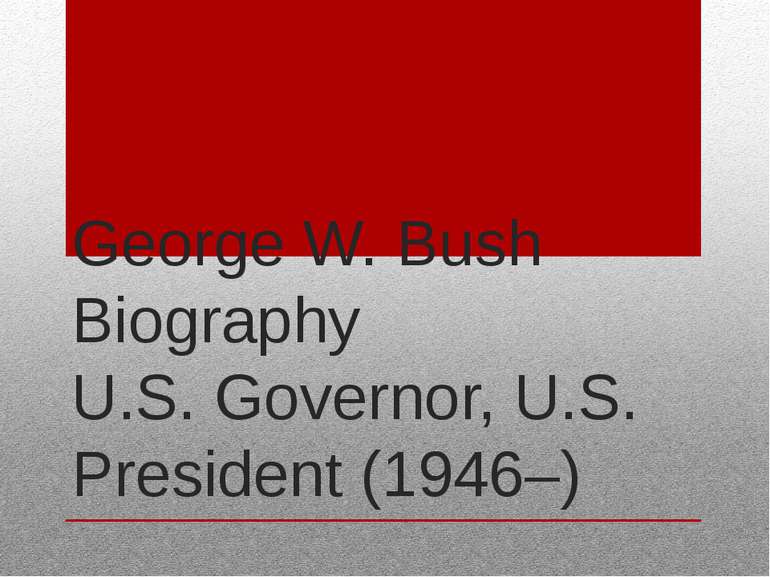 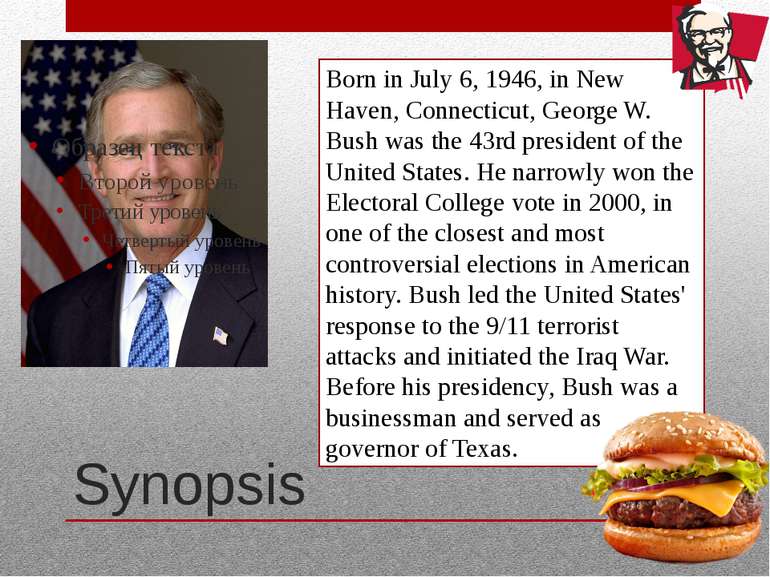 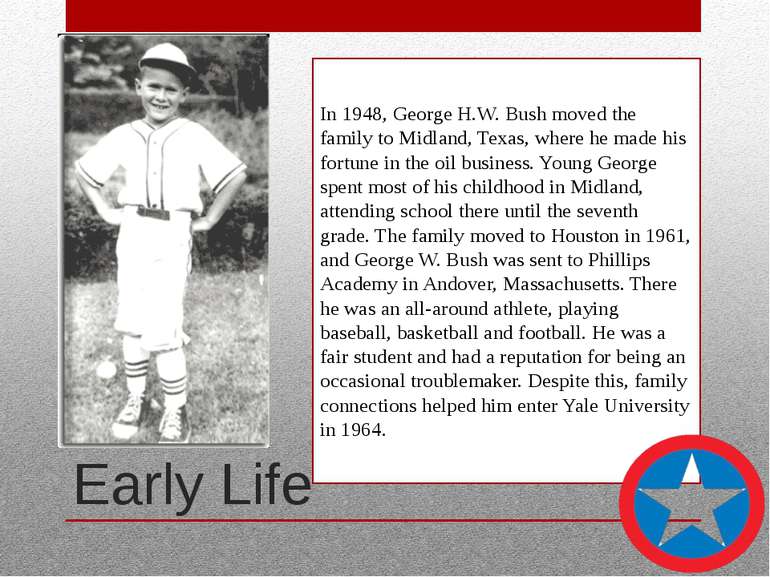 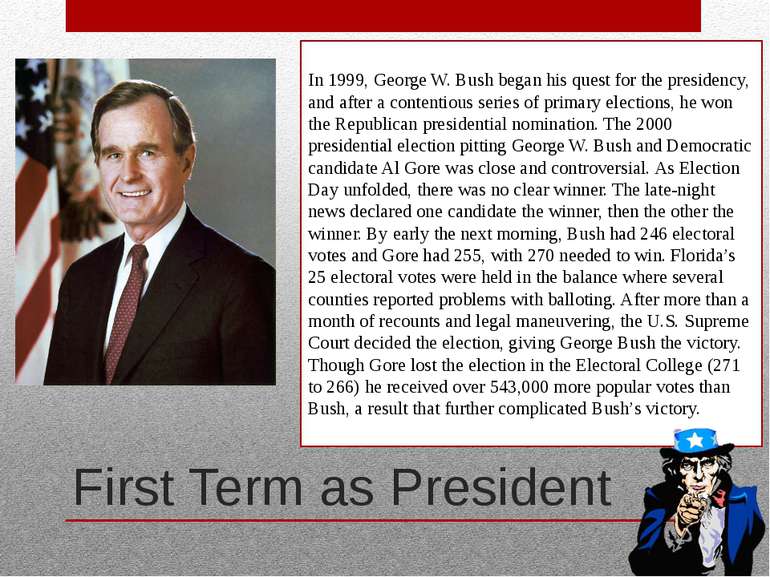 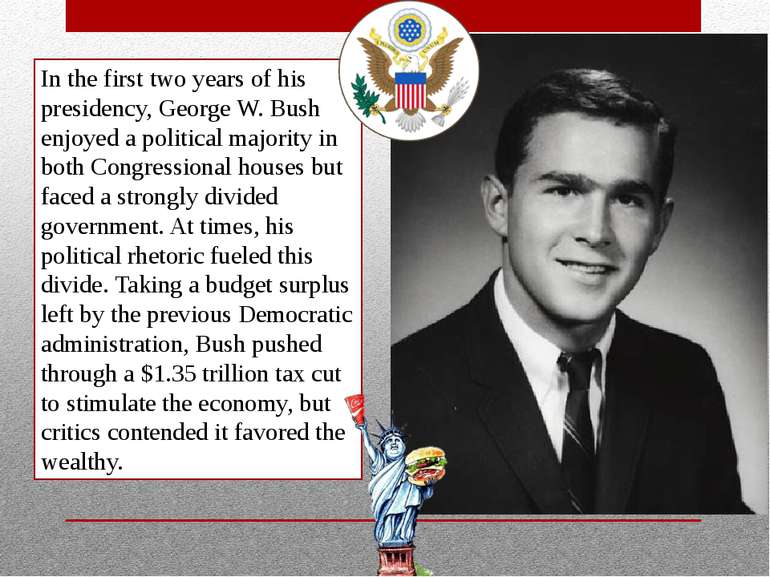 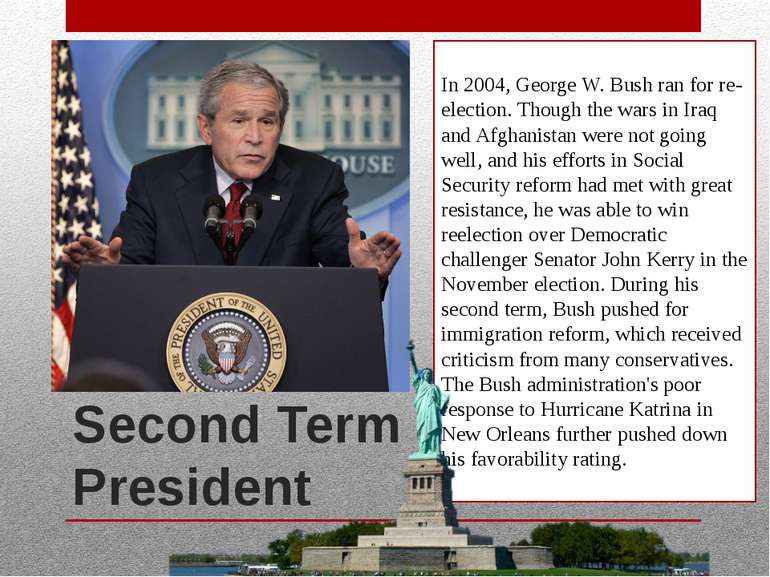 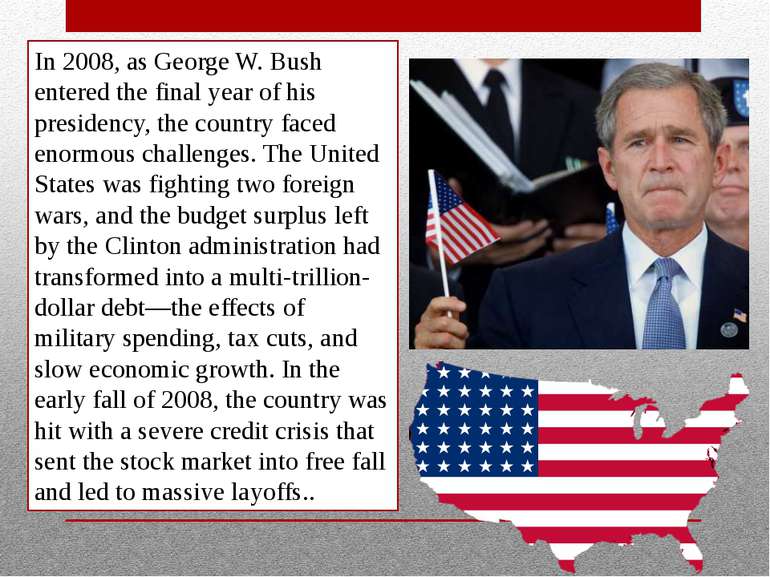 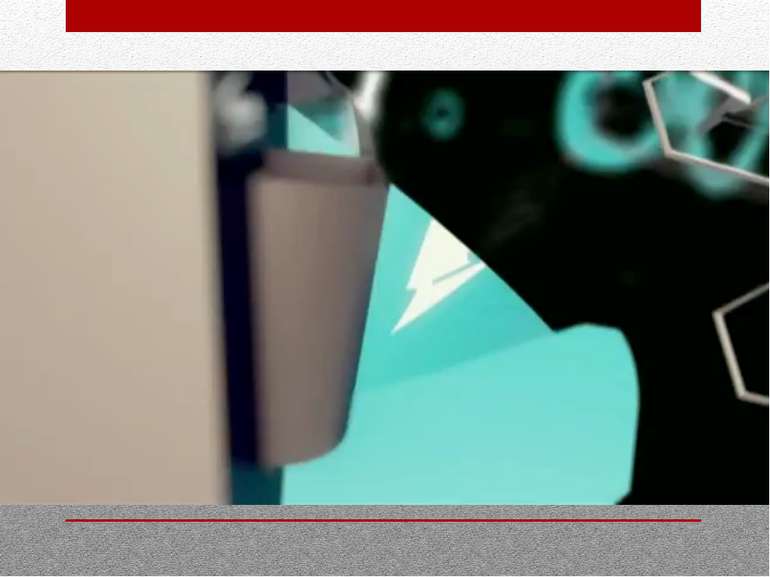 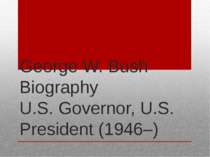 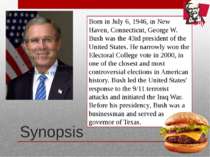 Synopsis Born in July 6, 1946, in New Haven, Connecticut, George W. Bush was the 43rd president of the United States. He narrowly won the Electoral College vote in 2000, in one of the closest and most controversial elections in American history. Bush led the United States' response to the 9/11 terrorist attacks and initiated the Iraq War. Before his presidency, Bush was a businessman and served as governor of Texas. 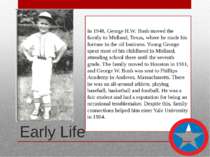 Early Life In 1948, George H.W. Bush moved the family to Midland, Texas, where he made his fortune in the oil business. Young George spent most of his childhood in Midland, attending school there until the seventh grade. The family moved to Houston in 1961, and George W. Bush was sent to Phillips Academy in Andover, Massachusetts. There he was an all-around athlete, playing baseball, basketball and football. He was a fair student and had a reputation for being an occasional troublemaker. Despite this, family connections helped him enter Yale University in 1964. 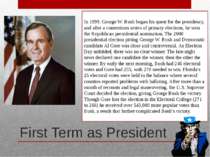 First Term as President In 1999, George W. Bush began his quest for the presidency, and after a contentious series of primary elections, he won the Republican presidential nomination. The 2000 presidential election pitting George W. Bush and Democratic candidate Al Gore was close and controversial. As Election Day unfolded, there was no clear winner. The late-night news declared one candidate the winner, then the other the winner. By early the next morning, Bush had 246 electoral votes and Gore had 255, with 270 needed to win. Florida’s 25 electoral votes were held in the balance where several counties reported problems with balloting. After more than a month of recounts and legal maneuvering, the U.S. Supreme Court decided the election, giving George Bush the victory. Though Gore lost the election in the Electoral College (271 to 266) he received over 543,000 more popular votes than Bush, a result that further complicated Bush’s victory. 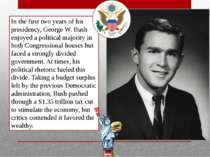 In the first two years of his presidency, George W. Bush enjoyed a political majority in both Congressional houses but faced a strongly divided government. At times, his political rhetoric fueled this divide. Taking a budget surplus left by the previous Democratic administration, Bush pushed through a $1.35 trillion tax cut to stimulate the economy, but critics contended it favored the wealthy. 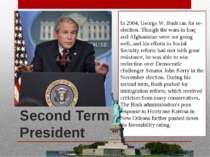 Second Term as President In 2004, George W. Bush ran for re-election. Though the wars in Iraq and Afghanistan were not going well, and his efforts in Social Security reform had met with great resistance, he was able to win reelection over Democratic challenger Senator John Kerry in the November election. During his second term, Bush pushed for immigration reform, which received criticism from many conservatives. The Bush administration's poor response to Hurricane Katrina in New Orleans further pushed down his favorability rating. 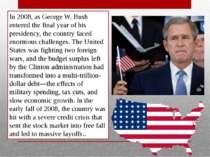 In 2008, as George W. Bush entered the final year of his presidency, the country faced enormous challenges. The United States was fighting two foreign wars, and the budget surplus left by the Clinton administration had transformed into a multi-trillion-dollar debt—the effects of military spending, tax cuts, and slow economic growth. In the early fall of 2008, the country was hit with a severe credit crisis that sent the stock market into free fall and led to massive layoffs.. 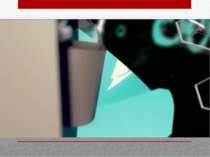