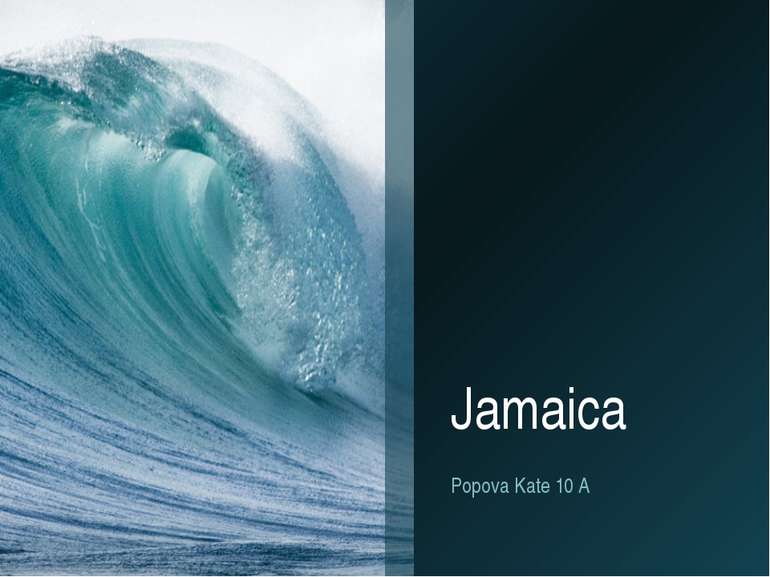 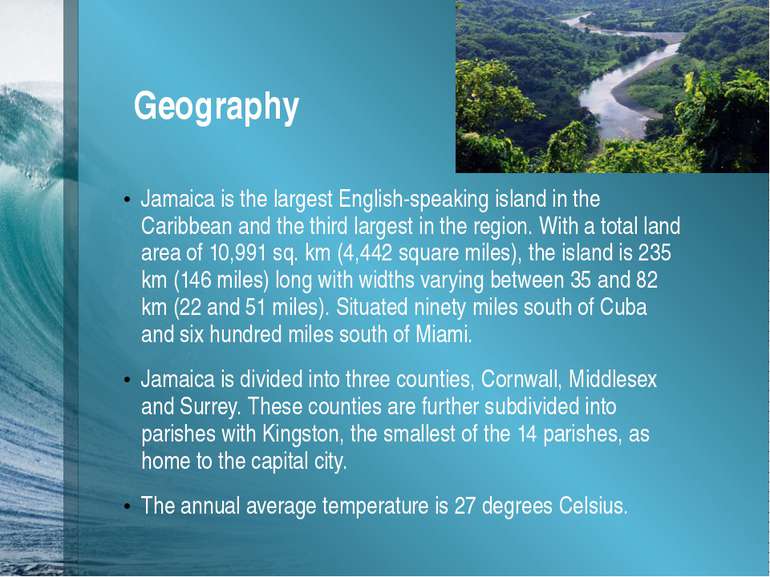 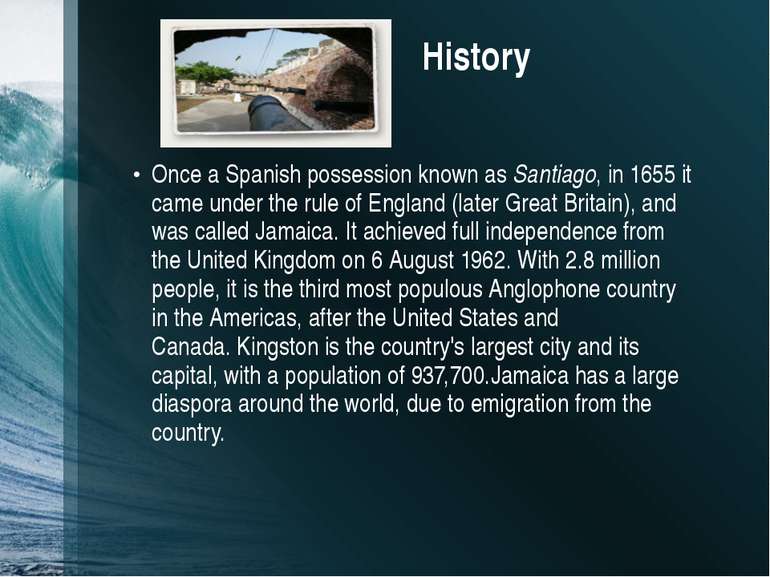 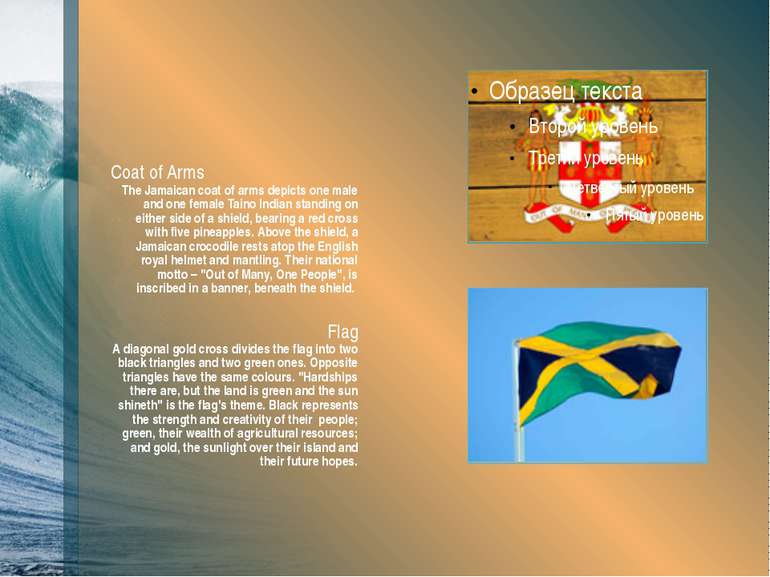 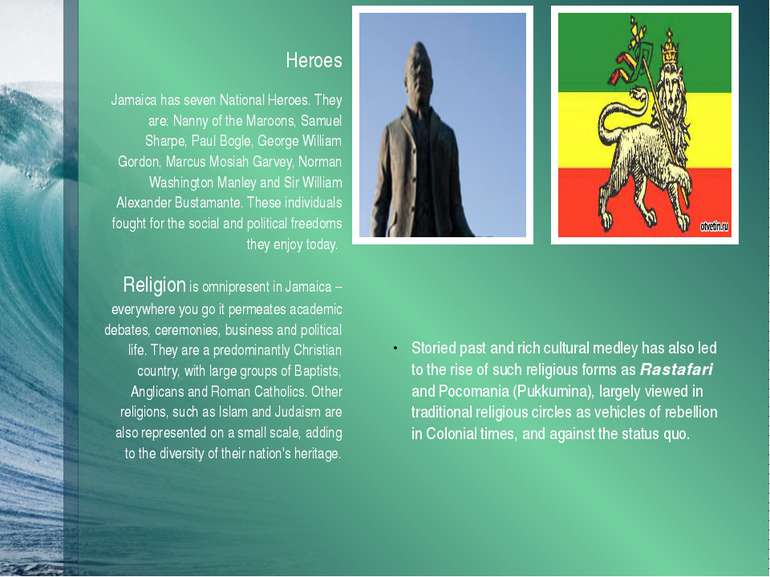 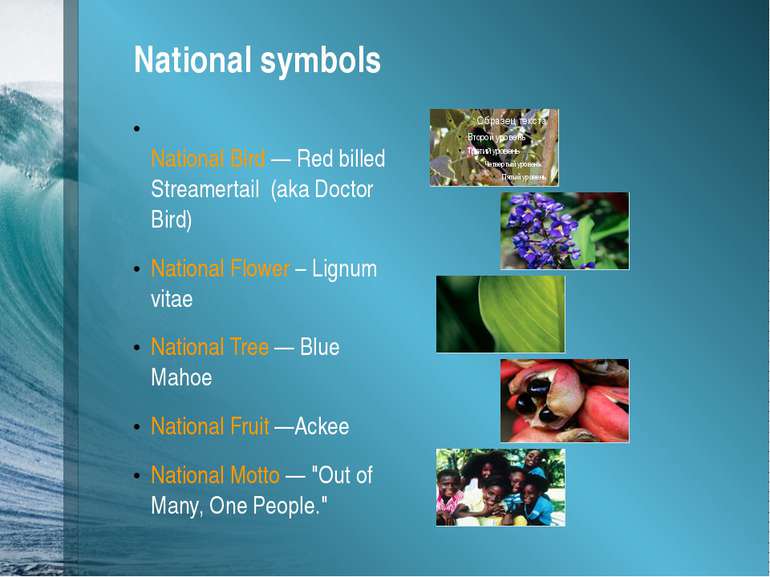 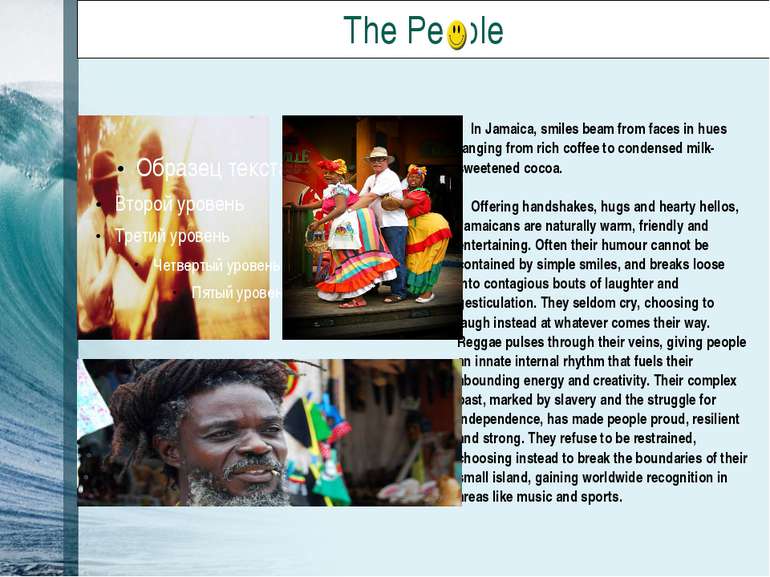 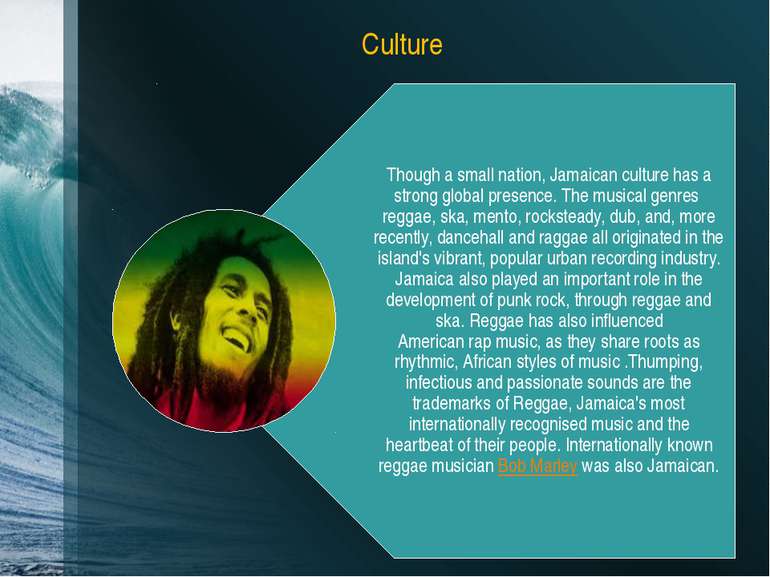 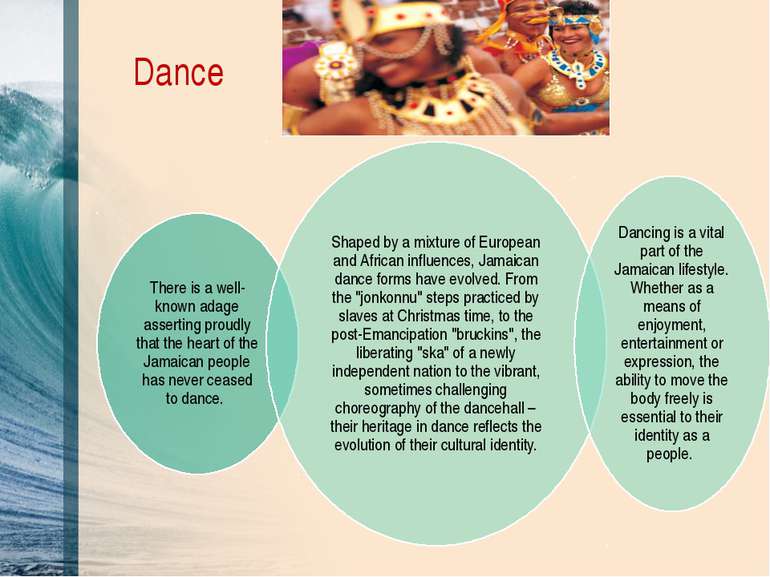 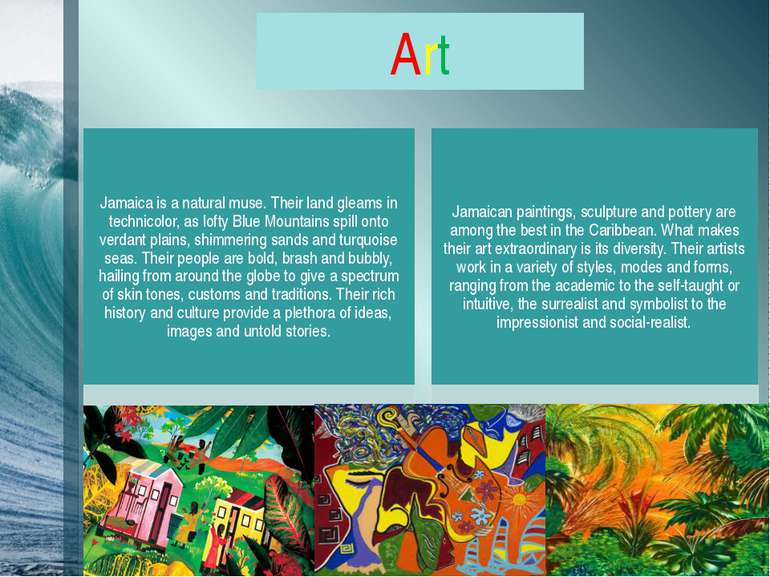 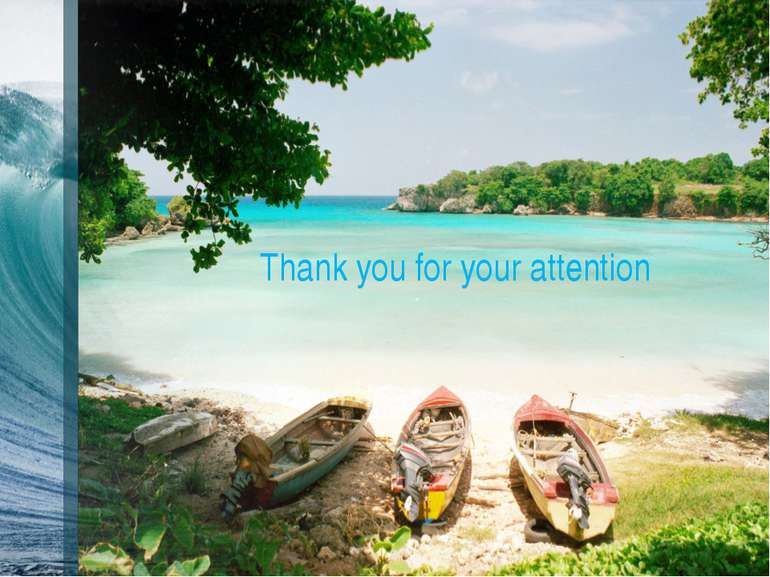 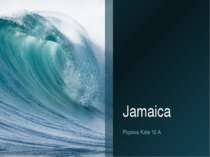 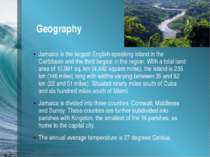 Geography Jamaica is the largest English-speaking island in the Caribbean and the third largest in the region. With a total land area of 10,991 sq. km (4,442 square miles), the island is 235 km (146 miles) long with widths varying between 35 and 82 km (22 and 51 miles). Situated ninety miles south of Cuba and six hundred miles south of Miami. Jamaica is divided into three counties, Cornwall, Middlesex and Surrey. These counties are further subdivided into parishes with Kingston, the smallest of the 14 parishes, as home to the capital city. The annual average temperature is 27 degrees Celsius. 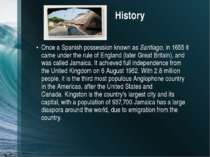 History Once a Spanish possession known as Santiago, in 1655 it came under the rule of England (later Great Britain), and was called Jamaica. It achieved full independence from the United Kingdom on 6 August 1962. With 2.8 million people, it is the third most populous Anglophone country in the Americas, after the United States and Canada. Kingston is the country's largest city and its capital, with a population of 937,700.Jamaica has a large diaspora around the world, due to emigration from the country. 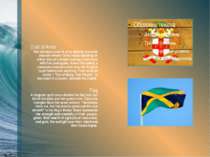 Coat of Arms The Jamaican coat of arms depicts one male and one female Taino Indian standing on either side of a shield, bearing a red cross with five pineapples. Above the shield, a Jamaican crocodile rests atop the English royal helmet and mantling. Their national motto – "Out of Many, One People", is inscribed in a banner, beneath the shield.  Flag A diagonal gold cross divides the flag into two black triangles and two green ones. Opposite triangles have the same colours. "Hardships there are, but the land is green and the sun shineth" is the flag's theme. Black represents the strength and creativity of their people; green, their wealth of agricultural resources; and gold, the sunlight over their island and their future hopes. 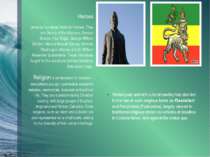 Heroes Jamaica has seven National Heroes. They are: Nanny of the Maroons, Samuel Sharpe, Paul Bogle, George William Gordon, Marcus Mosiah Garvey, Norman Washington Manley and Sir William Alexander Bustamante. These individuals fought for the social and political freedoms they enjoy today.  Religion is omnipresent in Jamaica – everywhere you go it permeates academic debates, ceremonies, business and political life. They are a predominantly Christian country, with large groups of Baptists, Anglicans and Roman Catholics. Other religions, such as Islam and Judaism are also represented on a small scale, adding to the diversity of their nation's heritage. Storied past and rich cultural medley has also led to the rise of such religious forms as Rastafari and Pocomania (Pukkumina), largely viewed in traditional religious circles as vehicles of rebellion in Colonial times, and against the status quo. 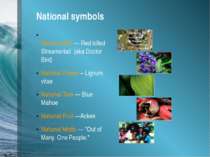 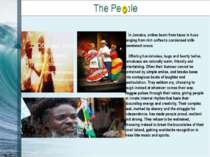 The People In Jamaica, smiles beam from faces in hues ranging from rich coffee to condensed milk-sweetened cocoa. Offering handshakes, hugs and hearty hellos, Jamaicans are naturally warm, friendly and entertaining. Often their humour cannot be contained by simple smiles, and breaks loose into contagious bouts of laughter and gesticulation. They seldom cry, choosing to laugh instead at whatever comes their way. Reggae pulses through their veins, giving people an innate internal rhythm that fuels their abounding energy and creativity. Their complex past, marked by slavery and the struggle for independence, has made people proud, resilient and strong. They refuse to be restrained, choosing instead to break the boundaries of their small island, gaining worldwide recognition in areas like music and sports. 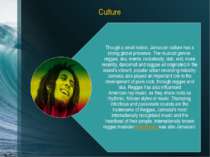 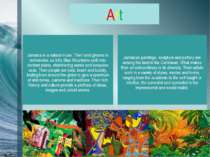 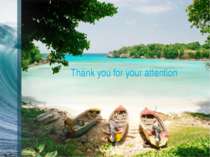 Thank you for your attention