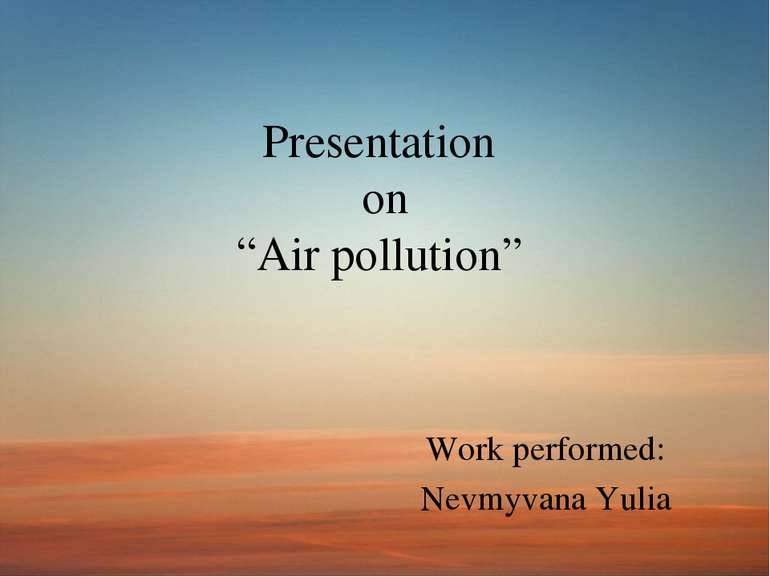 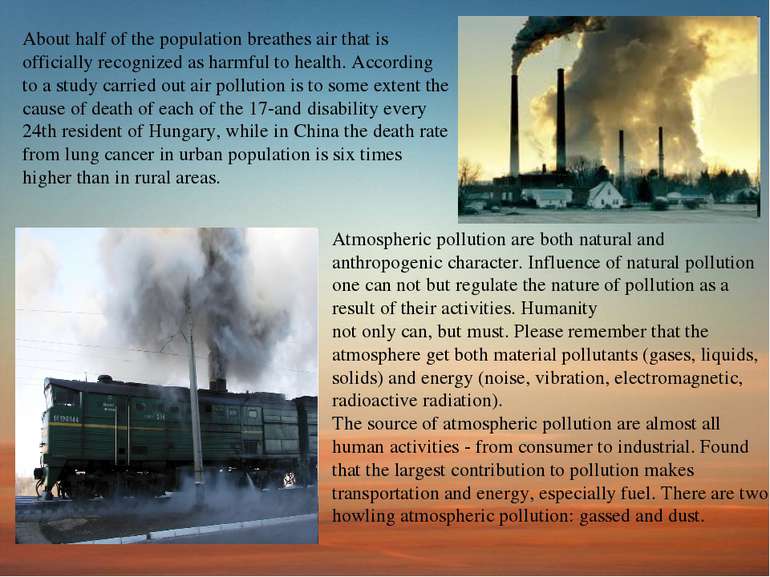 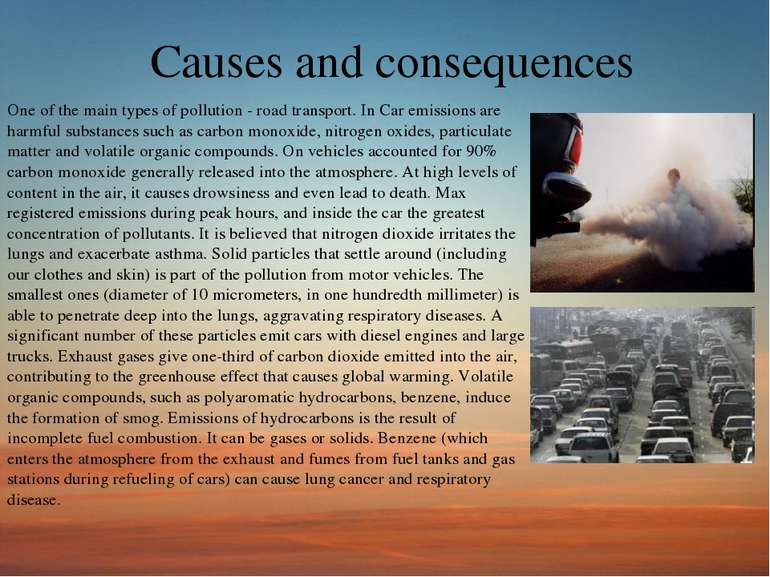 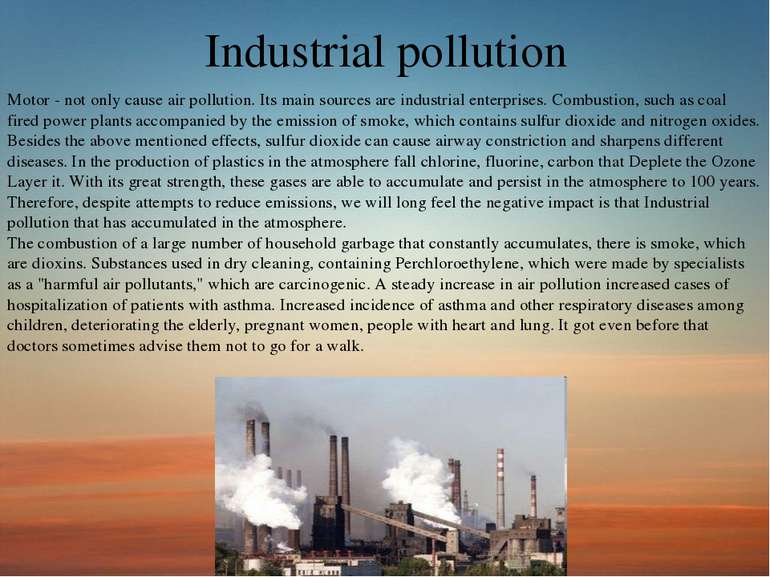 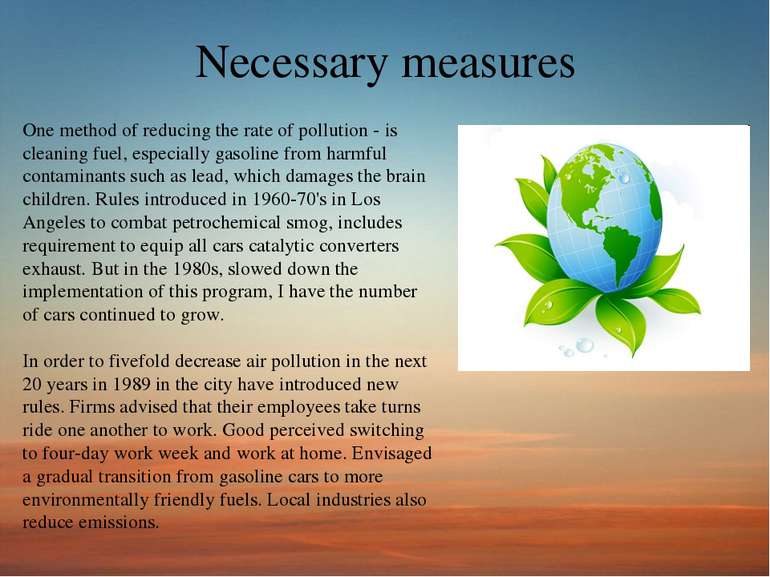 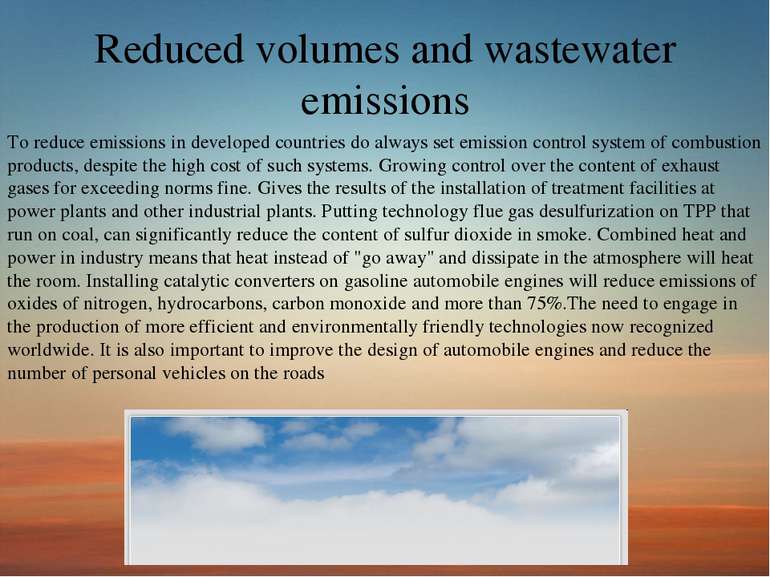 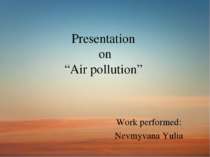 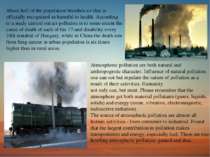 About half of the population breathes air that is officially recognized as harmful to health. According to a study carried out air pollution is to some extent the cause of death of each of the 17-and disability every 24th resident of Hungary, while in China the death rate from lung cancer in urban population is six times higher than in rural areas. Atmospheric pollution are both natural and anthropogenic character. Influence of natural pollution one can not but regulate the nature of pollution as a result of their activities. Humanity not only can, but must. Please remember that the atmosphere get both material pollutants (gases, liquids, solids) and energy (noise, vibration, electromagnetic, radioactive radiation). The source of atmospheric pollution are almost all human activities - from consumer to industrial. Found that the largest contribution to pollution makes transportation and energy, especially fuel. There are two howling atmospheric pollution: gassed and dust. 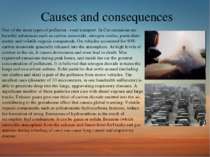 Causes and consequences One of the main types of pollution - road transport. In Car emissions are harmful substances such as carbon monoxide, nitrogen oxides, particulate matter and volatile organic compounds. On vehicles accounted for 90% carbon monoxide generally released into the atmosphere. At high levels of content in the air, it causes drowsiness and even lead to death. Max registered emissions during peak hours, and inside the car the greatest concentration of pollutants. It is believed that nitrogen dioxide irritates the lungs and exacerbate asthma. Solid particles that settle around (including our clothes and skin) is part of the pollution from motor vehicles. The smallest ones (diameter of 10 micrometers, in one hundredth millimeter) is able to penetrate deep into the lungs, aggravating respiratory diseases. A significant number of these particles emit cars with diesel engines and large trucks. Exhaust gases give one-third of carbon dioxide emitted into the air, contributing to the greenhouse effect that causes global warming. Volatile organic compounds, such as polyaromatic hydrocarbons, benzene, induce the formation of smog. Emissions of hydrocarbons is the result of incomplete fuel combustion. It can be gases or solids. Benzene (which enters the atmosphere from the exhaust and fumes from fuel tanks and gas stations during refueling of cars) can cause lung cancer and respiratory disease. 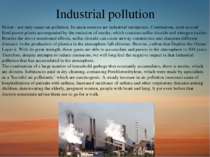 Industrial pollution Motor - not only cause air pollution. Its main sources are industrial enterprises. Combustion, such as coal fired power plants accompanied by the emission of smoke, which contains sulfur dioxide and nitrogen oxides. Besides the above mentioned effects, sulfur dioxide can cause airway constriction and sharpens different diseases. In the production of plastics in the atmosphere fall chlorine, fluorine, carbon that Deplete the Ozone Layer it. With its great strength, these gases are able to accumulate and persist in the atmosphere to 100 years. Therefore, despite attempts to reduce emissions, we will long feel the negative impact is that Industrial pollution that has accumulated in the atmosphere. The combustion of a large number of household garbage that constantly accumulates, there is smoke, which are dioxins. Substances used in dry cleaning, containing Perchloroethylene, which were made by specialists as a "harmful air pollutants," which are carcinogenic. A steady increase in air pollution increased cases of hospitalization of patients with asthma. Increased incidence of asthma and other respiratory diseases among children, deteriorating the elderly, pregnant women, people with heart and lung. It got even before that doctors sometimes advise them not to go for a walk. 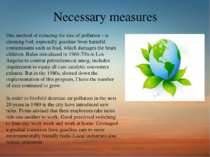 Necessary measures One method of reducing the rate of pollution - is cleaning fuel, especially gasoline from harmful contaminants such as lead, which damages the brain children. Rules introduced in 1960-70's in Los Angeles to combat petrochemical smog, includes requirement to equip all cars catalytic converters exhaust. But in the 1980s, slowed down the implementation of this program, I have the number of cars continued to grow. In order to fivefold decrease air pollution in the next 20 years in 1989 in the city have introduced new rules. Firms advised that their employees take turns ride one another to work. Good perceived switching to four-day work week and work at home. Envisaged a gradual transition from gasoline cars to more environmentally friendly fuels. Local industries also reduce emissions. 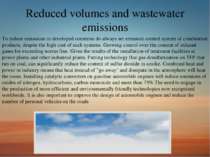 Reduced volumes and wastewater emissions To reduce emissions in developed countries do always set emission control system of combustion products, despite the high cost of such systems. Growing control over the content of exhaust gases for exceeding norms fine. Gives the results of the installation of treatment facilities at power plants and other industrial plants. Putting technology flue gas desulfurization on TPP that run on coal, can significantly reduce the content of sulfur dioxide in smoke. Combined heat and power in industry means that heat instead of "go away" and dissipate in the atmosphere will heat the room. Installing catalytic converters on gasoline automobile engines will reduce emissions of oxides of nitrogen, hydrocarbons, carbon monoxide and more than 75%.The need to engage in the production of more efficient and environmentally friendly technologies now recognized worldwide. It is also important to improve the design of automobile engines and reduce the number of personal vehicles on the roads 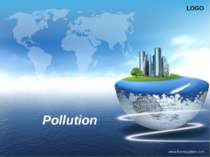 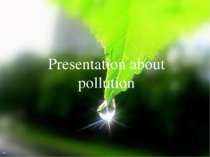 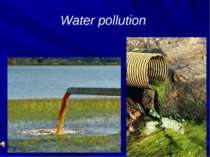 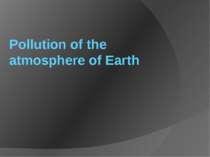 "Pollution of the atmosphere of Earth" 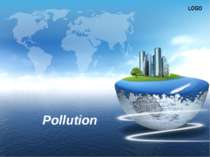